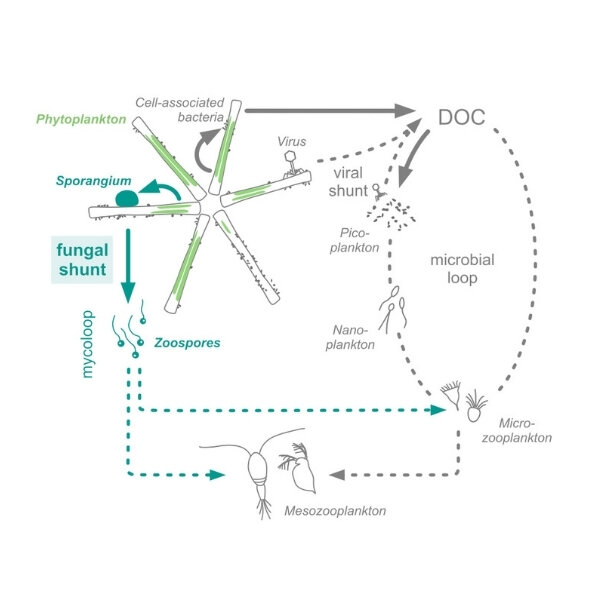 Tiny algae in Earth’s oceans and lakes take in sunlight and carbon dioxide and turn them into sugars that sustain the rest of the aquatic food web, gobbling up about as much carbon as all the world’s trees and plants combined.

New research shows a crucial piece has been missing from the conventional explanation for what happens between this first “fixing” of CO2 into phytoplankton and its eventual release to the atmosphere or descent to depths where it no longer contributes to global warming. The missing piece? Fungus.

“Basically, carbon moves up the food chain in aquatic environments differently than we commonly think it does,” said Anne Dekas, an assistant professor of Earth system science at Stanford University. Dekas is the senior author of a paper published June 1 in Proceedings of the National Academy of Sciences that quantifies how much carbon goes into parasitic fungi that attack microalgae.

Researchers until now have predicted that most carbon fixed into colonies of hard-shelled, single-celled algae known as diatoms then funnels directly into bacteria—or dissolves like tea in the surrounding water, where it’s largely taken up by other bacteria. Conventional thinking assumes carbon escapes from this microbial loop mainly through larger organisms that graze on the bacteria or diatoms, or through the CO2 that returns to the atmosphere as the microbes breathe.

This journey is important in the context of climate change. “For carbon sequestration to occur, carbon from CO2 needs to go up the food chain into big enough pieces of biomass that it can sink down into the bottom of the ocean,” Dekas said. “That’s how it’s really removed from the atmosphere. If it just cycles for long periods in the surface of the ocean, it can be released back to the air as CO2.”

It turns out fungus creates an underappreciated express lane for carbon, “shunting” as much as 20 percent of the carbon fixed by diatoms out of the microbial loop and into the fungal parasite. “Instead of going through this merry-go-round, where the carbon could eventually go back to the atmosphere, you have a more direct route to the higher levels in the food web,” Dekas said.

The findings also have implications for industrial and recreational settings that deal with harmful algal blooms. “In aquaculture, in order to keep the primary crop, like fish, healthy, fungicides might be added to the water,” Dekas said. That will prevent fungal infection of the fish, but it may also eliminate a natural check on algal blooms that cost the industry some $8 billion per year. “Until we understand the dynamics between these organisms, we need to be pretty careful about the management policies we’re using.”

The authors based their estimates on experiments with populations of chytrid fungi called Rhizophydiales and their host, a type of freshwater algae or diatom named Asterionella formosa. Coauthors in Germany worked to isolate these microbes, as well as bacteria found in and around their cells, from water collected from Lake Stechlin, about 60 miles north of Berlin.

“Isolating one microorganism from nature and growing it in the laboratory is difficult, but isolating and maintaining two microorganisms as a pathosystem, in which one kills the other, is a true challenge,” said lead author Isabell Klawonn, who worked on the research as a postdoctoral scholar in Dekas’ lab at Stanford. “Only a few model systems are therefore available to research such parasitic interactions.”

Scientists surmised as early as the 1940s that parasites played an important role in controlling the abundance of phytoplankton, and they observed epidemics of chytrid fungus infecting Asterionella blooms in lake water. Technological advances have made it possible to pick apart these invisible worlds in fine and measurable detail—and begin to see their influence in a much bigger picture.

“We’re realizing as a community that it’s not just the capabilities of an individual microorganism that’s important for understanding what happens in the environment. It’s how these microorganisms interact,” Dekas said.

The authors measured and analyzed interactions within the Lake Stechlin pathosystem using genomic sequencing; a fluorescence microscopy technique that involves attaching fluorescent dye to RNA within microbial cells; and a highly specialized instrument at Stanford—one of only a few dozen in the world—called NanoSIMS, which creates nanoscale maps of the isotopes of elements that are present in materials in vanishingly small amounts. Dekas said, “To get these single-cell measurements to show how photosynthetic carbon is flowing between specific cells, from the diatom to the fungus to the associated bacteria, it’s the only way to do it.”

The exact amount of carbon diverted to fungus from the microbial merry-go-round may differ in other environments. But the discovery that it can be as high as 20 percent in even one setting is significant, Dekas said. “If you’re changing this system by more than a few percent in any direction, it can have dramatic implications for biogeochemical cycling. It makes a big difference for our climate.”