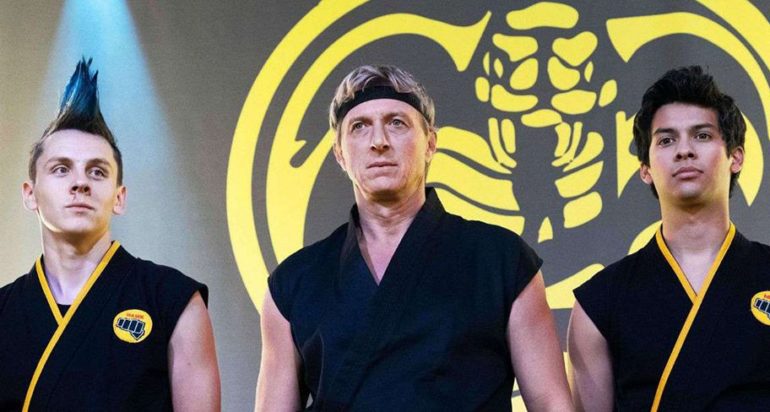 Cobra Kai season 3 is coming, with a teaser from streaming giant Netflix showing a little of what we might expect when it arrives on the service in 2021.

Whether you binged the Karate Kid follow-up after its recent Netflix release or you’ve been a fan since its YouTube Red debut, there’s plenty to be excited about as we look ahead to Cobra Kai season 3. Still, at the risk of being an overprotective sensei, it’s on us to warn you that this article is going to contain some pretty massive spoilers for season 1 and 2 of Cobra Kai as we discuss what might happen next.

At the end of Cobra Kai season 2, things look pretty bad for most of the characters. Kreese (Martin Kove), surprising no-one, went full villain, revealing he’d managed to swindle both the Cobra Kai gym and its students away from Johnny Lawrence (William Zabka). Lawrence’s star pupil Miguel (Xolo Maridueña) is in intensive care after taking a tumble during a brawl between the Miyagi-Do dojo belonging to Daniel LaRusso (Ralph Macchio) and the Cobra Kai kids.

LaRusso hasn’t escaped entirely unscathed, either. His obsession with Cobra Kai has driven away his wife, and his daughter Sam (Mary Mouser) is in the hospital thanks to the injuries she suffered in the Cobra Kai / Miyagi-Do punch up.

The show ends with both Johnny and Daniel in pieces, blaming themselves for the mess that closes out the second season of Cobra Kai.

And that’s Cobra Kai in a nutshell. It offers something you don’t really get elsewhere. On the one hand it’s a show about middle-aged men and the damage their obsession with the past is doing to them and the people around them. On the other, it’s about two rival dojos of hormone-fuelled, teenage karate masters kicking seven shades out of each other.

If you’re eagerly awaiting Cobra Kai season 3 – and after that description we can’t imagine why you wouldn’t be – here’s everything there is to know so far.

Cobra Kai season 3 release date: when is it coming to Netflix?

In short… sometime in 2021. However, fans of Karate and nostalgia probably won’t have to wait too long. While the coronavirus pandemic has hurt most ongoing productions, Cobra Kai Season 3 has already filmed and was going through its finishing touches when the lockdown hit.

Speaking to CBR, series co-creator and executive producer Josh Heald confirmed that principal photography wrapped before the end of 2019, and the show is pretty much good to go.

“Thankfully with season 3, we wrapped production before the end of 2019 and we wrapped post-production…I think there was a little bit of overlap,” Heald told CBR. “We were still doing some finishing touches for the effects and some quality checks on season 3 while the quarantine aspect of the pandemic was just beginning but we finished our final mix – the last big piece of post-production – that was done in-person with raising champagne and eating cupcakes and all the things you do to feel like you’re at your absolute unhealthiest coming out of the completion of a season.”

So, Cobra Kai is in the can. As one of Netflix’s newest acquisitions, it seems like it’s really up to the streaming giant when they want to release Cobra Kai season 3.

There aren’t too many story details from Cobra Kai season 3. The recently released Cobra Kai trailer from Netflix is mostly cut together with clips from S1 and S2 we’ve already seen, with a brief tease for season 3. However, the scant footage we get at the end of the trailer offers some interesting insights.

So, Daniel is off to Okinawa, a place he last visited in The Karate Kid II. This opens the door for the return of The Karate Kid II characters like Chozen (Yuji Okumoto) and Kumiko (Tamlyn Tomita). Chozen was Daniel’s enemy in Okinawa, while Kumiko was his love interest. Questions persist, though: will Johnny and Miguel go to Okinawa too? What secrets did Mr Miyagi keep from LaRusso?

As we find out more about the story of Cobra Kai season 3, we’ll add it here. For now, Netflix is keeping a lot of information about season 3 close to its chest.

Cobra Kai season 3 cast: who we expect to return

The Netflix teaser reveals very little on who might be reappearing for season 3. Original characters Daniel LaRusso (Ralph Macchio) and Johnny Lawrence (William Zabka) will return, in addition to Miguel (Xolo Maridueña).

There are still story threads hanging around for a few characters you should expect to make a return, although we’re not a hundred percent certain they’re going to be making an appearance just yet.

There’s Robby Keene, Johnny’s son, for one. He’s spent the last two seasons training under Daniel LaRusso. After he was responsible for the fall that put Miguel on life-support, he fled for the hills.

There’s also John Kreese, who is currently in charge of the titular Cobra Kai dojo after stealing it in the shocking season 2 finale. He’s definitely cruising for a bruising at this point, and it wouldn’t be a satisfying season 3 if he didn’t get at least some form of comeuppance.

Then, there’s Miguel’s mother Carmen Diaz (Vanessa Rubio) who was also, briefly, Johnny’s love interest towards the end of season 2. Diaz represents a happier life and a path towards normality, so it’d be great to see her return here. Season 2 ended with Johnny missing a Facebook friend request from high school girlfriend and Karate Kid character Ali Mills (played by Elisabeth Shue in the original film), which could mean we’ll have some sort of love triangle on our hands in the new series.

For now though, much of this is wishful thinking. You can put all of these potential returning characters on the ‘maybe’ pile, since Netflix is keeping quiet about who might be reappearing for the time being.