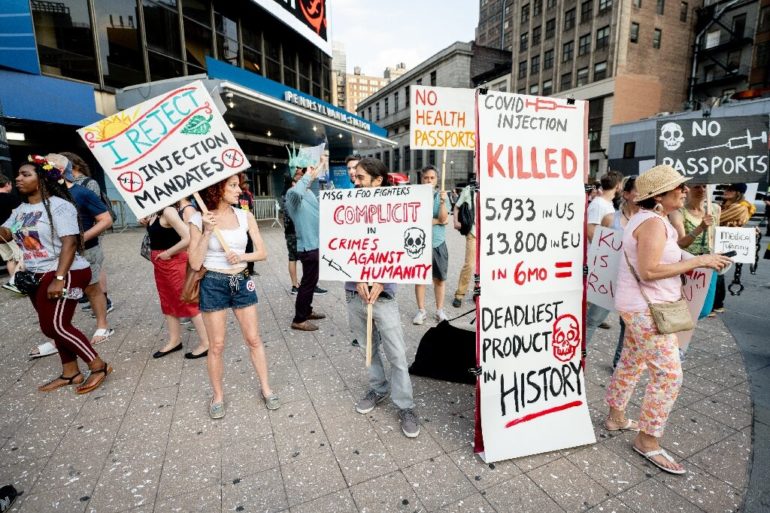 Scientific studies with poor methodology and inaccurate findings are exacerbating a COVID-19 misinformation crisis that is discouraging vaccination and putting lives at risk.

The intense public interest in the pandemic and divisive debate in the United States over how to address it facilitates the spread of faulty research papers online, including by vaccine opponents. And even if a study is retracted, it is too late.

“Once the paper is published, the damage is irrevocable,” said Emerson Brooking, resident senior fellow at the Atlantic Council’s Digital Forensic Research Lab, which focuses on identifying and exposing disinformation.

Flawed papers “have been fuel to the fire for COVID-19 skeptics and conspiracy theorists. They are frequently the subject of viral online activity. Their findings are further filtered through salacious and misleading articles from fringe websites,” Brooking told AFP.

Inaccurate information about vaccines is especially dangerous at a time when uptake of the shots has slowed in the United States, where health officials say almost all recent COVID-19 deaths occurred among those who were not immunized.

‘Shock your socks off’

Medical journal Vaccines published a peer-reviewed paper in late June titled “The Safety of COVID-19 vaccinations—we should rethink the policy.” It concluded that COVID-19 shots were causing two people to die for every three they saved—findings that quickly spread on social media.

A tweet from scientist and COVID-19 vaccine critic Robert Malone summarizing the paper garnered thousands of retweets. A video in which conservative pundit Liz Wheeler discussed the study—which she said “will shock your socks off”—has been viewed more than 250,000 times on Facebook.

But Vaccines then retracted the paper, saying it contained “several errors that fundamentally affect the interpretation of the findings.”

At least four Vaccines board members resigned as a result of the study’s publication, including Katie Ewer, an associate professor and senior immunologist at the University of Oxford’s Jenner Institute.

“It should have been recognized that this paper would have a big impact,” said Ewer, who was not involved in its publication. “That no one at the journal picked up on that… is very worrying, especially for a journal dedicated to vaccines.”

Malone’s tweet about the paper is no longer available, but Wheeler’s video still appeared on Facebook weeks later.

The Gateway Pundit, a website that frequently publishes inaccurate claims, reported earlier in the year that a Stanford University study found mask wearing, which US health authorities recommended to help slow the spread of COVID-19, to be “ineffective” and harmful.

‘Do a better job’

The study—”Facemasks in the COVID-19 era: A health hypothesis”—was subsequently retracted by the journal Medical Hypotheses, which said it selectively cited published papers and included “unverified” data.

The Gateway Pundit’s article—which has been shared tens of thousands of times as a link or screenshot on social media—was updated to say the study’s author was unaffiliated with Stanford, but it failed to mention the retraction.

In Apps and WebGamingSmartphones
on 21 July 20216 min read

Some of the biggest scientific journals, including The Lancet and the New England Journal of Medicine, have retracted papers related to the coronavirus crisis, and even a limited number of faulty studies can cause extensive damage online.

Scientific papers have been drawn into the public eye in “an unprecedented way,” so experts must “do a better job” of explaining their work to a lay audience that may lack the skills to assess them, said Maimuna Majumder, a computational epidemiologist at the Harvard Medical School.

“Not all of the studies that have been produced and widely shared during the pandemic have been scientifically robust,” Majumder said.

“This is particularly troubling because poorly-executed studies have proven to be capable of influencing individual-level decision-making during the pandemic, including those pertaining to vaccination.”

CDC: COVID-19 vaccine can be given along with other shots