Google says it has created a time crystal in a quantum computer, and it’s weirder than you can imagine 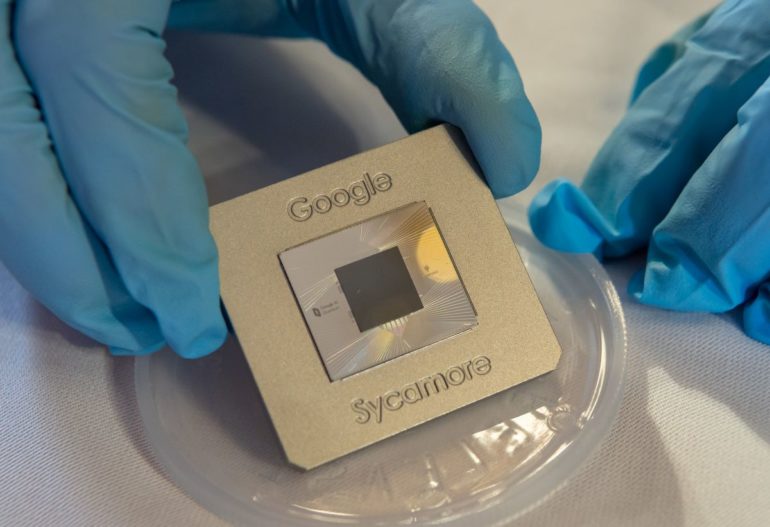 In a new research paper, Google scientists claim to have used a quantum processor for a useful scientific application: to observe a genuine time crystal.

If ‘time crystal’ sounds pretty sci-fi that’s because they are. Time crystals are no less than a new “phase of matter”, as researchers put it, which has been theorized for some years now as a new state that could potentially join the ranks of solids, liquids, gases, crystals and so on. The paper remains in pre-print and still requires peer review.

Time crystals are also hard to find. But Google’s scientists now rather excitingly say that their results establish a “scalable approach” to study time crystals on current quantum processors.

Understanding why time crystals are interesting requires a little bit of background in physics – particularly, knowledge of the second law of thermodynamics, which states that systems naturally tend towards an arrangement with the lowest possible energy, also known as thermal equilibrium. This is why an ice cube melts in a glass of water at room temperature, for example.

This irresistible drive towards thermal equilibrium, as described in the second law of thermodynamics, is reflective of the fact that all things tend to move towards less useful, random states. As time goes on, systems inevitably degenerate into chaos and disorder, a notion that is known as entropy.

Time crystals, on the other hand, fail to settle in thermal equilibrium. Instead of slowly degenerating towards randomness, they get stuck in two high-energy configurations that they switch between – and this back-and-forth process can go on forever, in what scientists describe as “perpetual motion”.

To explain this better, Curt von Keyserlingk, lecturer at the school of physics and astronomy at the University of Birmingham, who did not participate in Google’s latest experiment, pulls out some slides from an introductory talk to prospective undergraduate students. “They usually pretend to understand, so it might be useful,” von Keyserlingk warns ZDNet.

It starts with a thought experiment: take a box in a closed system that is isolated from the rest of the universe, load it with a couple of dozens of coins and shake it a million times. As the coins bounce off each other, they randomly move positions and increasingly become more chaotic. Upon opening the box, the expectation is that you will be faced with roughly half the coins on their heads side, and half on their tails.

This closed system, when it is translated into the quantum domain, is the perfect setting to try and find time crystals, and the only one known to date. “The only stable time crystals that we’ve envisioned in closed systems are quantum mechanical,” says von Keyserlingk.

Enter Google’s quantum processor, Sycamore, which is well known for having achieved quantum supremacy and is now looking for some kind of useful application for quantum computing.

A quantum processor, by definition, is a perfect tool to replicate a quantum mechanical system. In this scenario, Google’s team represented the coins in the box with qubits spinning upwards and downwards in a closed system; and instead of shaking the box, they applied a set of specific quantum operations that can change the state of the qubits, which they repeated many times.

This is where time crystals defy all expectations. Looking at the system after a certain number of operations, or shakes, reveals a configuration of qubits that is not random, but instead looks rather similar to the original set up.

“The first ingredient that makes up a time crystal is that it remembers what it was doing initially. It doesn’t forget,” says von Keyserlingk. “The coins-in-a-box system forgets, but a time crystal system doesn’t.”

And no matter how many operations are carried out on the system, it will always flip-flop, going regularly back-and-forth between those two states.

Scientists call this a break in the symmetry of time – which is why time crystals are called so. This is because the operation carried out to stimulate the system is always the same, and yet the response only comes every other shake.

“In the Google experiment, they do a set of operations on this chain of spins, then they do exactly the same thing again, and again. They do the same thing at the hundredth step that they do at the millionth step, if they go that far,” says von Keyserlingk.

“So they subject the system to a set of conditions that have symmetry, and yet the system responds in a manner that breaks that symmetry. It’s the same every two periods instead of every period. That’s what makes it literally a time crystal.”

The behavior of time crystals, from a scientific perspective, is fascinating: contrary to every other known system, they don’t tend towards disorder and chaos. Unlike the coins in the box, which get all muddled up and settle at roughly half heads and half tails, they buck the entropy law by getting stuck in a special, time-crystal state.

In other words, they defy the second law of thermodynamics, which essentially defines the direction that all natural events take. Ponder that for a moment.

Such special systems are not easy to observe. Time crystals have been a topic of interest since 2012, when Nobel Prize-winning MIT professor Frank Wilczek started thinking about them; and the theory has been refuted, debated and contradicted many times since then.

Several attempts have been made to create and observe time crystals to date, with varying degrees of success. Only last month, a team from Delft University of Technology in the Netherlands published a pre-print showing that they had built a time crystal in a diamond processor, although a smaller system than the one claimed by Google.

The search giant’s researchers used a chip with 20 qubits to serve as the time crystal – many more, according to von Keyserlingk, than has been achieved until now, and than could be achieved with a classical computer.

Using a laptop, it is fairly easy to simulate around 10 qubits, explains von Keyserlingk. Add more than that, and the limits of current hardware are soon reached: every extra qubit requires exponential amounts of memory.

The scientist stops short of stating that this new experiment is a show of quantum supremacy. “They’re not quite far enough for me to be able to say it’s impossible to do with a classical computer, because there might be a clever way of putting it on a classical computer that I haven’t thought of,” says von Keyserlingk.

“But I think this is by far the most convincing experimental demonstration of a time crystal to date.”

SEE: Quantum computing just took on another big challenge, one that could be as tough as steel

The scope and control of Google’s experiment means that it is possible to look at time crystals for longer, do detailed sets of measurements, vary the size of the system, and so on. In other words, it is a useful demonstration that could genuinely advance science – and as such, it could be key in showing the central role that quantum simulators will play in enabling discoveries in physics.

There are, of course, some caveats. Like all quantum computers, Google’s processor still suffers from decoherence, which can cause a decay in the qubits’ quantum states, and means that time crystals’ oscillations inevitably die out as the environment interferes with the system.

The pre-print, however, argues that as the processor becomes more effectively isolated, this issue could be mitigated.

One thing is certain: time crystals won’t be sitting in our living rooms any time soon, because scientists are yet to find a definitive useful application for them. It is unlikely, therefore, that Google’s experiment was about exploring the business value of time crystals; rather, it shows what could potentially be another early application of quantum computing, and yet another demonstration of the company’s technological prowess in a hotly contested new area of development.