How Amazon fought the union drive in Alabama 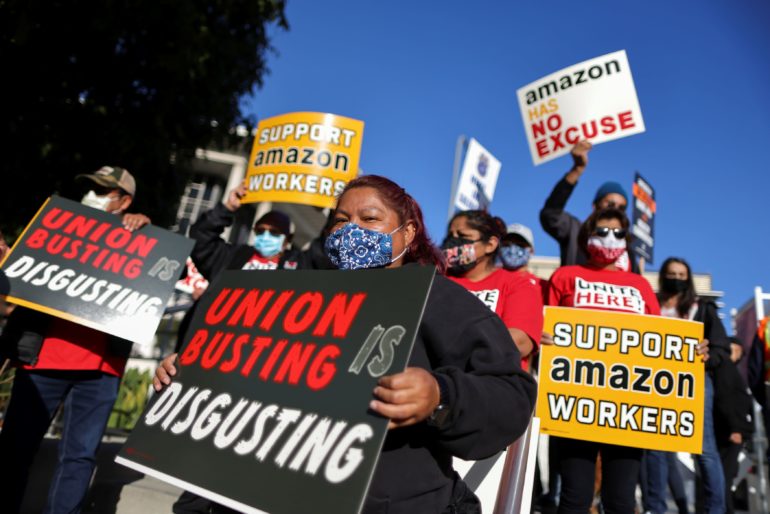 Amazon last week soundly defeated a union drive at one of its Alabama warehouses, a major win for the e-commerce giant, which has long fought unionization attempts at its facilities.

Workers at the Bessemer, Alabama, warehouse voted overwhelmingly in favor of rejecting unionization, with fewer than 30% of the votes tallied in favor. The Retail, Wholesale and Department Store Union, which led the union drive, intends to challenge the outcome, arguing that Amazon broke the law with some of its anti-union activity before and during voting.

According to multiple workers and union representatives who described the tactics, Amazon unleashed an aggressive public relations campaign at BHM1, including text messages to employees, leaflets, a website that urged workers to “do it without dues” and fliers posted in bathrooms that urged workers to “vote ‘NO.'”

Amazon’s greatest opportunity to influence workers came in the form of so-called captive audience meetings, which workers were required to attend during their shift. Amazon held the meetings weekly from late January up until ballots were sent out in early February. Workers sat for approximately 30 minutes through PowerPoint presentations discouraging unionization and were given the opportunity to ask Amazon representatives questions.

Captive audience meetings are a common tactic used by employers during union campaigns. Supporters of proposed labor law reforms, such as the Protecting the Right to Organize Act, which awaits passage in the Senate, have argued that captive audience meetings serve as a forum for employers to deliver anti-union messages “without giving the union an opportunity to respond.” The PRO Act would prohibit employers from making these meetings mandatory.

Amazon said it hosted ongoing meetings in small groups as a way for employees to get all the facts about joining a union and about the election process itself.

The company also defended its response to the union campaign more broadly, arguing in a statement following the result that workers “heard far more anti-Amazon messages from the union, policymakers and media outlets than they heard from us.”

Why some voted ‘no’

Amazon’s messaging in the meetings was more convincing for some BHM1 workers than others.

One Bessemer employee, who started working at Amazon last year, said he felt Amazon used some scare tactics when talking to workers about the union but also told CNBC he didn’t understand how the union would help workers at BHM1. This person, who asked for anonymity to prevent retaliation, said the RWDSU did not explain what they were going to do for workers and did not respond to his request for information about how they had helped employees at other job sites.

Beyond his doubts about the RWDSU, this employee said he’s also had a primarily positive experience working for Amazon. While some workers complained about the stressful, demanding nature of the job, he said a previous construction job prepared him for the physical labor of warehouse work, so he finds it easy. Amazon’s pay and benefits are also a step up from his previous job.

In the end, this worker voted against unionization.

In private Facebook groups where Amazon workers engage with each other, other BHM1 employees shared their thoughts about the union campaign. One worker feared that if the union was voted in, employees would lose access to certain benefits provided by Amazon, such as its upskilling program, where Amazon pays a percentage of tuition costs to train warehouse workers for jobs in other high-demand fields.

Another worker felt that a union wasn’t necessary, asserting that if you work hard you can succeed at Amazon: “I voted no. Amazon is just a game, with rules. Learn the rules, play the game, move up, win.”

One BHM1 employee who works as a stower, which involves transferring items into vacant storage bins throughout the facility, said Amazon designed the texts, fliers and mandatory meetings to convey a message that the union wouldn’t help anybody. This worker requested anonymity out of concern for losing his job.

The worker, who voted for the union, said he was wary of showing support for unionization in front of Amazon and his coworkers, and was nervous to ask questions, instead playing dumb to avoid getting fired.

In one mandatory meeting held before ballots were distributed in February, this worker said, Amazon sought to cast doubt on how workers’ dues would be spent by telling workers that the RWDSU spent more than $100,000 a year on vehicles for employees. The worker was skeptical of Amazon’s presentation, thinking that Amazon likely spent a lot more on cars each year than the union did.

Union President Stuart Appelbaum said in an interview that the RWDSU purchases cars for some representatives whose job it is to travel from workplace to workplace to represent and service members.

Amazon said it wanted to explain to workers, particularly those with no previous knowledge of unions, that a union is a business that collects dues and explain how those dues may be used.

In another mandatory meeting, the two Bessemer workers told CNBC, Amazon circulated examples of previous contracts the RWDSU had won, trying to highlight the union’s shortcomings. Amazon also asserted that the RWDSU was primarily a poultry workers’ union that had limited experience representing warehouse workers.

Appelbaum said poultry workers make up a significant share of the RWDSU’s membership in Alabama, and many of the organizers who led the campaign, and approached Amazon workers outside BHM1 as they wrapped up their shifts, came from nearby poultry plants. The union also represents workers in other industries, including retail, food production, nonprofit and cannabis, said RWDSU spokesperson Chelsea Connor.

In response to questions about whether it characterized the RWDSU as a poultry union, Amazon said it sought to highlight to workers how well, or poorly, the union might understand their employer.

During the meetings, Amazon also sought to highlight negative outcomes that could arise from voting for the union. Amazon told workers the union could force workers to go on strike and that employees could lose their benefits in the future, workers told CNBC.

The RWDSU’s Mid-South office, which led the organizing at Amazon, countered Amazon’s claim that the union would force BHM1 workers to go on strike, calling it a “fear tactic,” according to communications distributed to workers.

“Amazon has insinuated that the union will ‘pull you out on a strike,'” said Randy Hadley, president of the Mid-South Council, in a February letter to workers, which also addresses other claims made by Amazon. “Here are the facts, our membership and our membership ONLY controls whether or not to strike by a super majority. This means nearly 4,000 Amazon workers would have to vote to go on strike. A strike can be useful when needed, but it is also very, very rare. This is yet another fear tactic by Amazon.”

Amazon said it sought to point out to workers that if a union is voted in, the union could call for a strike, as it’s the union’s main leverage over an employer.

In response to questions asking whether it told workers they could lose their benefits if a union is voted in, Amazon said it looked to inform employees, as part of general education about unions, that there are many outcomes that can result from collective bargaining negotiations.

Not the last effort

Amazon employees, labor leaders and worker advocates are hopeful that the loss in Alabama won’t be the last attempt at organizing the retail giant’s sprawling workforce.

There may be future campaigns at BHM1, too. The worker who voted for the union said some pro-union employees have discussed the possibility of approaching the Teamsters and pursuing a future union campaign at their warehouse.

Elsewhere, Amazon workers and labor unions are considering different organizing strategies. The Teamsters is communicating with Amazon drivers and warehouse workers at a facility in Iowa and considering paths to rally workers beyond the election process. Amazon workers in Chicago have formed a group to organize employees at facilities in the area, called Amazonians United Chicagoland.

A worker at an Amazon facility in New Jersey, who also requested anonymity, said they previously approached a union about organizing their facility. After seeing the outcome in Bessemer, the worker said they’re going back to the drawing board and looking into more informal tactics for achieving leverage.

Susan Schurman, a professor at Rutgers University’s School of Management and Labor Relations, pointed to the Alphabet Workers Union, a recently formed minority union of more than 800 Google employees, as a potential model for Amazon workers.

Unlike traditional unions, minority unions don’t represent the majority of workers, only those who opt to join. They also aren’t recognized by the NLRB, and they don’t act as bargaining agents with employers.

However, Schurman said minority unions can serve as a “pathway to majority unions” and can be a powerful tool for building worker support even before launching a formal campaign with the NLRB.

“Why not stay and build an organization and keep at it?” Schurman said. “Let workers recruit new members and demonstrate the value of a collective negotiating power.”

Appelbaum, the RWDSU president, said a minority union strategy is “well worth thinking about.”

“We haven’t made a decision on that yet, but I think we’ll look at it,” Appelbaum said. “We know we’re not going away.”