How do archaeologists know where to dig? 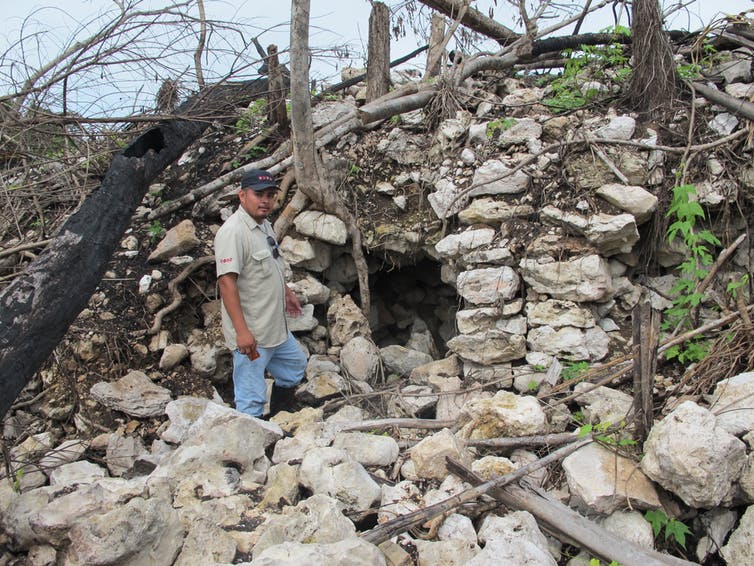 National Geographic magazines and Indiana Jones movies might have you picturing archaeologists excavating near Egyptian pyramids, Stonehenge and Machu Picchu. And some of us do work at these famous places.

But archaeologists like us want to learn about how people from the past lived all over the planet. We rely on left-behind artifacts to help fill out that picture. We need to excavate in places where there’s evidence of human activity – those clues from the past aren’t always as obvious as a giant pyramid, though.

Finding that evidence can be as simple as strolling past clearly distinguishable ruins – ah, there are some broken pots or carved stones right over there. It can be as complex as using lasers, satellite imagery and other new geophysical techniques to reveal long-lost structures. The right skills and tools are helping researchers locate traces from the past that would have been overlooked even a few decades ago.

The simplest and oldest identification method is a pedestrian survey: looking for evidence of human activity, either on unstructured strolls or when walking in a grid. Unless the evidence is crystal clear – like those broken pots – such surveys usually need a trained eye to read the clues.

In Belize, where one of us (Gabe) works, remains of houses and even large temple pyramids that were abandoned over 1,000 years ago are usually covered in trees and plants; exposed sections look like stone piles.

I brought my father to a site where workers had removed the thick foliage so archaeologists could thoroughly map the site. Another archaeologist and I excitedly discussed the visible architectural features – patios, terraces, the stubs of walls. Finally, my dad threw his hands up in the air and said “All I see are rocks!”

But our trained eyes recognized that the piles of stones or earthen mounds we saw were suspiciously aligned. Stare at archaeological sites long enough and you’ll notice them too.

Understanding what you see also can require familiarity with local geology and flora. And who is more familiar than the people who live in a region? It pays for archaeologists to make friends with the locals and to be very respectful of their knowledge. In my work in Belize, most of the settlement and ritual cave sites where my students and I work were initially identified by local hunters who know the forest and its landmarks intimately.

One time, I was walking through the jungle in Belize when a local friend of mine stopped suddenly in what appeared to me as a random cluster of trees. He said “This must have been someone’s farm.” He’d seen specific domestic plants that are commonly found in gardens in his village. Not being as familiar with local flora, I never would have noticed this subtle difference. So, even living plants can be considered part of human-modified archaeological sites.

In recent years, archaeologists have begun to use new methods to find archaeological sites that had previously been overlooked. These techniques, broadly referred to as remote sensing, allow us to peer through dense forests without clearing them, digitally removing jungle growth and centuries of soil to reveal long-lost structures hidden beneath. High-resolution scans using lasers or 3D photographs can even detect subtle undulations of ground surfaces that are not visible to the human eye.

For instance, LiDAR – light detection and ranging – fires pulsed lasers to determine distance based on what reflects back and how quickly. When used from a plane, millions of points are collected, resulting in a detailed topographic map of the landscape. Specialists working with these data can remove trees and other objects to digitally expose ground surfaces.

A recent example at the ancient Maya city of Tikal, Guatemala, revealed around 61,000 structures in the jungles surrounding the city’s center. The density of settlement came as a shock because, despite extensive pedestrian survey in the past, even experienced archaeologists failed to recognize most of these ephemeral remains.

Increasingly, archaeologists find sites by searching satellite imagery, including Google Earth. For instance, during a recent drought in England, the remains of ancient features began to appear across the landscape and were visible from above.

Remote sensing can also focus on smaller areas. Geophysical techniques are commonly used before excavating to scan the ground where researchers know archaeological remains are buried. These nondestructive methods help pick out buried anomalies from surrounding soils by distinguishing their density, magnetic properties or conduction of electrical currents.

In AIApps and WebCompaniesSmartphones
on 4 February 20217 min read

[Deep knowledge, daily. Sign up for The Conversation’s newsletter.]

The shape and alignment of these features can often provide clues about what they are. For instance, the dense walls of a building will show up as distinct from the surrounding soil.

What will archaeologists of the future find?

As you look around for evidence of human activity in the past, remember you’re actively involved in making the archaeological sites of the future. Since archaeology is the study of anything material left behind by human beings, that definition also fits what remains after Nevada’s annual Burning Man festival, for example, or as migrants journey across the U.S.-Mexico border.

In fact, there are archaeological sites nearly everywhere you look. One of us (Stacey) once studied trash left behind during tailgating parties. My students and I wanted to understand if alumni and students were drinking different types of alcohol. Using archaeological methodologies, we discovered that alumni partied with expensive alcohol, such as wine and microbrews, while students drank what they could afford: cheap, corporate beers, with Coors Light and Bud Light being the most common beers of choice.

We made this archaeological “discovery” by carefully mapping and identifying trash prior to and during the game. While most of it was picked up, smaller pieces undoubtedly found their way into the soil, perhaps to be discovered by a future Campus Archaeology Program.

We archaeologists used to dig primarily at sites that were easy to find. Technology is changing that. In fact, applications like Google Earth are making possible a new era of citizen science, with researchers sometimes enlisting the help of members of the public to comb through data. Through efforts by archaeologists to engage and educate the public, including incorporating volunteers into lab and field work, giving public lectures and workshops, and creating accessible web resources, we hope to show that the story of our past is often hidden in plain sight.