How Google won over biggest critics of San Jose megacampus 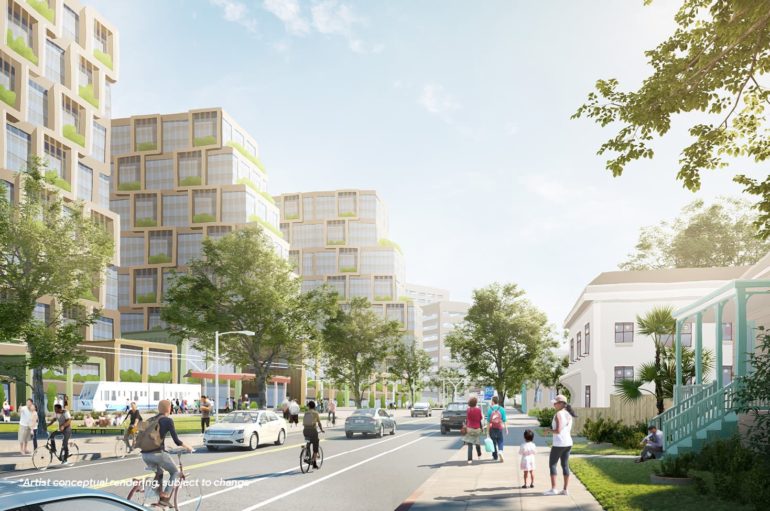 Google’s path to its massive tech campus planning in San Jose began with activists chaining themselves to chairs inside City Hall over the city’s decision to sell public land to the tech giant. It ended with some of its biggest opponents signing its praises.

Last month, the San Jose City Council approved Google’s plan for a mixed-use megacampus that spans 80 acres and 7.3 million square feet of office space in the heart of California’s third-largest city. To win over critics, Google designated more than half of its campus to public use and offered up a $200 million community benefits package that includes displacement funds, job placement training, and power for community leaders to influence how it’s spent.

“It’s certainly a much different process in the end versus what we saw at the beginning with regards to community and labor movement,” said Jeffrey Buchanan, director of public policy for San Jose-based community coalition Working Partnerships USA.

“It was a reminder of how organizing works and matters,” said nonprofit Silicon Valley Rising director Maria Noel Fernandez. “Now, it really does feel like a partnership.”

The successful partnership comes as tech giants like Google, Facebook and Amazon seek to expand their real estate footprint around the country while residents complain of displacement. It comes two years after Amazon famously abandoned plans to build a campus in New York after communities opposed it. It also comes as labor groups and employees are growing more vocal about the influence big tech companies exercise. Some local organizers said their success with Google is paving a path for future organizing with tech.

But it took four years to get there.

Loud opposition and a rocky start

Google had a long history of dealing with city government and the community near its headquarters in Mountain View, 10 miles up the road from San Jose. But the company had no history of investments in San Jose itself, even though many of its workers live there.

The process started off on the wrong foot, community members said.

It began when the campus plan appeared cloaked in secrecy at a time just as the conversation around tech power and antitrust was beginning to gain traction in the broader world. To the local community, it appeared that Google and the city were secretly plotting to give the company public land without much discussion with the community.

In 2017, the public found out that the city of San Jose had entered exclusive talks with Google, which intended to buy all the parcels in a roughly 240-acre area. In 2018, local media reports uncovered non-disclosure agreements between public officials and Google. Buchanan’s organization Working Partnerships USA sued the city, alleging it was conducting backroom deals with the tech giant.

“One of our initial concerns was with the NDAs,” Fernandez said.

“The NDA was just such a bad look for the project,” agreed Bob Staedler, who is a principal at Silicon Valley Synergy, a San Jose-based land use and development consulting firm. “So, it just started off badly.”

Another big concern was displacement, which the city had seen as tech employees from Apple, Google and others moved in over the years. Within one week of the news breaking that Google was coming to town and taking most of downtown with it, home prices in a three-mile radius of the site jumped 7%, — and rose from there in the following months, experts told CNBC at the time.

Community groups protested at every Google and city event in sight. At a particularly contentious city council meeting, several protesters chained themselves to the chairs. Protesters also made scenes outside of Google’s marketing conference in San Jose, and teamed up with employees and investors for a protest outside of the company’s 2019 shareholder meeting, where picketers held signs reading “Welcome to Googleville,” and “Hey Google, Don’t evict me.”

Fernandez led most of them, speaking into a megaphone.

“Since Google went into exclusive negotiations agreement, I’ve had two kids since.” Fernandez said. “But it almost feels like Google’s been my third.”

After such displays, the company announced a $1 billion housing pledge to build 20,000 Bay Area homes over the next decade but residents still held off on their excitement, fearing the company was throwing money at the problem without providing details or plans of how exactly it would be spent. Shortly after Google’s announcement, U.S. Senator Diane Feinstein, D-Calif., sent CEO Sundar Pichai a letter requesting more details.

At the time, Google told CNBC it had heard criticism around the timing of the announcement, but that it also recognized that Bay Area housing had reached a crisis point.

Fernandez’ organization called Google’s housing investment a “win” but added there was much more work to be done.

Google kept scooping up land around the region and adding to the frustration from labor organizations seeking answers. “We wanted to make sure they weren’t just throwing money at the problem,” Buchanan said.

Fernandez said at that point, local organizers had a clear message for Google: “Swim upstream or build something together.”

In 2019, Google put together a diverse cohort of community liaisons to talk with local residents, listen to their concerns and highlight their stories. Community members said these open-door conversations eventually led to them having a seat at the table when it came to decisions.

That cohort consisted of newly hired folks, several women and people of color who had held roles ranging public affairs to real estate.

One was Ricard Benavidez, who is responsible for the “design, programs and partnerships that are essential for inclusive real estate development,” according to his LinkedIn page.

Another, Javier Gonzáles, was a San Jose native who often connected to residents about their shared love and concerns for the region’s blue collar workers, arts and culture.

“I think it was just the times where they made themselves available to have a coffee or an off the record chat with organizations,” Bob Staedler said. “Instead of Google being a monolith, you really needed a human.”

These liaisons became trusted members of the community who listened to concerns and followed up, residents said.

“They put together a team of folks who were really interested in working more closely as a community — as partners,” said Buchanan. “As the team came together, you saw the relationship with Silicon Valley coalitions, the complexion of the conversation changed over time.”

By the end of 2019, local community members started to see a shift.

One key hire was Google’s district lead for San Jose, Alexa Arena, who joined the company 2019. She previously worked for real estate company LendLease, which partnered with Google on its Bay Area housing plans, and she had experience with contentious real estate plans. Adding Arena showed community members that the company was sending somebody with real decision-making power to listen to them.

They say Arena’s presence was unassuming and calm, and she displayed awareness that she was entering an established and historic community — a departure from Google’s entrance in 2017, when the company and city officials kept referring to the project as a “game-changer” for the city.

“It’s really different than what we see in projects of a normal scale,” Arena told a large group of San Jose residents at an early public feedback session in 2019. “In this case, it’s Google that’s the end user.”

She thanked the people for their time and for allowing the company to be builders in an already historic city, but she didn’t do so in a pandering way, community members said.

“We’re here for the long haul,” read her first slide at the 2019 community presentation.

In Apps and WebCybersecuritySmartphones
on 15 August 20212 min read

“For the first time ever we saw that real intentional process,” Buchanan said. “For all of us, it felt pretty different.”

Residents tested her authenticity and expertise. If Arena didn’t know the answer, she wouldn’t pretend to, but would repeat the question back to make sure she understood it, then consult others at the company or external partners. She followed up on items of concern, such as how the placement of a six-story building near an existing neighborhood would work.

Many organizers said the diverse makeup of the Google team helped them relate better to minority members of the community.

“She has a different set of skills that a white guy would not have,” Staedler said about Arena. “There’s media training and there’s just a natural way where Alexa, especially, wasn’t trying to sell you something.”

By 2020, Google began to understand residents needed more transparency and wouldn’t settle for a partial view of the plans. As a result, the company made a series of updates to its plans, including a community-based governance committee for certain funds.

The company also hired a local agency to design a website, which displays updates, timelines, expectations and other details of the campus plans. The website displayed residents’ key concerns such as “Keeping an authentic non-corporate character ” and “losing mom + pop shops.” It also began an email list, where it would send periodic updates on the campus with the option for readers to send feedback on the plan.

By 2021, the company had conducted more than 100 listening sessions, and its plans were beginning to sihft. It updated renderings of the space to reflect a warm, inviting open space where workers, residents kids and artists could walk among each other, eat together or shop together. That was a stark contrast to the first renderings, which displayed cold, basic high-rise buildings overlooking the rest of the region while young, hip tech workers walked around.

“Thousands of conversations helped us hone in to what we really want in a site, which was much less the corporate campus and the financial district and much more a resilient neighborhood,” said Alexa Arena, Google’s district lead for San Jose in a Oct. 2020 video.

It’s “the opposite of a traditional corporate campus,” lead urban designer Laura Crescimano said at the time.

The biggest win for community organizers is gaining decision-making power over how community dollars are designated and disbursed. The final agreement included the establishment of a 13-member advisory committee that must include five members with lived experiences from the community.

“The decision power isn’t going to sit in city hall or elected politicians but with the community and be intentional about the power imbalances for those who experience them,” Buchanan said.

“To be able to have real power in decision-making at this level is something we haven’t really seen before,” Fenandez said.

A project labor agreement ensures apprenticeship on the job and fair wages for construction workers to make sure “non-Google workers benefit too.”

Buchanan said since the approval, organizations like Amazon and Major League Baseball’s Oakland Athletics have reach out for advice on how they can connect with neighboring communities given the success of the Google partnership.

“I think it’s really representative of how community can come together around some complex projects and make sure it works for all residents and businesses of San Jose,” South Bay Labor Council CEO Jean Cohen told a local television show. “Google’s not a union employer but Google’s been a really good partner in figuring out how to make this project work for as many union members as possible.”

While some critics still remain, organizers say the project has created a positive pathway for future organizing on real estate projects and more. Cohen added that she thinks the conversations have gone so well that she sees it continuing after the project finalization.

“Once the project is complete, there’s been conversations with Google about how to make sure unions can organize,” Cohen said. “So I believe there’s a lot of dialogue that’s positive so eventually those companies do decide they may want to be union companies.”