How Google’s Smart Canvas fits into the workflow tools landscape 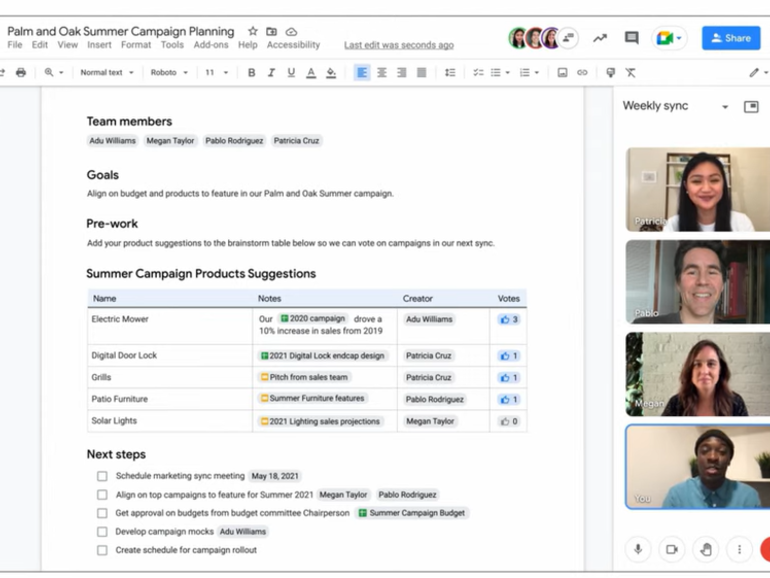 Google Workspace’s Smart Canvas is the feature that Microsoft wanted to build for at least a decade. The company that made Microsoft Office the dominant set of document creation tools long sought to turn it into a workflow hub. Its most successful effort was SharePoint, itself a response to the original groupware phenomenon: Lotus Notes. But that represented more of an integration among peer apps. In contrast, the rise of Slack, into which Google documents started seamlessly slipping, showed that a real-time chat environment could serve as a more flexible hub. With Teams, Microsoft soon had its own hub, and it was off to the races versus Slack, which was purchased by Salesforce at the end of last year.

In contrast, Smart Canvas is more of a layer than a destination like Slack or Teams. As I noted in my first column on the new feature, Smart Canvas feels like a natural outgrowth of the prolific in-app commenting that became a signature (and sometimes insufferable) feature of what has evolved into Workspace. Its suite-centric approach promises a more fluid transition between content and context than Teams’ or Slack’s repository-centric approach. In doing so, it changes the landscape of what has become a loosely defined set of workflow-enhancing apps that straddle project management and “living document” creation.

The main advantage that the project managers have over Smart Canvas is that, like Teams and Slack, they can be used to facilitate collaboration across any creation app or set of apps, even if those apps don’t have a direct link into them. While Smart Canvas will embrace extensibility among content tools, it remains to be seen if Google will allow other content sources to invoke it. In fact, it’s not clear how Smart Canvas will work in a mobile, app-driven environment but, if Slack and Teams can make it work, so can Google.

In contrast to the project management apps, “living document” apps such as Notion and Coda reimagine document authoring, turning blank sheets into landscape of components that include text, outlines, tables, and some of the many digital tidbits they can integrate. Smart Canvas’ components aren’t embedded into the context of the document the way they are in these tools, which initially present themselves as word processors so as not to intimidate newcomers.

But Coda in particular — with its 20-part, 80-minute video series for mastering the app’s “essentials” (with progress tracked by Coda itself) — has a level of functionality that seems far beyond Smart Canvas’ target. Indeed, Coda has taken extensibility to such an extreme that it has positioned itself as a low-code development environment; the product’s tagline is “a doc as powerful as an app.” That includes “doc-apps” reformatting themselves for mobile when using the Coda mobile app. Google says that it considers Smart Canvas a no-code environment. But that feels more aspirational, particularly as Google already has its own np-code development product in AppSheet.

As Google will roll out Smart Canvas to both free and paid Workspace users, its user base will soon quickly overshadow those of Coda and Notion. Nonetheless, they retain advantages over Google’s approach, which embraces their “content-out” design more than “content-in” products like the project managers or chat-driven hubs pioneered by Slack. As for Microsoft, it is clearly all-in on Teams, but that doesn’t mean it couldn’t flip at least some of Teams’ functionality to contextualize Office documents while leaving the main Teams app as a repository for everything else.

In Apps and WebCompaniesTech
on 16 November 20202 min read

For Microsoft, Teams has become the room where it happens
The Slack competitor has morphed into a nexus for a wide swath of the company’s technologies.