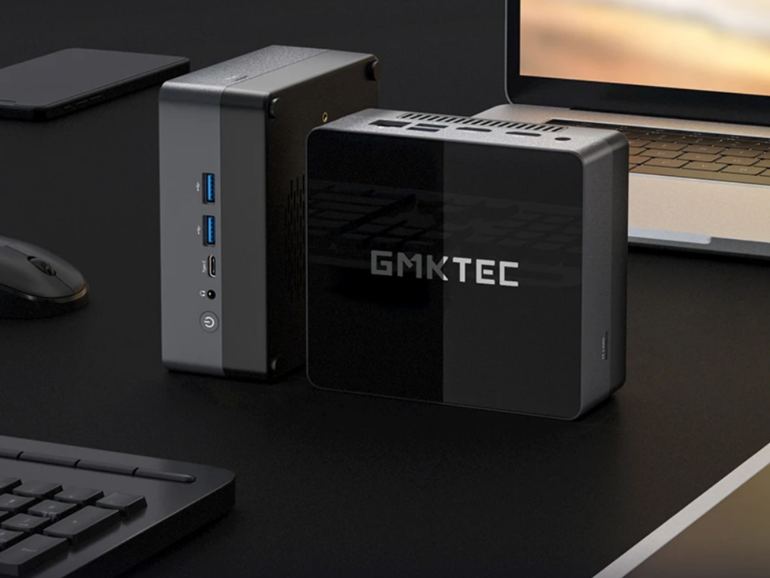 The GMK NucBox2 mini PC has had a significant feature upgrade from the NucBox I looked at earlier this month.

The first thing I noticed is that the NucBox2 has ports on both the front and rear of the mini PC. At the rear, there is a power jack, two HDMI ports, two USB ports, and an Ethernet port.

On the front, in addition to the power switch, there are two USB Type-A ports, a USB Type-C, and a 3.5mm headphone jack. On its right-hand side, there is a TF card slot. Sadly, there is no carry case included in the box.

Inside, the NucBox2 there is an Intel Coffee Lake i5-8259U 8th generation core i5 processor running at 2.3GHz up to 3.8GHz frequency. Its graphics card is an Intel Iris Plus 655 with 6MB of cache.

There is a 256GB solid-state drive that allows expansion up to 1TB, or if you use a SATA HDD, you can expand up to 2TB

The NucBox has 8GB of DDR4 RAM, expandable up to 32GB. It is pre-installed with Windows 10 Home build 19041.804. But it also supports Linux and Ubuntu installs.

At 19dB the fan is much quieter in use than the NucBox and does not often trigger. I stood the NucBox 2 on its side to make sure it had enough ventilation as the fan grille is underneath the NucBox.

The two HDMI ports will connect to two screens at 4K resolution and the NucBox2 has the usual Wi-Fi and Bluetooth stacks if you do not want to physically connect to your mouse or keyboard.

Even heavy load apps seem to work together with no issue. I configured a wireless keyboard, Bluetooth mouse, and touchscreen monitor to minimize the cables tying me to the NucBox2, which was another bugbear of mine with the previous version.

Even though the NucBox2 is larger and heavier than the NucBox, I found it less cumbersome in use — probably due to the port slots on the front of the device.

The NucBox2 currently has a $60 on-page coupon on Amazon, reducing it to under $440. Alternatively, buy it from GMK itself with code Easter60OFF and get free shipping and receive a NucBox carry bag.

GMK told me that all eligible purchases from GMK itself will be shipped from its US warehouse. Another offer for ZDNet readers, for the first 21 units, use the code: ZDNetKB2-120$OFF to get $120 off.

All in all, the GMK NucBox2 is a superb mini PC with a host of potential use cases at home or work. Use it to download box sets to watch offline (it’s really portable), as an image storage system, or to give extra oomph to your favorite games.