QAnon and anti-vaxxers brainwashed kids stuck at home during pandemic 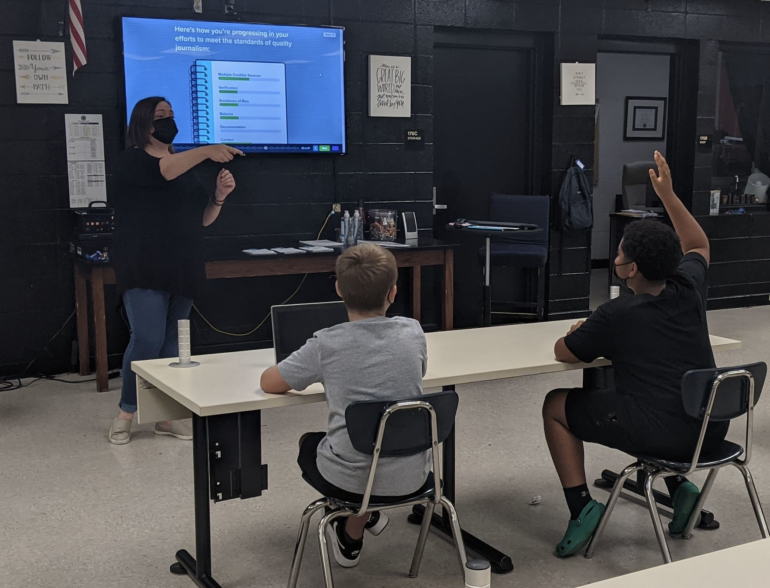 When Sarah Wildes, a seventh grade teacher in Alabama, was asked by a student about the mass confusion surrounding the results of the 2020 U.S. presidential election, she knew she had a big job in front of her.

“I have to tread lightly, but I pointed out that we do know,” said Wildes, a science and technology teacher at Sparkman Middle School in the small town of Toney. “There are facts. There have been committees who reviewed the election. The numbers show us a truth, but the social media bubbles confuse us about that truth.”

Wildes and teachers across the country face a vexing and evolving challenge as the new school year begins and students return to the classroom following a roughly 18-month hiatus from normal in-person learning. Since the last time full classrooms congregated, a whole industry of misinformation has exploded online, spreading conspiracy theories on everything from the alleged steal of the presidential election, which Joe Biden won, to the prevalence of microchips in Covid-19 vaccines.

It’s bad enough that kids are exposed to dangerous untruths across their favorite social media apps like Facebook, YouTube and TikTok. An equally large problem is that, while stuck at home during the pandemic, many students had their days of virtual schooling interrupted by screaming parents, who themselves had fallen deep into the internet’s darkest rabbit holes.

Some 15 percent of Americans believe QAnon conspiracy theories, according to a May report from non-profit groups Public Religion Research Institute and Interfaith Youth Core. QAnon believers were largely responsible for spreading “stop the steal” content on social media, backing the lie that former president Donald Trump won the election.

Meanwhile, 22% of Americans self-identify as anti-vaxxers, according to an academic study published in May, even as scientists and public health officials agree on the extreme efficacy and importance of Covid-19 vaccines.

For kids who have yet to fully develop critical thinking skills, basic truths are being distorted by the combination of misinformation on social media and a growing population of duped and radicalized parents.

“They were at home consuming this information without really being able to bust out of their own bubble having been in quarantine,” Wildes said. “They were starved for guidance on how to navigate all the things that they were seeing.”

In addition to dealing with the standard curriculum and trying to make up for lost classroom time, Wildes is taking on the responsibility of helping students filter out misinformation and find reliable news outlets. She’s leaning on the News Literacy Project (NLP), a non-profit in Washington, D.C., that last year developed Checkology, an online tool for educators to help students spot and dispel misinformation.

Checkology teaches students about the various types of misinformation they may encounter, the role the press plays in democracy, understanding bias in the news and recognizing how people fall into conspiracies. Since its launch in May 2016, Checkology has registered more than 1.3 million students and nearly 36,300 teachers.

“The pandemic, the election, social justice issues — people are looking for information, and educators need support to navigate that disinformation out there,” said Shaelynn Farnsworth, NLP’s director of educator network expansion.

Other online communities are giving the children of conspiracy theorists ways to connect and share their experiences. And also to detox.

Mobius, a 17-year-old who lives on the West Coast, said his mom is an anti-vaxxer who has started down the path of QAnon. Mobius, who asked us not to use his real name to preserve his family relationships, said his mom talks about the coronavirus as biological warfare and thinks the government is trying to profit from vaccines. He said 90% of her information comes from Facebook or TikTok.

In July, most of Mobius’s family was infected with Covid-19 after his mother contracted the virus and didn’t enter quarantine. She even traveled by plane while she was sick, said Mobius, adding that he was the only one in the family to get vaccinated and to avoid infection.

He said his mom wouldn’t let his siblings get the vaccine and that he missed several childhood immunizations growing up.

Mobius posted about his experience in QAnonCasualties, a Reddit group that says it offers “support, resources and a place to vent” for people who have friends or loved ones “taken in by QAnon.” The group was created in July 2019 and has 186,000 members. It’s flooded with stories that resemble Mobius’ experience.

One user post last month was from a university student recounting the anxiety she felt after her dad showed her a video that claimed Covid vaccines would make her infertile. A more recent post came from a 16-year-old girl, who claims she recently “escaped” her abusive QAnon parents and doesn’t know whether to get the Covid vaccination.

“I don’t know what’s real or not anymore,” she wrote on the Reddit board. “I’m terrified and confused. My parents told me I’d get blood clots, I’d die, be dead within five years, be sterile, microchipped, tracked by the government, controlled by the government etc.”

QAnon is a far-right conspiracy theory movement that emerged after the 2016 election. Though the messaging is disjointed, members often claim the world is controlled by a cabal of Satanic and cannibalistic elites who conspired against former President Trump.

Mobius, who just entered college and needed the vaccination to attend, said he began to question his family’s views around the time Trump entered office. He got more proactive in seeking the facts, turning to news sources rather than listening to his mom. He landed on the Associated Press and BBC as his most trusted outlets.

Still, Mobius said he tries to avoid talking about anything remotely political with his mom’s side of the family. He said his mom has gotten better about spouting conspiracies since getting sick, though her beliefs haven’t changed.

On QAnonCasualties, divorcees mourn the loss of decades-long relationships, workers talk about leaving their jobs because of a supervisor’s anti-vaccine rants and teens and young adults desperately vent about their parents.

Another member of the Reddit group, who asked to be called Vulture, posted on the board in early August, looking for support and advice on dealing with her mom.

Vulture, who’s 18 and was only comfortable going by a pseudonym, described her mom as an anti-vaxxer who began diving into the QAnon conspiracy in early 2020, at the start of the pandemic.

She said her mom believes 5G cell phone towers are harmful (one QAnon theory says that 5G causes the coronavirus), and she doesn’t allow her children to have WiFi on at night because she’s concerned about radiation. Vulture said her mom gets her information from Facebook, YouTube, Telegram and even in-person groups.

Vulture’s parents divorced and her mom is now married to another woman. Her mom’s wife got vaccinated earlier this year, creating a riff in the relationship because Vulture’s mom was afraid she had “vaccine toxicity” and told her wife she no longer loved her unconditionally.

Vulture said her mom has also threatened to kick her and her younger sibling out of the house if they get vaccinated, a threat that weighs heavily on her, especially as she prepares for her freshman year in college.

While teenagers like Mobius and Vulture are finding like-minded people online, groups such as Polarization and Extremism Research Innovation Lab (PERIL) and the Southern Poverty Law Center (SPLC) are trying to protect kids from falling victim to hoaxes and disinformation.

Last year PERIL and SPLC published “A Parents & Caregivers Guide to Online Youth Radicalization,” to help adults deal with teenagers who are at risk of exposure to extremism and conspiracy theories.

“Radicalization is a problem for our entire society, from the innocent people it victimizes to the family bonds it breaks apart,” the guide says. It includes sections on how to recognize warning signs, understanding what drives people toward extremism and how caregivers can engage with at-risk youth.

PERIL and the SPLC also created supplements to the guide for educators, counselors and coaches and mentors.

Wildes, the Alabama school teacher, sees a bigger role for the classroom and technology like Checkology in combating the spread of misinformation.

“Once people start going down the rabbit hole, it’s hard to get them out,” she said.

Checkology isn’t dogmatic in its approach, Wildes said. Through interactive lessons, the program is designed to give kids the tools to figure out what’s a hoax and what’s a fact supported by evidence. NLP also puts together a weekly newsletter, The Sift, which is intended to help educators teach students news literacy and to understand why a hoax or conspiracy theory that’s spreading is inaccurate.

Wildes said, based on the behavior she witnesses, that she thinks many middle school kids today are better equipped than adults to reject misinformation.

“I think they really enjoy being spoken to in a way that makes them responsible for their own thoughts,” she said.