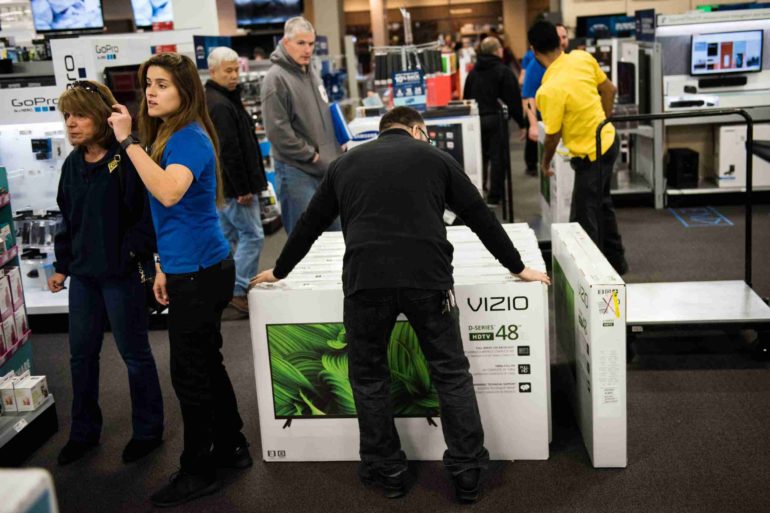 Vizio emerged as a top-selling TV company in the U.S. about 15 years ago by securing deals with big box stores like Costco and Best Buy and selling high-definition TVs at cut-rate prices.

The company now sells over 7 million TVs a year and generates close to $2 billion in revenue from those devices.

But that’s not the story Vizio is selling to investors as it prepares to go public on the New York Stock Exchange next week.

“One of the primary addressable markets that we’re focused on for our future growth is, of course, television adverting,” said Vizio CFO Adam Townsend in the company’s online roadshow promoting its IPO. “The shift in viewers from linear to ad-supported streaming is significant and we know the ad dollars will follow viewers more and more.”

While Vizio competes with Samsung, Sony, LG and TCL in getting its big screens into American households, the competition that matters most is now from streaming providers Roku, Amazon and Google. Almost all of the growth in the TV industry is in subscription services like Netflix, Amazon Prime Video and Disney Plus, and from advertisers who want to reach the millions of people switching to over-the-top viewing from traditional cable.

Vizio needs people to buy its TVs, even at a small profit margin, so it can make real money through its homegrown operating system, SmartCast. Like Roku, Amazon Fire TV and Google TV, SmartCast provides access to most major streaming services (though not HBO Max) along with a host of free and paid channels.

Vizio generates revenue from advertising on its home screen and within some free content, and it gets a cut of subscription sales to Netflix and other services when people sign up on their SmartCast TVs. SmartCast accounts jumped 61% last year to 12.2 million.

Paul Erickson, an analyst at research firm Parks Associates, said Vizio’s biggest advantage in trying to lure advertisers is that it’s a popular brand with a big footprint in retail and a major in presence in American homes. In a market that Samsung dominates by units sold, Vizio is consistently a top three vendor.

“If you’re trying to reach a TV manufacturer that reaches a lot of the market in the U.S., certainly they are very present,” he said.

The growth is in streaming

Vizio was founded in Los Angeles 19 years ago by William Wang, a Taiwanese immigrant who famously survived the crash of Singapore Airlines Flight 006 in 2000. By 2007, Wang had turned Vizio into the top-selling flat-panel TV maker. In a video for potential IPO investors, Wang said he was selling Vizio’s first plasma TVs at Costco for under $2,000 when rival products were running at over $10,000.

In 2016, Vizio introduced SmartCast to run its popular TVs with its own software.

“Many brands are out there fighting for the limited space at retail,” Wang said in the video. “To stay competitive, we knew we needed to find a way to gain recurring revenue from the deployed TVs, which would enable us to keep the costs of TVs low for our retailers and consumers.”

Vizio took its first shot of going public in 2015, when it was actually bigger by revenue than it is today due to higher TV prices. The company pulled its IPO in 2016 after China’s LeEco offered to buy it for $2 billion. The deal fell apart the following year because of regulatory complexities, and in 2018 Vizio sold stakes to Taiwanese manufacturing partners Foxconn and Innolux.

A quick glance at Vizio’s financials makes it readily apparent why the company’s future hinges on streaming.

Device revenue in 2020 rose 7% to $1.9 billion, but remains below the total from 2010. That’s because the price of TVs has been dropping every year, offsetting increased shipments. Meanwhile, Vizio’s streaming business, or what it calls “Platform+,” saw growth of 133% last year to $147.2 million.

While the platform business accounted for just 7.2% of total sales, it generated 38% of Vizio’s gross profit, enabling the company to quadruple its net income for the year.

Chief Revenue Officer Michael O’Donnell said in the investor presentation that the company launched its ads direct sales team a little over a year ago. Brands including Campbell Soup, Guinness, Fitbit, AT&T and Progressive are spending money to reach SmartCast users in a targeted way, similar to how they find relevant audiences online.

Vizio is also making its debut at top ad industry events. In May, the company is participating in the Interactive Advertising Bureau’s NewFronts, where online publishers and platforms show off their programming, audience data and tools to media buyers. Amazon, Snap, Twitter and Google’s YouTube will also be there.

Investors will need a lot of convincing if they’re to ever value Vizio as something other than a consumer hardware vendor. In its updated prospectus on Tuesday, Vizio said it expects to sell shares in its IPO at $21 to $23 piece, which would value the company at $4.2 billion at the top of the range.

At about 2.1 times 2021 revenue, that would make Vizio trade closer to old stodgy hardware companies like Samsung and Sony than it would to Roku, which currently commands a price-to-sales multiple of 26. The particular challenge for Vizio is that it needs consumers to first choose to buy its TVs and then opt to use its operating system rather than plugging in a Roku, Google or Amazon device.

“To the extent consumers who purchase a Vizio Smart TV do not engage with our SmartCast operating system and instead use their Smart TV with one of our competitors’ solutions or for other purposes, our ability to generate Platform+ net revenue may be harmed,” the company acknowledges in its prospectus.

Voice is the future

Vizio’s streaming business remains in its early stages. One area where it’s investing is voice control to make it easier for consumers to navigate, buy things, and work with other smart home products. Between 2018 and 2019, Vizio’s SmartCast integrated with Amazon Alexa, as well as offerings from Google and Apple, “thus enabling our Smart TVs to work with all three major voice assistants.”

Vijay Balasubramaniyan is keeping close tabs on the development of voice controls in smart TVs. He’s the CEO of Pindrop, which develops security software for voice communications and partnered with TiVo earlier this year to power its voice controls after TiVo abandoned Alexa.

While he hasn’t had discussions with Vizio, Balasubramaniyan said the whole industry is experimenting with how to make voice not just a feature for turning on the TV and moving between apps and shows but a useful way for improving monetization.

“Between being able to provide better advertising to being able to do voice commerce on TV, those are two increasingly important areas that each of these Smart TV manufacturers are looking aggressively in,” Balasubramaniyan said.