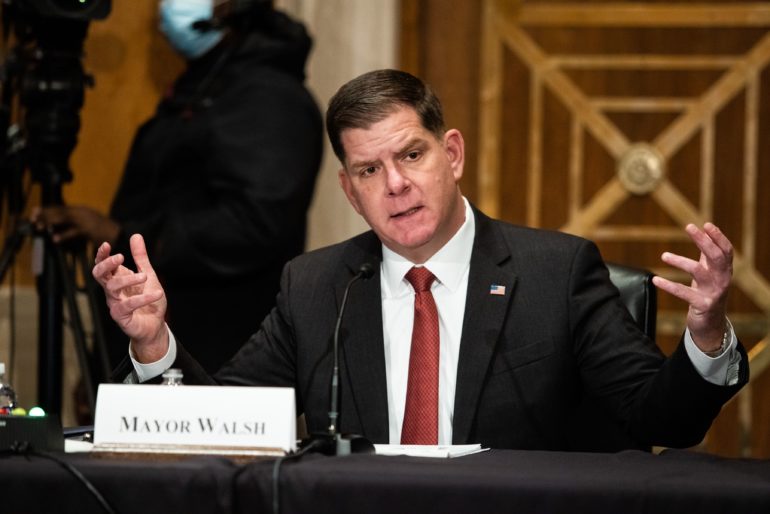 Shares of Lyft, Uber and DoorDash dropped sharply Thursday after Secretary of Labor Marty Walsh told Reuters in an interview that gig workers should be classified as company employees.

Uber shares lost more than 6%, while both Lyft and DoorDash dropped more than 10% in midday trading.

“We are looking at it but in a lot of cases gig workers should be classified as employees … in some cases they are treated respectfully and in some cases they are not and I think it has to be consistent across the board,” Walsh told Reuters. He said the department will be reaching out to companies that employ gig workers to make sure the workers have access to consistent wages, sick time and health care.

“These companies are making profits and revenue and I’m not (going to) begrudge anyone for that because that’s what we are about in America,” he added, “but we also want to make sure that success trickles down to the worker,” he added.

Walsh’s views could set the tone for how the administration plans to tackle the gig economy. Stark policy changes could upend the core business models of ride-hailing and food delivery apps, making it harder for them to reach profitability.

Classifying drivers as contractors allows the companies to avoid the costly benefits associated with employment, such as unemployment insurance.

The companies are already facing a patchwork of state and national regulations on the matter. Last year, Uber and Lyft successfully funded a voter proposition in California that overturned that state’s law classifying gig workers as full-time employees but lost a similar battle in the U.K.