What’s next for digital collectibles? 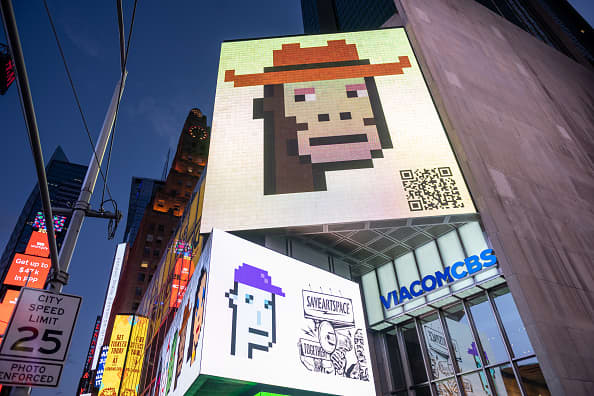 Has the NFT bubble already burst?

Non-fungible tokens took the art world by storm earlier this year. NFTs are a type of digital asset designed to show someone has ownership of a unique virtual item, such as online pictures and videos or even sports trading cards.

In March, South Carolina-based graphic designer Beeple, whose real name is Mike Winkelmann, sold an NFT for a record $69 million at a Christie’s auction. Jack Dorsey, CEO of Twitter, sold his first tweet as an NFT for $2.9 million later that month.

More recently, a rare digital avatar known as a CryptoPunk sold at Sotheby’s for over $11.7 million on Thursday. Total NFT sales reached an eye-watering $2 billion in the first quarter, according to data from Nonfungible, a website which tracks the market.

But new data shows the NFT hype is fading. Overall sales plunged from a seven-day peak of $176 million on May 9, to just $8.6 million on June 15, according to numbers from Nonfungible. That means volumes are now roughly back where they were at the start of 2021.

Meanwhile, prices of major NFTs appear to be sliding. CryptoPunks, one of the most popular NFT projects, fell from a weekly average of $99,720 in early May to $50,840 at the start of June. SuperRare digital art prices have fallen on average from a record of $31,778 to $5,342 in a similar timespan.

One of the main reasons for the sharp drop in the NFT market was a sudden rise and fall in sales of new crypto collectible items called MeeBits — made by the creators of CryptoPunks — according to Gauthier Zuppinger, chief operating officer of Nonfungible.

“The thing is that, each time you’ll notice such a quick increase on any trend, you’ll see a relative decrease, which basically stands for a market stabilization,” he told CNBC.

Geoff Osler, CEO and co-founder of NFT app S!NG, said the digital collectibles craze was likely driven by “pent-up demand” from wealth accumulated from rising cryptocurrency prices, and that the market now seems to be calming in tandem with a drop in crypto markets.

What’s next for NFTs?

Proponents of NFTs don’t see the recent slowdown as the end of the road for the market.

“High-profile NFTs selling for millions of dollars was a sure sign that the market was treating them as speculative assets,” Nadya Ivanova, chief operating officer of L’Atelier, a research firm affiliated with BNP Paribas, told CNBC.

“And by definition, markets for speculative assets are unstable and liable to dry up.”

“The bigger question for NFTs is their long-term value, which we believe is likely significant,” Ivanova added. “As augmented and virtual reality technology matures, normal people are going to spend more and more of their time — and therefore money — in virtual environments.”

It’s worth noting there’s been talk of augmented and virtual reality taking off in the tech industry for years, with companies from Facebook to Microsoft making big bets in the space. But the tech is yet to see mainstream adoption.

Still, some in the crypto space are betting NFTs could play a role in the development of immersive virtual worlds.

Another potential use of NFTs we may hear more about in the months ahead is music, according to S!NG’s Osler. Artists such as Kings of Leon and Steve Aoki, for example, have jumped into the NFT frenzy.

“We have only seen the tiniest part of where this is going,” Osler told CNBC. “Cryptocurrency is here to stay — and NFTs mean there is now something to buy. It’s the other side of the equation. And this is going to go a long way past digital art. We think music is next.”

The NFT phenomenon has some issues to resolve before it becomes a widespread method of proving ownership of art and other original content, though. Copyright is a big one. A number of artists and content creators have complained their work is being stolen and sold on as NFTs online.

Osler said it’s important that legal protections are added “directly into the NFTs themselves,” and that consumers “have legal recourse if something goes wrong.”

Zuppinger expects there will be “more and more promising projects in the next few months and years.”

“We are reached out every day by promising projects, large companies, banking groups all around the world that are gradually entering the NFT space, so we’re pretty confident that the NFT space is not ‘dead’,” he told CNBC.