Why is your identity trapped inside a social network? 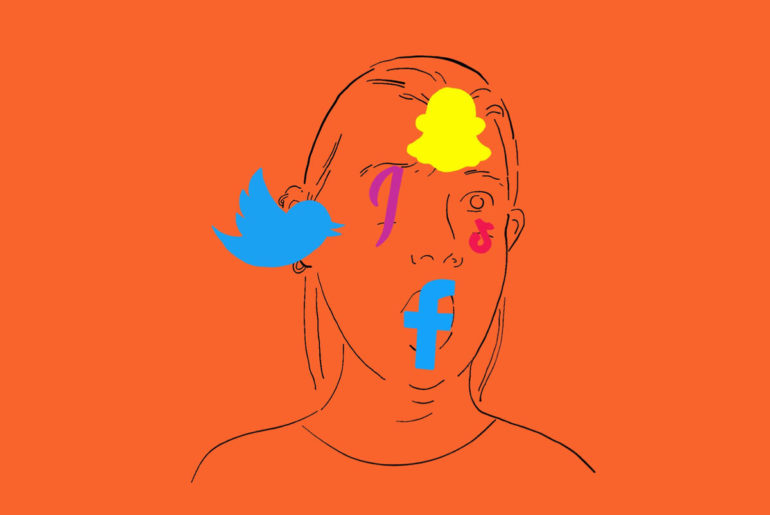 All of these forms of address are the result of what are called protocols. Protocols, the central achievement of the Internet, are an agreement about how things will be addressed so that everything can to be reached. They are protocols because they are not owned by anyone, they are agreed to by everyone who wants to participate, and they are universal.

The same is true for identities inside of Snap and Pinterest and Tik Tok and LinkedIn and everywhere else that people’s identities are formed. To the extent that interaction with others — and particularly individual control over those interactions — forms a core part of one’s identity, no one has an identity on the Internet except what is created inside those private social databases.

The stakes are high for identity, because Facebook, in particular, but others as well, view identity as the last frontier to replace the Internet with something of their own creation. On Facebook’s Q2 conference call last month, founder and CEO Mark Zuckerberg described what he coined the “metaverse,” a world that sounds like a replacement for the Internet:

So what is the metaverse? It’s a virtual environment where you can be present with people in digital spaces. And you can kind of think about this as an embodied Internet that you’re inside of rather than just looking at, and we believe that this is going to be the successor to the mobile Internet.

The defining quality of the metaverse is presence, which is this feeling that you’re really there with another person or in another place. Creation, avatars, and digital objects are going to be central to how we express ourselves. This is going to lead to entirely new experiences and economic opportunities.

Given the rather stark prospect of the metaverse as a single Internet controlled by one company, one wonders, Why should it be the case that the open arrangement of the Internet doesn’t extend to the one area of humans’ participation that is arguably most important to each individual, their identity?

And by extension, why doesn’t the Internet have a personal protocol to ensure connectivity between people just as it does between computers?

Also: Physics explains why there is no information on social media

“I totally missed the entire world of social networks,” said Leonard Kleinrock, one of the key inventors of the Internet, in a recent talk via Zoom to a small audience.

Kleinrock sent the first packets of data over the Internet from his laboratory at UCLA in 1969.

No one, said Kleinrock, in the early days expected anything like social, or even email, which got underway shortly after the first packets were sent, in 1972.

“Nobody saw email, nobody saw YouTube, nobody saw the Web, nobody saw peer-to-peer transfer, nobody saw blockchain,” said Kleinrock. “It came in a surprising way, and as soon as it hit, it became contagious, explosive, and very quickly almost dominated the network.”

As a consequence of that blind spot by Kleinrock and others, the network never developed what might have been a personal protocol. Kleinrock, looking back, regards the lack of built-in authentication of people as one of the failings of the Internet. The Internet, he said, should have built in both file authentication and “strong user authentication.” The latter would make sure that ‘If you’re talking to me, you’ve got to prove it’s you.”

For lack of a protocol, social media stepped in to fill the void.

Numerous effects have flowed from that role of social, including many pernicious ones.

One bad effect is that social media is an island that exists inside the Internet, a gatekeeper of interconnection. People cannot connect to one another unless they subscribe to a given service. The same presumption of universal connectivity between machines doesn’t exist between people.

A larger implication is privacy. Every user of a social network signs on to give vast control over personal information to social media, with potentially disastrous consequences, as seen in the Cambridge Analytica scandal. There is no lever by which an individual can negotiate with social media companies for what they would like as the treatment of their information — precisely because within a social network, a person’s information belongs not to them, but to the operator of that private database.

“When’s the last time Facebook asked you what privacy protocol you would like applied to you?” Kleinrock pointed out in his talk. “Industry is abusing its power right now.”

When individuals want to avoid mis-use of information, such as rampant cookie tracking, their only hope is that another large corporation, such as Apple, will start a fight with social media, and that the outcome may be to the user’s benefit.

The implications of that privacy wormhole stretch far beyond social media. The lack of a personal protocol means every new personal tech gadget is similarly appropriating your personal information without consent.

As Shoshana Zuboff writes in The Age of Surveillance Capitalism, Google’s Nest thermostat “comes with a ‘privacy policy,’ a ‘terms-of-service agreement, and an ‘end-user licensing agreement’,” each of which gather all kinds of personal information.

“Nest takes little responsibility for the security of the information it collects and none for how the other companies in its ecosystem will put those data to use.” With a personal protocol, it is conceivable users could be given some control in the form of deliberate consent to such terms.

A third implication of the lack of a personal protocol is the relative lack of competition in social networks. As seen by the collapse of Google’s Google+ effort, building a competitive social graph to vie with Facebook’s social graph is a losing proposition.

Never mind that Twitter is competition for Facebook, and so is Pinterest, and Snap and LinkedIn, etc., and all of them are competing for the same eyeballs. They may have different styles, but they don’t ensure diversity in social. The services all tend toward a certain sameness, a formula meant to shape behavior to sell advertising.

Collectively, there is little to no information on social media, and that is a direct consequence of the fact that social media doesn’t have enough competition in the absence of an open protocol.

Legislators and regulators have tried to draught legislation to undo the stanglehold of Facebook and the rest on social, but that’s unlikely to achieve much. A surer form of breaking the oligopoly would be to continue the unfinished business of the Internet.

A personal protocol, like every other protocol on the Internet, could allow for multiple different social graphs and interest graphs. Each one would each have to solicit the interest of users and bargain for their information. By definition, those users’ information would be portable, since it would belong to them, not to a database. That would allow movement between social networks, which could result in greater diversity and greater connectedness of individuals.

The question is whether anything can be done at this point in time, given the enormous momentum behind Facebook and the rest.

There have been efforts over the years to develop something like an open social media protocol. For example, the OpenSocial working group was active in the World Wide Web Consortium, the W3C, from 2014 to 2017 as an effort to develop a programming interface by which applications could move between different social networks, known as the Social Web.

The effort was ended in early 2018. The social networks that supported OpenSocial, moreover, went away or withered, including Google+ and MySpace. Remember Friendster?

Some work on a form of OpenSocial seems to have continued on an open-source effort called the Social Hub and the Fediverse. It appears to be in the hands of a very small group of devotees, with little momentum at present.

Newer efforts suggest the appetite is still there for alternatives. The W3C has a federated identity community group that claims it “will both support federated identity and prevent untransparent, uncontrollable tracking of users across the web.”

The W3C is also working on something called the Metaverse, which the organization describes as an effort to “bridge virtual worlds by designing and promoting protocols for identity, social graphs, inventory, and more.” It’s totally separate from Zuckerberg’s metaverse.

A third initiative is the portable personal data preferences effort, which seeks to “define a way for users to express preferences regarding the collection, use, and disclosure of their personal information.”

Kleinrock, in the same talk at the Collective[i] Forecast, laid out what a social protocol should like. It would have a heavy emphasis on the control by an individual of their own personal information:

It should be possible for you to articulate what privacy policy you want. You’d be able to say, in some simple language, not a thirty page document, I don’t want you to take my contact database, I don’t want you to track my behavior on the Web, I’ll allow you to do this and not that. And you get a simple graphical picture as to what you’re allowed. And then the industry group comes and says, this is the privacy policy I’m applying. If it fits, fine. If it doesn’t, you negotiate. If you can’t negotiate, you walk. What I’m asking for is a customized privacy policy for every user. And the industry says, what are you talking about, we can’t afford to have a unique privacy policy for every user. And I say, baloney, they already feed you adds which are perfectly customized to you.

It sounds simple, but there are major hurdles. One is what’s known as Metcalfe’s Law, coined by Bob Metcalfe, the inventor of Ethernet, and the University of Texas at Austin professor of innovation.

Metcalfe’s Law says that the value of a computer network increases as the square of the number of nodes that it can connect. Metcalfe was talking about nodes as computers, but think of nodes in the case of social media as being people. (In fact, Metcalfe has shown how his Law perfectly describes the exponential growth of social networking.)

With 1.91 billion daily users on Facebook, and hundreds of millions of people on all the other social networks, there is a built-in momentum that acts as intertia against a new protocol luring users away from the private databases. That momentum is what Metcalfe refers to as “network effects,” the centrifical force that keeps participants in a network from leaving.

No one has proven that network effects can not be undone or reversed. However, as Kleinrock said during his forum, there is the additional challenge that changing Internet infrastructure is harder now that the Internet has built into it certain usage patterns and infrastructure dependency.

“It’s really hard, when you have billions of people out there, to change a) their behavior; or b) the rules by which they operate or the protocols they use,” said Kleinrock. “The legacy system is huge.”

“In the early days of the Arpanet, we had a totally clean sheet. We had it very easy. Now it’s very difficult to make those changes.”

Again, the stakes are high. As Metcalfe pointed out during an appearance in another Collective[i] Forecast forum, “It’s my point of view that the most important new fact about the human condition is that we are now connected.”

“In fifty years, more than half the human race has gone onto the Internet,” said Metcalfe. “More of us need to focus on studying connectivity per se.”

As things stand, humans on the Internet don’t really exist in cyberspace as individuals. They exist as the creation of advertising machines to monetize a manufactured identity by monopolizing information. Humans exist as phantoms, daydreams of a computer program.