I sold my old iPad Pro to Backflip, and now I have cash for an M1 model 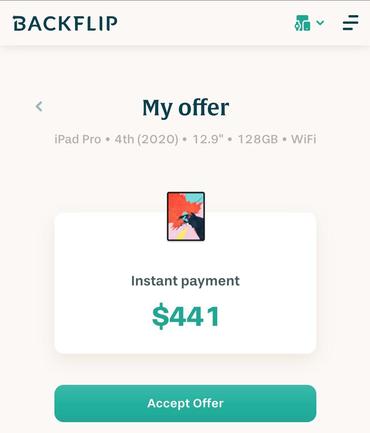 Several weeks ago, I was contacted by the PR representation for Backflip, a new service based out of Austin that allows you to painlessly sell your old consumer electronics for cash. I knew that an updated iPad Pro would make its appearance later on this month, so I thought it was a good idea to sell my existing model — a 2020 Wi-Fi version — while it was at the height of its trade-in value.

Online trade-for-cash or cash equivalent services aren’t new. Companies like Amazon, Apple, and Google have their own trade-in programs, and in the past, third parties like Gazelle have also offered cash trade-ins. There are also companies like Swappa that facilitate cash transactions between private individuals.

Gazelle has since stopped their trade-in business, and Amazon’s Trade-in site doesn’t have all the latest models listed necessarily and is really only a solution for Amazon credit. Swappa has been a successful service for many technology reviewers who I know have used it in the past, but there is a negotiation process involved. There are other cash trade-in businesses, but cash reimbursement can take over a week in many cases. The inspection process occurs offsite — raising the specter of devaluation of the item in question depending on the inspection criterion.

Backflip works differently. You choose the product you want to trade in on their website, and then you bring the device, unpackaged, to your local UPS store, or you can request a UPS courier come onsite to your home or business to pick up the device. If you choose to bring the device in, you are provided with a QR-code to show the UPS clerk, which prompts a special process at the store. There’s no cost to using the service; you drop the products off. Backflip accepts over 130 different types of devices, including iPhones, iPads, Macbooks, Kindles, Smartwatches, Samsung devices, Google Pixels, GoPros, gaming consoles, and audio devices.

Here is where the company’s unique value proposition comes into play: Backflip is a UPS Digital Connections and integrated logistics customer, the same way that large partners like Apple or Amazon are when products get returned or sent in for service. All device inspection and packaging occurs at UPS, using a system known as CAMS — so once it is in their hands, and you got the tracking receipt, you’re good to go, and payment typically occurs within 24 hours of delivery to Backflip. The device is also insured for the value you were quoted by Backflip, so if anything happens on the UPS side, such as loss or damage, you’re still getting paid for the full value of the product.

In my case, I chose to bring my iPad Pro 12.9 (128GB with Wi-Fi) to the UPS store. It looked the device over to make sure it wasn’t damaged, packaged it up, gave me a receipt and tracking slip, and sent me on my way. In addition to sending me confirmation of the trade with the QR code to show to UPS, Backflip sent me an email confirmation of the receipt of the product once it was entered in UPS’s system, when it received it at the inspection facility, and when payment was sent.

Hyundai Motor says it is in early talks with Apple

In CompaniesSmartphones
on 7 January 20211 min read

Payment can either be a direct bank transaction, or you can choose to have the payment done as an Amazon Gift Card. In my case, I chose the gift card because I use Amazon a lot.

Current pricing at Backflip appears to be more aggressive than Amazon, but less than that if you were to exchange your iPad with Apple during a trade-in process. However, in my case, I initiated the trade with Backflip several weeks ago before new models were announced and Apple updated its trade-in pricing, so my cash value was considerably higher than current pricing. I got $578 for my 2020 iPad Pro with Backflip — when Apple’s trade-in pricing was lower and only the 2020 models could be purchased using trade-in credit. Amazon did not have pricing for that model at its trade-In site. So it pays to sell your devices as early as possible before new models are announced.

In addition to UPS and courier service, if you live in the Austin area, the company will also roll out a concierge-type service where an employee comes to your home, then evaluates the equipment right then and there, and pays you immediately onsite. The company intends to do this on a national basis once their Austin concierge offering has been successful. The company has also pledged to refurbish and resell every device it receives — and, in the worst case, to sustainably recycle the device.