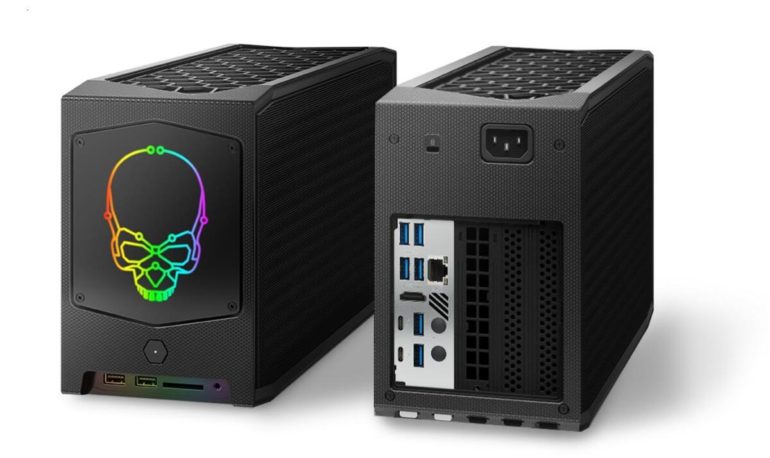 Intel’s Next Unit of Computing (NUC) platform has been around long enough that it’s probably lost its “next” status, but that doesn’t stop the company from continuing to churn out new versions as its Core processors get refreshed. With each new iteration of the NUC, we can expect an NUC Extreme version, designed for gamers and other high-performance PC users, housed in a compact case with a skull logo etched on it, and code-named with a scary-sounding Canyon-based moniker.

Following in the lineage of such predecessors as Skull Canyon, Hades Canyon and Ghost Canyon, the new Beast Canyon has just been released under the official name of NUC 11 Extreme Kit. As with its predecessors, the kit is based around the latest top-performing Intel Core processors housed in a small-form-factor chassis with room for a full-size graphics card, up to 64GB of RAM, and a number of storage options via a quartet of M.2 slots. The chassis is branded with the signature (removable) skull logo complete with RGB lighting to customize it to your taste. It features Intel’s Compute Element, which packages the CPU, motherboard and memory and storage slots into a single card-like unit that can be swapped out for a different version.

The Beast Canyon NUC is available in two configurations based on your eight-core Tiger Lake processor choice — either an unlocked Core i7-11700B or a Core i9-11900KB. (Note that both are 65W chips, so they won’t be as blazing as the beefier 125W full desktop versions.) While you supply the RAM, graphics and storage, the kit does come with a 650-watt power supply and a trio of 92mm fans to handle the components you add (up from the 80mm fans in the Ghost Canyon NUC). It also supplies a range of connectivity options, including a pair of Thunderbolt 4 ports, eight USB 3.1 ports, HDMI 2.0b port, and Wi-Fi 6E AX210 and Bluetooth 5.2 wireless antennas.

The top crypto exchanges you need to know

Beast Canyon also comes with a beast of a price tag, considering you’ll have to spend a hefty amount on the high-performance memory, GPU and storage this system demands. Intel’s starting price for the Core i7 version is $1,150 while the Core i9 edition will start at $1,350. If you want to find out if it’s worth the cost, check out our sister site CNET’s hands-on preview of the NUC 11 Extreme Kit.