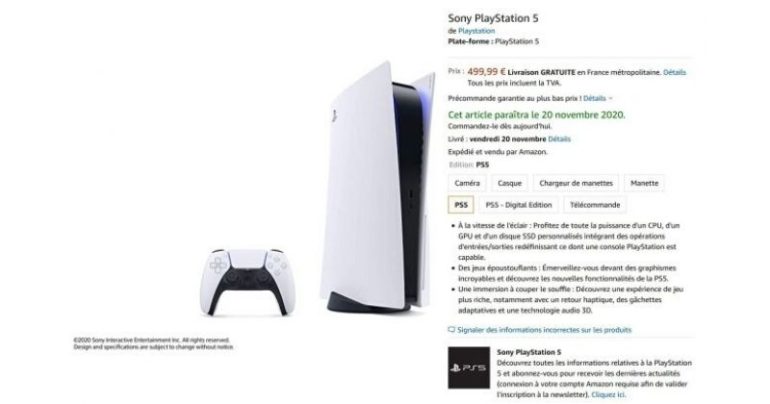 From the time PlayStation 5 is announced last week, PS5 is in the news. First, it was in the news because of its design, its UI and special editions. And now, once again PlayStation 5 has come in the news for its pricing details. As per the reports, the price of PS5 is leaked via Amazon listing.

An e-commerce website listing has a price and a release date of PlayStation 5. A well-known tipster has posted a tweet which says Amazon France has listed PS5 with its price tag. The price is EUR 499 ( around Rs.42,700), but soon the listing was removed. The tipster tool a screenshot of the price before it was taken down.

Ben Geskin shared a screenshot of the Amazon listing which shows the price of the PlayStation 5 which is yet not launched. You can see the tweet above which shows the console with a disk drive price will be EUR 499, and it will release on 20 November. Moreover, the Digital Edition of PS5 will cost EUR 399 (around Rs.34,200).

The listing of PlayStation 5 is taken down, so it shows “Currently unavailable.” As the news is not confirmed, the price and the release date should not be considered.

The launch of PlayStation 5 is set for “holiday 2020” which would be around late November or December. However, the leaked date is November 20 in Amazon listing, but we don’t know this news is true or not.

Last week, the design of the console PlayStation 5 was revealed.