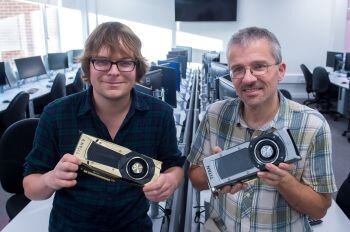 University of Sussex academics have established a method of turbocharging desktop PCs to give them the same capability as supercomputers worth tens of millions of pounds.

Dr. James Knight and Prof Thomas Nowotny from the University of Sussex’s School of Engineering and Informatics used the latest graphical processing units (GPUs) to give a single desktop PC the capacity to simulate brain models of almost unlimited size.

The researchers believe the innovation, detailed in Nature Computational Science, will make it possible for many more researchers around the world to carry out research on large-scale brain simulation, including the investigation of neurological disorders.

Currently, the cost of supercomputers is so prohibitive they are only affordable to very large institutions and government agencies and so are not accessible for large numbers of researchers.

As well as shaving tens of millions of pounds off the costs of a supercomputer, the simulations run on the desktop PC require approximately 10 times less energy bringing a significant sustainability benefit too.

Dr. Knight, Research Fellow in Computer Science at the University of Sussex, said: “I think the main benefit of our research is one of accessibility. Outside of these very large organizations, academics typically have to apply to get even limited time on a supercomputer for a particular scientific purpose. This is quite a high barrier for entry which is potentially holding back a lot of significant research.

“Our hope for our own research now is to apply these techniques to brain-inspired machine learning so that we can help solve problems that biological brains excel at but which are currently beyond simulations.

“As well as the advances we have demonstrated in procedural connectivity in the context of GPU hardware, we also believe that there is also potential for developing new types of neuromorphic hardware built from the ground up for procedural connectivity. Key components could be implemented directly in hardware which could lead to even more truly significant compute time improvements.”

The research builds on the pioneering work of US researcher Eugene Izhikevich who pioneered a similar method for large-scale brain simulation in 2006.

At the time, computers were too slow for the method to be widely applicable meaning simulating large-scale brain models has until now only been possible for a minority of researchers privileged to have access to supercomputer systems.

The researchers applied Izhikevich’s technique to a modern GPU, with approximately 2,000 times the computing power available 15 years ago, to create a cutting-edge model of a Macaque’s visual cortex (with 4.13 × 106 neurons and 24.2 × 109 synapses) which previously could only be simulated on a supercomputer.

The researchers’ GPU-accelerated spiking neural network simulator uses the large amount of computational power available on a GPU to ‘procedurally’ generate connectivity and synaptic weights ‘on the go’ as spikes are triggered—removing the need to store connectivity data in memory.

Initialization of the researchers’ model took six minutes and simulation of each biological second took 7.7 min in the ground state and 8.4 min in the resting state– up to 35 % less time than a previous supercomputer simulation. In 2018, one rack of an IBM Blue Gene/Q supercomputer initialization of the model took around five minutes and simulating one second of biological time took approximately 12 minutes.

Prof Nowotny, Professor of Informatics at the University of Sussex, said: “Large-scale simulations of spiking neural network models are an important tool for improving our understanding of the dynamics and ultimately the function of brains. However, even small mammals such as mice have on the order of 1 × 1012 synaptic connections meaning that simulations require several terabytes of data—an unrealistic memory requirement for a single desktop machine.

Start training to become a certified AWS DevOps engineer for $40

“This research is a game-changer for computational neuroscience and AI researchers who can now simulate brain circuits on their local workstations, but it also allows people outside academia to turn their gaming PC into a supercomputer and run large neural networks.”

Provided by
University of Sussex