Retailers Screwed Everyone on PlayStation 5 Preorders 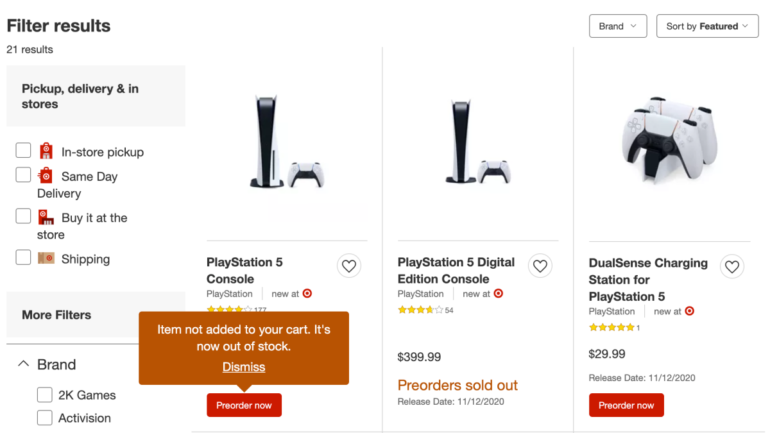 Yesterday, we finally got the skinny on the PlayStation 5’s launch date, price, and what we thought was the preorder date. Then retailers everywhere jumped the gun, confusion was rampant, and now you’ve got a bunch of pissed off gamers asking Sony, what in the actual hell?

After yesterday’s PS5 event, Sony tweeted that PS5 preorders would be available “starting as early as tomorrow at select retailers.” Tomorrow, at that time, meaning today, Sept. 17. Except it would appear that retailers did not get the memo, per the Verge. Walmart tweeted at 6:53pm yesterday that it wasn’t waiting. “Make you wait to get the new #PlayStation5? Nah, that’s not like us,” reads Walmart’s tweet. “Go on, preorder it NOW!” GameStop also issued a press release yesterday night announcing it was taking preorders early. If you weren’t a Twitter-saavy gamer, there’s a good chance you woke up this morning completely and utterly screwed.

This Is the PS5

While Microsoft has already shared a number of details about the Xbox Series X, Sony has taken a…

Preorder pages on Target, Amazon, BestBuy, GameStop, and Walmart were in fact, borked or “sold out” when Gizmodo checked this morning. On Sony’s page, you’re still only greeted with that prompt to “register for an opportunity to be one of the first to pre-order” the PS5. Whether those promised emails went out, who can say? (If you signed up let us know.) However, if the r/PS5 subreddit is any indication, it’s not likely they did. Several redditors commented that they’d went to bed just before retailers went rogue with their preorders, meaning they woke up well-rested but shit out of luck.

Unsurprisingly, if you search “Playstation 5″ on eBay you can already find over 21,ooo results for confirmed PS5 preorders at predatory markups—some for over $1,000. That’s over double the starting retail price. For a preorder.

While it’s annoying that retailers jumped the gun, likely to bump up sales and hype, do not, I repeat, do not flip out just yet. Has this been handled this terribly? Yes. Have retailers screwed many gamers out of a chance to preorder? Double yes. However, there’s also conflicting information right now as to whether this preorder bonanza will actually be anything more than an artificial hype machine.

In an interview with the Washington Post, PlayStation CEO Jim Ryan explicitly stated that Sony will have more PS5 units ready for sale at launch than when they had PlayStation 4 units in 2013. Furthermore, the Verge reports that Walmart has already reportedly said more stock should be coming Sept. 22. Target’s site also says to “Check back on release date.”

It’s possible that with gaming at an all-time high due to the pandemic, that even Sony’s increased PS5 production may not be enough. After all, Nintendo is still struggling to keep up with demand for its Switch console even after six months. That said, Sony’s Ryan sounded awfully confident in his remarks to the Washington Post. “For quite some time, in the early part of covid, that picture was far from clear,” Ryan said in the interview, commenting on Sony’s decision to amp up PS5 production early on in the pandemic. “Just as the supply things was unclear, would there be any market? Would anyone be allowed to go outside? Would any shops be open? this has been a year like no other. But all of that just reinforced our resolve, and the path we determined at the start of the year was absolutely the right one.”

Time will tell, but there’s also zero harm in not having the PS5 right at launch. You could just… wait. That might be blasphemy to some, but considering the world is on fire, video games aren’t going anywhere and neither is the PS5.

After publication, a Gizmodo reader who had registered for Sony’s preorders shared the official email text. It would appear registered preorders begin 10 am PT on Friday, Sept. 18 and require specific URLs linked to your PSN ID. You can read the full text below.

We’re pleased to extend this opportunity to be one of the first to pre-order a PS5™ Console!

• When clicked, you will be placed in a waiting room

• When it’s your turn, you’ll get access to complete your PS5™ Console Pre-Order Reservation!**

Things to keep in mind:

• When accessing the site, you’ll be asked for your PSN ID log in and password. Have these handy

• Have your credit card details ready

• You may add additional items to your PS5™ Console pre-order reservation.

Pre-order Now (this is the URL)

*If URL is shared with others and they attempt to use it, you may be locked out of the order system.
**Invite valid through 9:59am PT, Saturday 9/19, or while supplies last.
Subject to availability. Unit limits apply.
For more details, please visit our FAQs.