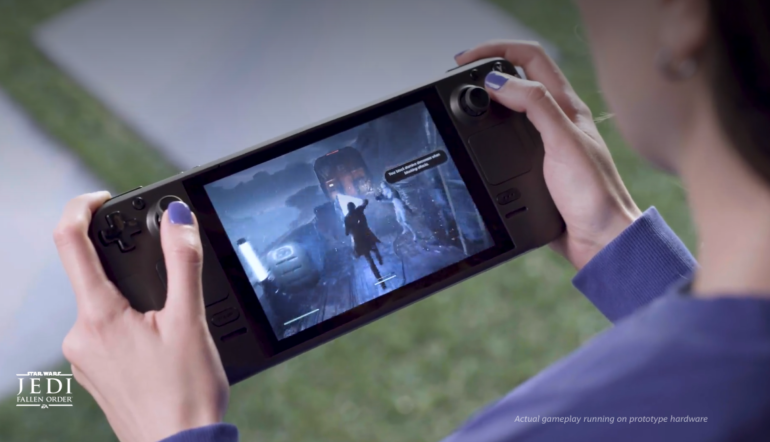 Valve has taken the wraps off a portable PC it has called Steam Deck, which is set to begin shipping in the US, Canada, EU, and UK in December.

Ostensibly a handheld gaming device that is in the same realm as the Nintendo Switch, under the hood, the Steam Deck runs SteamOS 3.0, a new version based on Arch Linux, with KDE Plasma used for desktop mode.

While Valve has said the Linux system will use its Proton compatibility layer to run games designed for Windows, the company said users are free to replace it.

“Steam Deck is a PC, and players will be able to install whatever they like, including other OSes,” it said.

Hardware-wise, Valve said it worked with AMD on a custom 4 to 15-watt APU that has a 4-core Zen 2 CPU and 8-core RDNA 2 graphics unit, as well as 16GB of memory. The Deck contains a 7-inch 1280×800-resolution touchscreen, has a number of trackpads, thumbsticks, buttons, and triggers for input. The 40Wh battery is said to allow around two to eight hours of use, and is charged via a single USB-C port that is also used to connect monitors and docks.

The Deck has three storage options: A base level of 64GB eMMC using PCIe Gen 2, and 256GB NVMe SSD and 512GB “high-speed” NVMe SDD that both use PCIe Gen 3. The storage level chosen determines the cost of the Deck, with unit retailing for $400, $530, and $650 respectively.

There is also a microSD card slot to allow users to store games and have more storage.

Valve said it would also have an official dock that would have one USB-A 3.1 port, two USB-A 2.0 ports, with one ethernet, DisplayPort 1.4, and HDMI ports apiece.

The Deck is far from Valve’s first attempt to push Steam OS, with the Linux-based Steam Machines falling flat when they appeared in 2015.