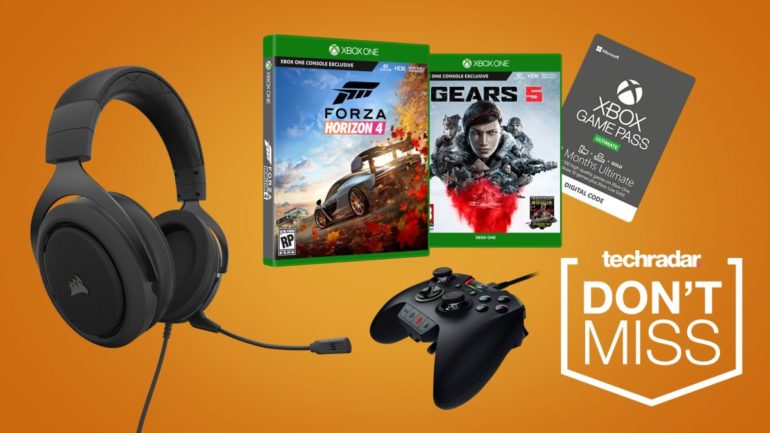 Best Buy is offering up a massive range of Xbox deals this weekend, with discounts lining the shelves for a limited time. From games to premium accessories and even extending to discounts on digital credit at the Microsoft Store, there are Xbox deals to suit everyone up for grabs here.

Halo: The Master Chief Collection has taken a price drop to $19.99 (was $29.99), Forza Horizon 4 is $40 off at just $19.99 and Gears Tactics is now available for $24.99, down from a $59.99 MSRP. If, however, you’re more interested in playing these games on subscription you’ll also find a strong selection of Xbox Game Pass deals available right now as well.

You can grab 3 months of Xbox Game Pass Ultimate for $35.99 (was $44.99) or take advantage of this Game Pass PC bundle that combines discounts on a Corsair HS60 Pro headset and a three month Game Pass PC subscription to save you $30 overall – bringing the final price to just $69.98 for both.

There are plenty more Xbox deals to be found here, and you’ll find all the best discounts outlined just below. Move quickly, though, because these offers will only be available this weekend.

Not in the US? Scroll down for more Xbox game deals and cheap accessories in your region.

Minecraft: $19.99 $14.99 at Best Buy
If you’re getting back to basics, a copy of Minecraft is a must. This Xbox staple is usually found for a pretty good price, but you can save an extra $5 at Best Buy this weekend.
View Deal

Halo: The Master Chief Collection: $29.99 $19.99 at Best Buy
If you can’t quite wait for Infinite, you can catch up on six classic Halo titles with this massive collection of games. Reach, Combat Evolved, Halo 2, Halo 3, Halo 3: ODST and Halo 4 are all included in this bumper pack – and Best Buy is offering it all for $10 less right now.
View Deal

Forza Horizon 4: $59.99 $19.99 at Best Buy
This standard edition gives you access to the massive world of Forza Horizon 4, but doesn’t offer any of the additional DLC content. That said, you’re still getting a steal here for $20, as we rarely see this gem in the Xbox catalogue dropping so low.
View Deal

Gears 5: $39.99 $19.99 at Best Buy
The latest in the canon Gears of War series was released back in 2019 but still holds up particularly well today – especially thanks to that Xbox Series X optimization. You’ll also find it for just $19.99 in Best Buy’s 3-day Xbox sale.
View Deal

Sea of Thieves Anniversary Edition: $39.99 $19.99 at Best Buy
Sea of Thieves has recently received a pretty hefty update, which hopes to bring players back to its pirate-laden shores once again. The online multiplayer world is back in business, then, and you can jump straight into the action for under $20 right now.
View Deal

Gears Tactics: $59.99 $24.99 at Best Buy
Gears Tactics slows down the often chaotic guns-blazing approach of the main franchise. Instead you’ll be taking on some monstrous enemies with turn based strategy in this 2020 release. Plus, at just $24.99 it’s looking like a particularly solid Xbox game deal right now.

Microsoft $100 gift card: $100 $90 at Best Buy
There’s a $10 discount on this $100 Microsoft gift card at Best Buy. That’s perfect if you’re planning on taking advantage of some of Xbox’s own digital discounts this weekend as you can already save cash before you even start spending.
View Deal

Microsoft $50 gift card: $50 $45 at Best Buy
If you’re looking to top up your wallet with a little less, however, you’ll still find a $5 discount on this $50 gift card as well. That’s essentially $5 off any full-priced game of your choosing.
View Deal

Razer Kraken Tournament Edition gaming headset: $99.99 $73.99 at Best Buy
With THX Spatial Audio and adjustable game / chat levels, the Razer Kraken Tournament Edition is already a well priced gaming headset for Xbox. However, you can also save $26 on the green cups this weekend at Best Buy – and you’ll also be able use them with PC, Mac, PS4 and Nintendo Switch as well.
View Deal

Razer Wolverine officially licensed Xbox wired controller: $159.99 $144.99 at Best Buy
If you want a little more power out of your controller, the Razer Wolverine is looking like a great buy this weekend. Best Buy has dropped the price to $144.99 in its latest Xbox deals and you’re getting a super customizable gamepad overall, with extra buttons for re-mapping and a range of interchangeable thumbsticks and D-Pad configurations.
View Deal