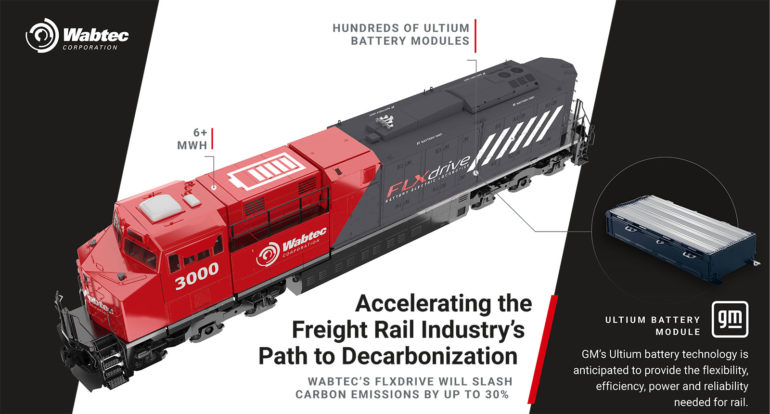 General Motors has signed a deal to develop railroad locomotives powered by a hydrogen fuel cell and battery system.

Under a nonbinding agreement with locomotive maker Wabtec Corp., GM batteries and hydrogen technology will be used in locomotives to help railroads cut carbon emissions.

Wabtec already has built a battery-powered locomotive prototype. The Pittsburgh company said it was used with two diesel locomotives in a California test earlier this year that cut emissions by 11%. Fuel cell locomotives will follow full development of the electric version.

The companies say in a joint statement Tuesday that Wabtec’s experience in energy management will help the companies develop zero-emissions long-haul locomotives.

Financial details of the venture were not released.

GM has been developing hydrogen fuel cell power systems for years. The systems will be assembled at a factory in Brownstown Township, Michigan, near Detroit that is a joint venture with Honda. GM and Honda have been working to jointly develop fuel cell vehicles.

In January, GM announced another partnership to make hydrogen fuel cell power systems for heavy truck company Navistar. The companies will run a test with trucking company J.B. Hunt to haul freight along yet-unidentified corridors in the U.S. in about three years.

Navistar says its hydrogen trucks will be able to go more than 500 miles (800 kilometers) on a single charge and can be refueled in less than 15 minutes.

GM says Hydrogen fuel cells have an advantage over battery-electric powered trucks, with a longer range pulling heavy loads and because they can be refueled faster.