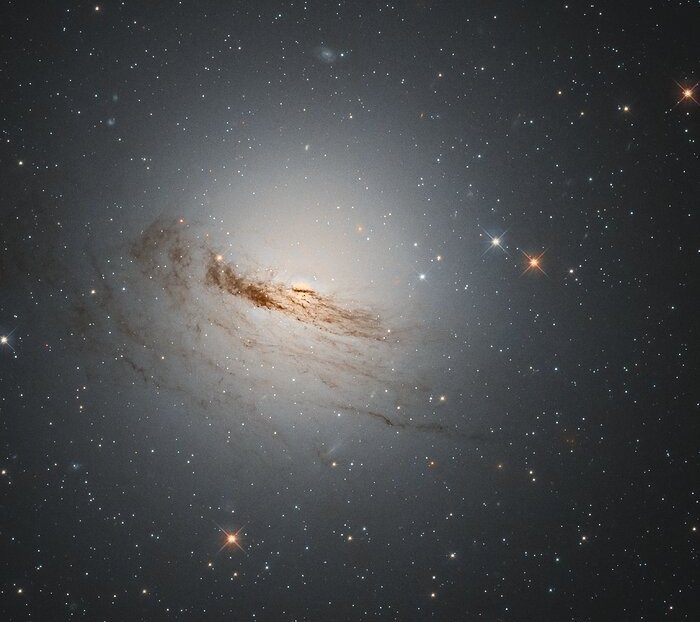 The process, however, is not a quick one. A haunting new Hubble photo of the galaxy NGC 1947 demonstrates this well: Even from a distance of around 45.4 million light-years away (in the southern constellation of Dorado), we can see that the galaxy is slowly on the decline.

The clue lies in the dust and gas. A galaxy in the prime of its life will be filled with the stuff, using it to make new stars. Eventually, the star-stuff will run out, and that’s what astronomers believe we are seeing with NGC 1947.

It’s a rare type of galaxy known as a lenticular galaxy – disk-shaped, like the Milky Way or Andromeda, but without the spiral arms. NGC 1947 used to have spiral arms, but it has used up almost all the gas and dust that gave them structure; all that remains is a few wisps, backlit by starlight.

Galaxies that have created no new stars in billions of years are considered dead – but the Universe isn’t old enough for us to have seen what happens once all those stars also die.

What about our own galaxy? Actually, the Milky Way may have died at least once around 7 billion years ago; it revived after a period of 2 billion years, during which a whole bunch of stars died, going supernova and ejecting their outer envelopes into space, filling the galaxy with material for making new stars.

The Milky Way currently has a relatively slow star formation rate, around 1 to 2 solar masses per year, but it’s also not hurting for new material. Our galaxy is a cannibal, with a history of absorbing other galaxies and all their wonderful star-forming material over its 13.5 billion-year lifespan, and it’s far from done.

Eventually, the Magellanic Clouds will be slurped into the Milky Way, and we’re headed for a merger with the Andromeda Galaxy in a few billion years. This could trigger a period of elevated star formation as the tidal interactions shock and compress material in both galaxies.

Based on observations of the space around NGC 1947, an injection of fresh material from a merger with another galaxy is unlikely, at least any time soon. It’s going to continue to fade, until all that remains is a raft of dead stars.