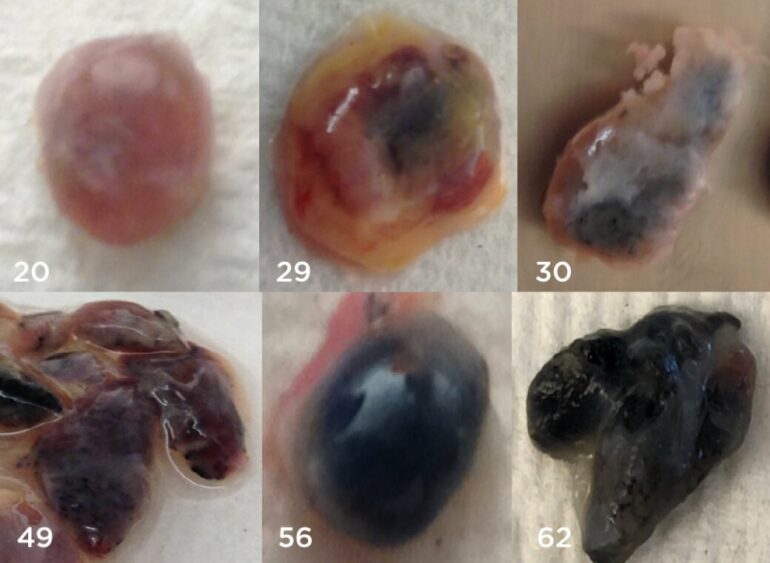 The diminished power of the immune system in older adults is usually blamed on the aging process. But a new study by Columbia immunologists shows that decades of particulate air pollution also take a toll.

The study found that inhaled particles from environmental pollutants accumulate over decades inside immune cells in lymph nodes associated with the lung, eventually weakening the cells’ ability to fight respiratory infections.

The findings—published Nov. 21 in Nature Medicine—offer a new reason why individuals become more susceptible to respiratory diseases with age.

Elderly people are especially vulnerable to respiratory infections, a fact brought into stark relief by the COVID pandemic. The death rate from COVID is 80 times greater in people over age 75 than in younger adults, and the elderly are also more vulnerable to influenza and other infections of the lung.

The Columbia researchers weren’t initially looking at air pollution’s influence on the immune system. More than ten years ago, they began to collect tissues from deceased organ donors to study immune cells in multiple mucosal and lymphoid tissues. Such cells have been largely inaccessible to researchers studying the immune system where sampling is limited to peripheral blood.

“When we looked at people’s lymph nodes, we were struck by how many of the nodes in the lung appeared black in color, while those in the GI tract and other areas of the body were the typical beige color,” says Donna Farber, Ph.D., the George H. Humphreys II Professor of Surgical Sciences (in Surgery) and professor of microbiology & immunology at Columbia University Vagelos College of Physicians and Surgeons, who led the study.

And as the researchers collected more tissue from younger donors, they also noticed an age difference in the appearance of the lung’s lymph nodes: Those from children and teenagers were largely beige while those from donors over age 30 looked were tinged with black and got darker with increasing age.

“When we imaged the lung’s blackened lymph nodes and found they were clogged with particles from airborne pollutants, we started to think about their impact on the lung’s ability to fight infection as people age,” Farber says.

In the new study, she and her colleagues examined tissues from 84 deceased human organ donors ranging in age from 11 to 93, all nonsmokers.

They found that the pollutant particles in the lung’s lymph nodes were located inside macrophages, immune cells that engulf and destroy bacteria, viruses, cellular debris, and other potentially dangerous substances.

The macrophages containing particulates were significantly impaired: they were much less capable of ingesting other particles and producing cytokines—chemical “help” signals—that activate other parts of the immune system. Macrophages in those same lymph nodes that did not contain particulates were unimpaired.

“These immune cells are simply choked with particulates and could not perform essential functions that help defend us against pathogens,” Farber says.

“We do not know yet the full impact pollution has on the immune system in the lung,” Farber adds, “but pollution undoubtedly plays a role in creating more dangerous respiratory infections in elderly individuals and is another reason to continue the work in improving air quality.”

James P. Kiley, Ph.D., director of the Division of Lung Diseases at the National Heart, Lung, and Blood Institute, part of the National Institutes of Health, agrees. “This is an interesting study that suggests air pollution may contribute to why older people become more susceptible to respiratory infections,” says Kiley, who was not a part of the study. “In addition to supporting ongoing efforts to control air pollution, these findings underscore the importance of additional research to better understand the lung effects of inhaled particulates and the interactions between air pollution and chronic lung diseases.”