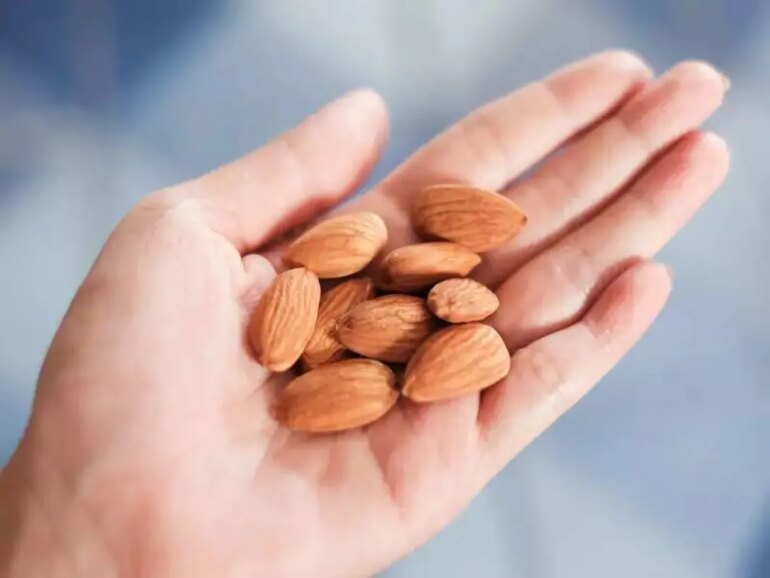 For those who exercise regularly, eating almonds each day might be the ideal new year’s resolution. A randomized controlled trial in Frontiers in Nutrition showed that female and male participants who ate 57g almonds daily for one month had more of the beneficial fat 12,13-dihydroxy-9Z-octadecenoic acid (12,13-DiHOME) in their blood immediately after a session of intense exercise than control participants. This molecule, a so-called oxylipin (oxidized fat) is synthetized from linoleic acid by brown fat tissue, and has a beneficial effect on metabolic health and energy regulation.

Corresponding author Dr. David C Nieman, a professor and director of the Appalachian State University Human Performance Laboratory at the North Carolina Research Campus, said, “Here we show that volunteers who consumed 57g of almonds daily for one month before a single ‘weekend warrior’ exercise bout had more beneficial 12,13-DiHOME in their blood immediately after exercising than control volunteers. They also reported feeling less fatigue and tension, better leg-back strength, and decreased muscle damage after exercise than control volunteers.”

The clinical trial involved 38 men and 26 women between the ages of 30 and 65, who didn’t engage in regular weight training. Approximately half were randomized to the almond diet group, and the other half to the control group, who daily ate a calorie-matched cereal bar. The researchers took blood and urine samples before and after the four-week period of dietary supplementation. Performance measures included a 30 second Wingate anaerobic test, a 50 meter shuttle run test, and vertical jump, bench press, and leg-back strength exercises. Additional blood and urine samples were taken immediately after this 90 minute session of ‘eccentric exercise’ and daily for four days afterwards.

After each blood draw, the participants filled out the ‘Profile of Mood States’ (POMS) questionnaire to quantify their mental state, and rated their delayed onset muscle soreness—that is, pain and stiffness felt after unaccustomed or strenuous exercise—on a 10-interval scale.

As expected, the 90 minute exercise led to an increase in the volunteers’ self-reported feeling of muscle damage and muscle soreness, as well as an increased POMS score, indicating self-reported decreased vigor and increased fatigue, anxiety, and depression.

The exercise also resulted in transient elevated levels of pro-inflammatory cytokines such as IL-6, IL-8, IL-10, and MCP-1 in the blood, consistent with minor muscle damage. However, these changes in cytokines were equal in the almond and cereal bar groups.

Importantly, immediately after exercise, the concentration of the beneficial 12,13-DiHOME was 69% higher in blood plasma of participants in the almond group than in participants in the control group. 12,13-DiHOME is known to increase the transport of fatty acid and its uptake by skeletal muscle, with the overall effect of stimulating metabolic recovery after exercise.

The reverse pattern was found for another oxylipin, the mildly toxic 9,10-Dihydroxy-12-octadecenoic acid (9,10-diHOME), which was 40% higher immediately after exercise in the blood of the control group than in the almond group. Unlike 12,13-DiHOME, 9,10-diHOME has been shown have negative effects on overall health and the body’s recovery to exercise.

Polyphenols in almond skin may be key

Pollution linked to 10% of cancer cases in Europe: report

Nieman and colleagues concluded that daily consumption of almonds leads to a change in metabolism, downregulating inflammation and oxidative stress from exercise and enabling the body to recover faster.

“We conclude that almonds provide a unique and complex nutrient and polyphenol mixture that may support metabolic recovery from stressful levels of exercise. Almonds have high amounts of protein, healthy types of fats, vitamin E, minerals, and fiber. And the brown skin of almonds contains polyphenols that end up in the large intestine and help control inflammation and oxidative stress,” said Nieman.