‘Exercise in a pill’ could offer solution for at-risk people 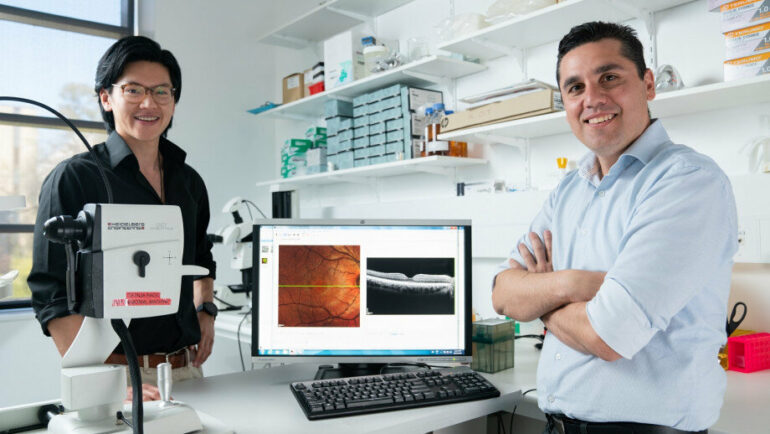 Researchers from The Australian National University (ANU) have identified unique molecular signals in the body that could hold the key to developing a supplement capable of administering the health benefits of exercise to patients incapable of physical activity.

The molecular messages are sent to our brain and potentially our eyes immediately after we exercise.

The ANU team is conducting research to better understand what impact these molecular messages have on retinal health, but also the central nervous system and eye diseases such as age-related macular degeneration (AMD).

Associate Professor Riccardo Natoli, Head of Clear Vision Research at ANU, says the molecules could potentially be hijacked, recoded and “bottled up” in a pill and taken like a vitamin.

“The beneficial messages being sent to the central nervous system during exercise are packaged up in what are known as lipid particles. We are essentially prescribing the molecular message of exercise to those who physically aren’t able to,” he said.

“We think that as you age, the ability to communicate between the muscles and the retina starts to be lost. Similar to taking supplements, maybe we can provide genetic or molecular supplementation that enables that natural biological process to continue as we age.

New ANU research has examined existing literature into the effects of exercise on the central nervous system and eyes. Specifically, the researchers set out to discover what impact exercise has on the retina—the light-sensing part of the eye—and whether exercise can help maintain good eyesight as we age.

Dr. Joshua Chu-Tan, also from the ANU Clear Vision Research Lab, says further research is needed to understand how these molecular signals, which are sent from the rest of the body when we exercise, actually reach our brain and eyes.

He says the team’s preliminary research into the benefits of exercise on the retina has unearthed some “promising” results.

“We know exercise is good for our eyesight, but to what extent is still unknown. Our aim is to understand the benefits of exercise at the molecular level and how it is beneficial for the central nervous system and the retina,” Dr. Chu-Tan said.

“We found the benefits of exercise extend far beyond what has traditionally been known, however this has been largely understudied in the retina, despite the retina being an extension of the brain.

“One of the main goals of doing this review was to determine what’s going on inside the body after we exercise that gives us the benefits of exercise, and why physical activity is so good for our brain and eyes.”

The futuristic therapy could one day help patients suffering from neurological diseases such as Alzheimer’s and Parkinson’s.

“It’s been suggested that prescribing exercise to patients suffering from neurodegenerative diseases such as Alzheimer’s and Parkinson’s can help improve and slow down the disease progression,” Dr. Chu-Tan said.

“We know that from looking at diseases like Alzheimer’s and Parkinson’s if you exercise in a particular fashion you can potentially stimulate neuronal activity.

“That hasn’t really been looked at in the retina at the level we’re thinking of. We want to understand the molecular messages that underpin the benefits of exercise.”

The researchers say the supplement would be intended only for patients who have restricted movement that renders them unable to exercise at an intensity needed to reap the rewards. It is not intended for the general public.

“We can’t possibly package all the effects of exercise into a single pill, there are too many benefits that stretch throughout the entire body beyond what we could ‘prescribe’ and that’s not the goal,” Dr. Chu-Tan said.

Dr. Chu-Tan, Tuckwell Scholar Max Kirkby and Associate Professor Natoli’s systematic review of existing literature into the benefits of exercise on the central nervous system and eyes, including the retina, is published in Clinical and Experimental Ophthalmology.


Citation:
‘Exercise in a pill’ could offer solution for at-risk people (2021, December 1)