How our genes influence our gut health 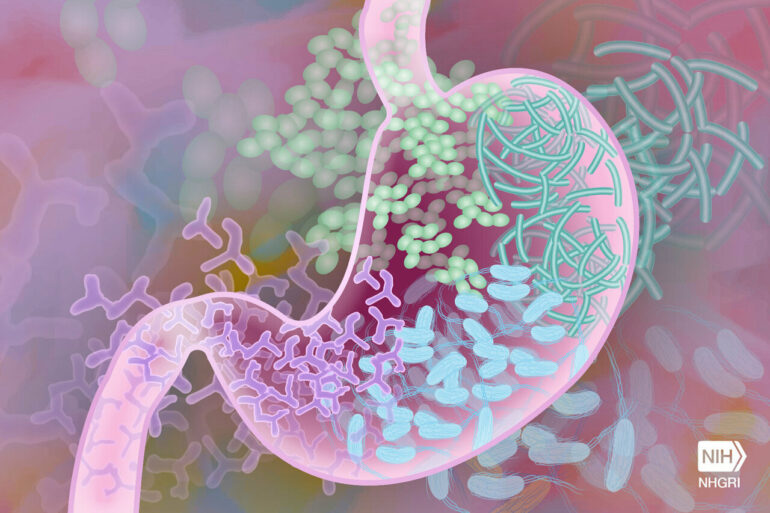 A new study published today in Nature Genetics provides a powerful and comprehensive insight into the influence of our genes on our gut health and their role in shaping our gut microbiota.

We’ve known for a long time that what we eat plays an important role in influencing the composition of our gut microbiota, but the role of our own genes is still unclear. This latest paper shows a robust association between certain genes varying in the population and the presence of particular microbes in our gut, including genes that are strongly associated with conditions such as lactose intolerance or blood type.

Led by the Cambridge-Baker Systems Genomics Initiative, involving researchers from the Baker Heart and Diabetes Institute in Melbourne and the University of Cambridge in the UK, as well as researchers from the Universities of Helsinki, Turku (Finland) and the University of California San Diego (USA), the authors used high-performance computing  to analyze large genomic and microbiome datasets, and found strong associations between specific genes and the presence and abundance of various common gut microbes.

Previous studies examining whether human genetic variation can affect gut microbiota have suggested an unclear and complex combination of environment and genetics, which the authors sought to clarify using a dataset with a large sample size. Researchers leveraged a large-scale population cohort dataset from the internationally-regarded FINRISK Study (a large Finnish population survey), to analyze the micro-organisms in the gut, dietary information and health records of nearly 6000 people from various geographical areas of Finland over a period of 16 years.

Baker Institute researcher and microbiologist Dr. Guillaume Meric, who co-led the work, said the study was one of the largest of its kind and provided a greater insight into the role of genes on our gut microbiota, by providing statistically robust findings from a large representative population survey.

Dr. Meric said large computing capabilities together with more affordable sequencing for a large number of samples combined to make this a hot area of science, with several comparable high-impact studies being published, or soon to be published, in this area.

He noted that the deep data dive enabled the researchers to characterize human genetic variations associated with varying concentrations and diversity of microbes in the gut, which also allowed for the prediction of possible causative or protective links of particular gut microbes on various diseases.

Dr. Meric also stated that the paper identified a number of very strong associations between genes, microbes in the gut and various diseases and conditions, with promising candidates linked to lactose intolerance, colorectal cancer, or major depressive disorder. In total, the researchers identified 567 distinct genetic variants associated with levels of >200 microbial species in the gut, with the paper opening up important areas of exploration to further understand how we might detect and treat various diseases based on these powerful genetic and microbial insights.

“We, as humans, have co-evolved with the microbes living within and on us for hundreds of thousands of years. This has resulted in a very finely tuned balance between our microbes, our genes, our diets and our health that is still to this day very complex to untangle and study. One promising way to shed more light on this fascinating association is to investigate very large datasets of several thousand participants, to robustly identify common associations. Several other recent studies focusing on people from other parts of the world are already complementing our observations. Collectively, this body of work provides striking examples of the intricate relationship between humans and their gut microbial communities, and highlights important health implications,” concluded Dr. Meric.

Citation:
How our genes influence our gut health (2022, February 3)