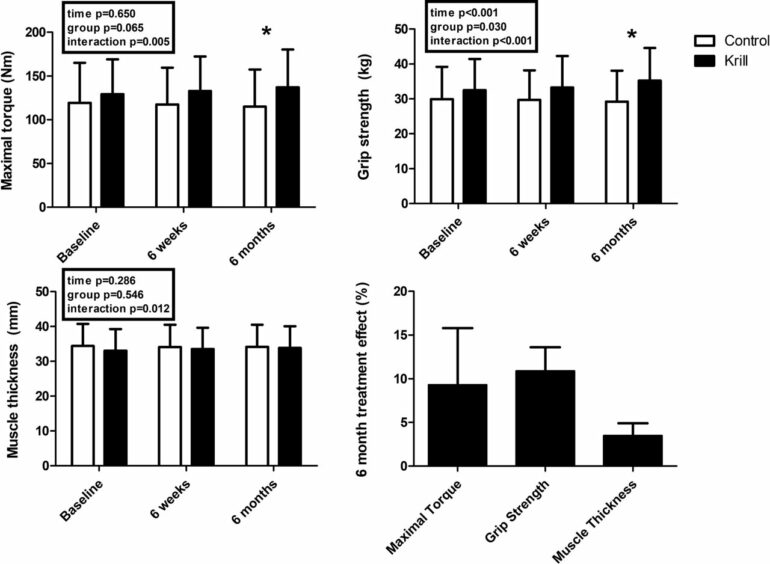 Krill oil may be beneficial to muscle function and size in healthy people over the age of 65, according to new research.

The study—led by the University of Glasgow’s Institute of Cardiovascular and Medical Sciences (ICAMS) and published in Clinical Nutrition—found that krill oil supplementation of four grams per day could have beneficial effects on skeletal muscle function and size in this age group.

Krill oil contains high concentrations of the omega-3 fatty acids DHA and EPA, which previous scientific studies have shown are important nutrients for the body as it ages.

The randomized, double blind, controlled trial included 102 men and women all above 65 years of age. The participants were relatively inactive to engaging in less than one hour of self-reported exercise each week on entry to the study.

The participants were randomly divided into two groups, a control group that received the placebo and a test group that received four grams per day of Superba krill oil from industry collaborator Aker BioMarine. Prior to the start of the study, researchers measured baseline levels for thigh muscle strength, grip strength and thigh muscle thickness, as well as short performance physical function and a range of factors, such as body fat and blood lipid levels.

The study found that participants receiving daily krill oil supplements showed the following improvements (from baseline) at the end of the study:

Dr. Stuart Gray, Senior Lecturer at the University of Glasgow’s ICAMS, said: “This is yet another a strong indication that the omega-3 fatty acids EPA and DHA are important nutrients for adults as we age, and we are keen to investigate this further, particularly whether this could be a useful treatment for those who already have muscle weakness.”

Line Johnsen, VP science and regulatory affairs, Aker BioMarine, said: “As humans age, we experience a slow deterioration of our muscle mass and function. Previous research has indicted that EPA and DHA supplementation can positively impact muscle protein synthesis, muscle volume and strength, and interestingly this new study also suggests that choline in krill oil may have additional beneficial effects for skeletal muscle metabolism and health. This study strengthens the hypothesis that daily supplementation of krill oil for an extended period can improve knee thigh muscle strength, grip strength and muscle thickness in healthy, older adults.”

The paper, “The effect of krill oil supplementation on skeletal muscle function and size in older adults: A randomised controlled trial,” is published in Clinical Nutrition.


Citation:
Krill oil may be beneficial to muscle function and size in healthy people over the age of 65 (2022, May 5)