Lessons on nutrition easy to digest in virtual reality spaces 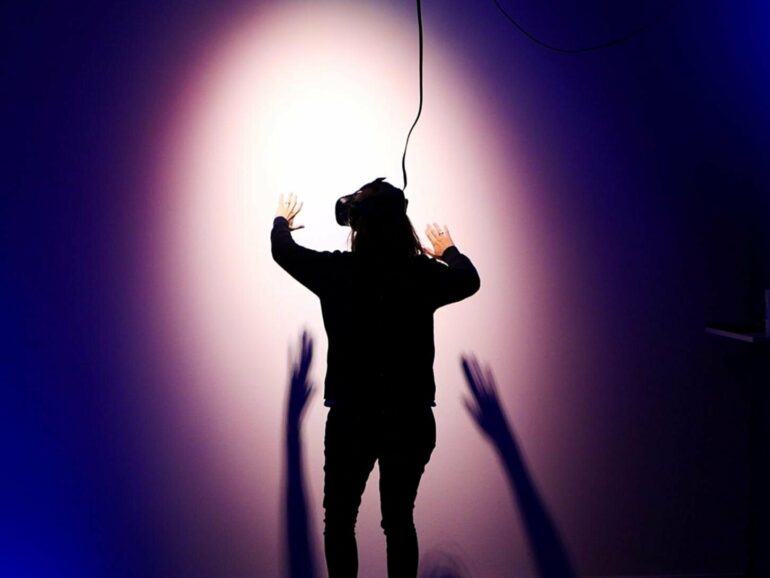 Virtual reality (VR) may provide nutrition teachers and dietitians with an entirely new way to serve real lessons on healthy eating, according to a team of Penn State researchers.

In a study, students learned about nutrition both through an interactive VR lesson, as well as during a more traditional lecture that was hosted in a VR environment. The research also showed that nutrition educators might not even need all the bells and whistles of VR interactivity for those lessons to be effective.

The findings suggest nutrition educators can use VR environments—in both immersive and traditional formats—for remote education. It could lead to a more scalable way to develop and distribute lessons on nutrition, including ones on portion control, according to Travis Masterson, who is the Broadhurst Career Development Professor for the Study of Health Promotion and Disease Prevention and Institute for Computational and Data Sciences affiliate.

“One thing that comes up in nutrition is there is a lot of time spent on education and, as education professionals, we try to provide very simple information to people, but that might not be the most effective way,” said Masterson, who is also the director of the Health, Ingestive Behavior and Technology Laboratory. “When you learn about food, you learn best by experience—by actually dealing with food. For example, if you’re watching a cooking show, you don’t suddenly know how to cook. You need some hands-on experience. So, in this case, we weren’t trying to teach someone how to cook, but trying to get some of those food principles across the people.”

In virtual reality, a technology that produces a virtual 3D environment for the user, the team created an interactive space where students could have a hands-on—virtually speaking—experience with food to learn about portion control, as well as a lecture-based lesson that was designed to replicate how an instructor would teach a real-world class.

While the researchers expected that the students would learn more in the interactive treatment of the experiment, students learned about the same in both conditions.

According to Pejman Sajjadi, a postdoctoral researcher at the Center for Immersive Experiences, who is also the first author of the paper, VR’s ability to induce embodiment and presence—a feeling that a person is in a body that is inhabiting an actual space—may account for the improved learning with, or without, interactivity.

“We did this research based on the premise that the affordance of virtual reality—naturalness of the interactivity that’s supported through VR, the way it resembles what we do in real life—would play a key role in the reaction,” said Sajjadi. “But, when we manipulated the interactivity affordance in a sense, we didn’t account for the manipulation of presence and the sensation of embodiments, which remain pretty much the same across the two conditions. For both the interactive and the passive conditions, the people have the headset on and are experiencing being transported to an alternate reality. Now, our results did show that both gain tremendous amount of conceptual knowledge in both conditions.”

The study shows that virtual reality—interactive or not—might be a good way for students to learn portion control lessons, said the researchers. Portion control and its connection to eating foods that have more nutrition, but fewer calories—or dense foods—are critical lessons to help people eat healthier.

“There is robust data that when people are presented with more food, those people—across age groups—tend to eat more food,” said Masterson. “So, the idea is that people tend to eat the same amount of food, in terms of weight, but not in terms of calories. What we want to do is get people to eat more food, but less calories. The goal of this educational content is to try and get people to see that they don’t have to limit all of their favorite foods. What you want to do instead is eat smaller amounts of it and give yourself more of low-energy-dense foods.”

Masterson said that while the findings suggest that students could learn in virtual spaces, future research would be needed to find out how virtual reality compares to portion control lessons in traditional, real-world classes. Current methods include meetings with dietitians, often supplemented with printed handouts and PowerPoint presentations. While this approach can be effective, the researchers suggest it is difficult to scale because of the limited number of dietitians in certain locations and the cost of multiple sessions.

For the study, the researchers recruited 45 virtual reality users who downloaded an application that educated users about food-energy density and portion-size control. The interactive version gave participants the ability to use a virtual knife to cut food items and use virtual hands to grab and assemble meals based on a calorie goal. The participants of the interactive version could also hear instructions from a dietician during the session. In the passive version, participants listened to a virtual dietician deliver lessons on energy density and portion size.

In the future, the researchers said they may probe deeper into how presence and embodiment affect learning in virtual worlds, as well as explore whether knowledge gained in the virtual world would turn into changed behaviors in the real world. They also suggest that this is just the beginning of the use of VR technology for nutrition education and whether VR classes compared to real world classes.

“I was really happy that we touched on an interesting topic in this project and I think the power of virtual reality can even transform the field of nutrition education,” said Sajjadi.

The researchers published their work in Frontiers in Computer Science.