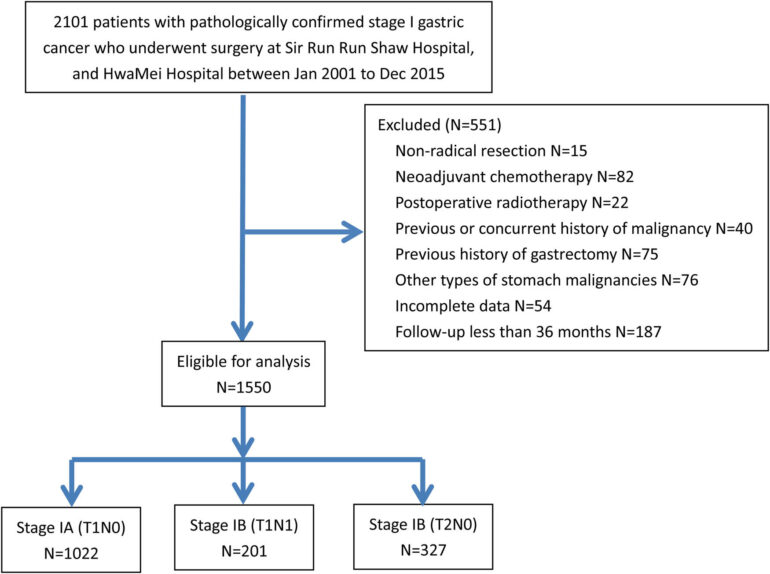 Marital status is likely to be an important contributory factor in predicting long term survival in people with early stage gastric cancer, suggests research published online in the Journal of Investigative Medicine.

It should be added to the usual list of clinical and personal variables used to inform how long a person is likely to live after diagnosis, say the researchers.

Gastric cancer is the fifth most common type of cancer and the third leading cause of cancer death globally, with over 1 million new cases and 780,000 deaths in 2018 alone. The disease is around twice as common in men as it is in women, but rare below the age of 50.

If caught early, the chances of survival are greatly increased. But while the prognostic value of marital status has been recognized for people with cancers of the liver and the lung, it isn’t included in the list of predictive survival factors for early stage gastric cancer.

The researchers therefore wanted to find out if marital status might also be a valid factor in helping to predict long term outcomes in people with early stage gastric cancer.

They drew on clinical information that had been entered into the Surveillance, Epidemiology, and End Results (SEER) database from 3647 patients diagnosed between 2010 and 2015 with early stage gastric cancer—-that hadn’t spread beyond the stomach to other parts of the body.

Participants were randomly divided into two groups: a ‘training’ group of 2719 people to draw up a nomogram—a mathematical model showing the relationships between different variables; and a test group of 928 people to validate the model.

The aim was to understand which factors reliably predict time from diagnosis until death from any cause.

Overall, survival prospects were better among women than among men and among people who were married.

In the training group, people who were married had the best prognosis (average 72% chance) while widows had the worst (average 60% chance).

Similarly, when gender was taken into account, the chances of survival were highest for married men (average 69%); and married women (average 76%), while they were lowest for widowers (average 51%) and widows (average 61%).

Based on these data, the researchers built a nomogram to predict 3 and 5-year survivals, in which each variable was scored from 0–100 according to its contribution to survival, and assigned people a high or low risk of recurrence or death.

The nonogram reliably predicted survival, differentiating between those at high and low risks of recurrence or death. The C-index—-a statistical indicator of agreement between real and predicted outcome—was 0.791. A value over 0.7 is regarded as good.

Tumor size was the largest contributory factor to risk of death or recurrence. This isn’t surprising, say the researchers, as a larger tumor is more aggressive while a barely visible one is slow growing.

Marital status also showed moderate influence on survival. Married people had the best prognosis, followed by single people, while the prognosis of separated patients was the worst.

This might be because married people tend to be better off financially and more likely to receive emotional encouragement from their spouse, suggest the researchers. The observed gender differences may also reflect genetic and/or lifestyle differences, they add.

This is a modeling study, and as such, can’t establish cause. And some well known risk factors for gastric cancer, such as family history, alcohol intake, and Helicobacter pylori infection, weren’t included in the study.

Nevertheless, the researchers conclude: “All patients diagnosed with early stage [gastric cancer] can use our nomogram to assess their prognostic risk after receiving corresponding treatment.

“For high-risk patients, review frequency and follow-up times should be increased. Patients themselves should pay more attention to symptom fluctuation and improvements in lifestyle.”

More social help and care should be provided to widowed or single people who are diagnosed with the disease, they add.