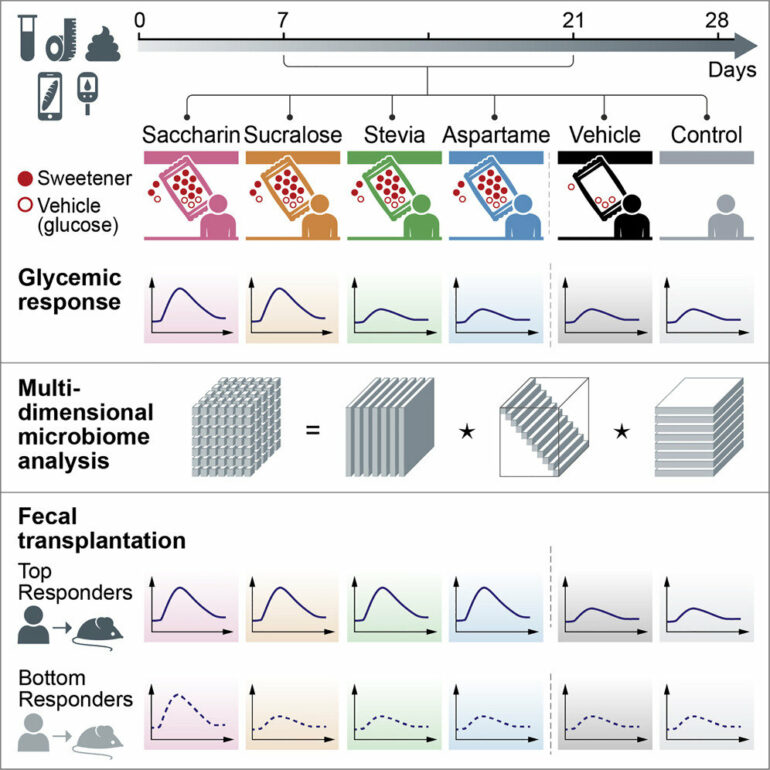 Since the late 1800s non-nutritive sweeteners have promised to deliver all the sweetness of sugar with none of the calories. They have long been believed to have no effect on the human body, but researchers publishing in the journal Cell on August 19 challenge this notion by finding that these sugar substitutes are not inert, and, in fact, some can alter human consumers’ microbiomes in a way that can change their blood sugar levels.

In 2014, senior author Eran Elinav an immunologist and microbiome researcher at the Weizmann Institute of Science and the German National Cancer Center (DKFZ) and his team found that non-nutritive sweeteners affected the microbiomes of mice in ways that could impact their glycemic responses. The team was interested in whether these results would also be found in humans.

To address this important question, the research team carefully screened over 1,300 individuals for those who strictly avoid non-nutritive sweeteners in their day-to-day lives, and identified a cohort of 120 individuals. These participants were broken into six groups: two controls and four who ingested well below the FDA daily allowances of either aspartame, saccharin, stevia, or sucralose.

To establish causation, the researchers transferred microbial samples from the study subjects to germ-free mice—mice that have been raised in completely sterile conditions and have no microbiome of their own.

“The results were quite striking,” says Elinav. “In all of the non-nutritive sweetener groups, but in none of the controls, when we transferred into these sterile mice the microbiome of the top responder individuals collected at a time point in which they were consuming the respective non-nutritive sweeteners, the recipient mice developed glycemic alterations that very significantly mirrored those of the donor individuals. In contrast, the bottom responders’ microbiomes were mostly unable to elicit such glycemic responses,” he adds. “These results suggest that the microbiome changes in response to human consumption of non-nutritive sweetener may, at times, induce glycemic changes in consumers in a highly personalized manner.”

Elinav says that he expects the effects of the sweeteners will vary person to person because of the incredibly unique composition of our microbiome. “We need to raise awareness of the fact that non-nutritive sweeteners are not inert to the human body as we originally believed. With that said, the clinical health implications of the changes they may elicit in humans remain unknown and merit future long-term studies.”

“In the meantime, we need to continue searching for solutions to our sweet tooth craving, while avoiding sugar, which is clearly most harmful to our metabolic health,” says Elinav. “In my personal view, drinking only water seems to be the best solution.”