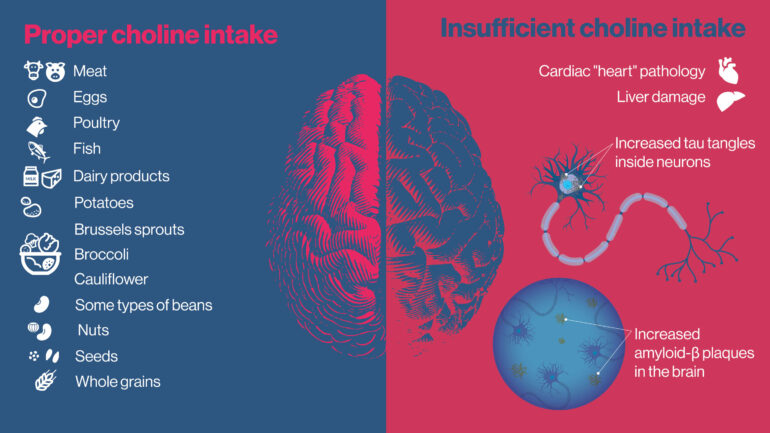 Choline, an essential nutrient produced in small amounts in the liver and found in foods including eggs, broccoli, beans, meat and poultry, is a vital ingredient for human health. A new study explores how a deficiency of dietary choline adversely affects the body and may be a missing piece in the puzzle of Alzheimer’s disease.

It’s estimated that more than 90% of Americans are not meeting the recommended daily intake of choline. The current research, conducted in mice, suggests that dietary choline deficiency can have profound negative effects on the heart, liver and other organs.

Lack of adequate choline is also linked with profound changes in the brain associated with Alzheimer’s disease. These include pathologies implicated in the development of two classic hallmarks of the illness: amyloid plaques, which aggregate in the intercellular spaces between neurons; and tau tangles, which condense within the bodies of neurons.

The new research, led by scientists at Arizona State University and published in Aging Cell, describes pathologies in normal mice deprived of dietary choline and in choline-deficient transgenic mice, the latter of which already exhibit symptoms associated with the disease. In both cases, dietary choline deficiency results in liver damage, enlargement of the heart and neurologic alterations in the AD mice, typically accompanying Alzheimer’s disease and including increased levels of plaque-forming amyloid-beta protein and disease-linked alterations in tau protein.

Further, the study illustrates that choline deficiency in mice causes significant weight gain, alterations in glucose metabolism (which are tied to conditions such as diabetes), and deficits in motor skills.

In the case of humans, “it’s a twofold problem,” according to Ramon Velazquez, senior author of the study and assistant professor with the ASU-Banner Neurodegenerative Disease Research Center. “First, people don’t reach the adequate daily intake of choline established by the Institute of Medicine in 1998. And secondly, there is vast literature showing that the recommended daily intake amounts are not optimal for brain-related functions.”

Ramon Velazquez led the new study on the importance of dietary choline for the brain and other organs. He is a researcher in the ASU-Banner Neurodegenerative Disease Research Center.

The research highlights a constellation of physical and neurological changes linked to choline deficiency. Sufficient choline in the diet reduces levels of the amino acid homocysteine, which has been recognized as a neurotoxin contributing to neurodegeneration, and is important for mediating functions such as learning and memory through the production of acetylcholine.

The growing awareness of choline’s importance should encourage all adults to ensure proper choline intake. This is particularly true for those on plant-based diets, which may be low in naturally occurring choline, given that many foods high in choline are eggs, meats, and poultry.

Plant-based, choline-rich foods, including soybeans, Brussels sprouts and certain nuts can help boost choline in these cases. Moreover, inexpensive, over-the-counter choline supplements are encouraged to promote overall health and guard the brain from the effects of neurodegeneration.

Choline is needed to produce acetylcholine, a neurotransmitter that plays an essential role in memory, muscle control and mood. Choline also builds cell membranes and helps regulate gene expression. The established recommendations set forth by the Institute of Medicine were based on evidence preventing fatty liver disease in men. New lines of evidence imply that the established recommended daily intake of dietary choline for adult women (425mg/day) and adult men (550mg/day) may not be optimal for proper brain health and cognition. Additionally, approximately 90% of Americans are not meeting the recommendation levels and may not even be aware that dietary choline is required on a daily basis.

Despite decades of research and billions of dollars invested since the discovery of the devastating ailment of Alzheimer’s disease over a century ago, there remains no therapy capable of slowing the advance of the illness. Yet new research findings suggest that environmental and lifestyle changes, including an adequate intake of choline, may help protect the brain from Alzheimer’s disease as well as improving overall health.

Velazquez is joined on the study by co-lead authors Nikhil Dave and Jessica Judd. The work is highly interdisciplinary, including researchers from the ASU Biosciences Mass spectrometry facility, and the Translational Cardiovascular Research Center at the University of Arizona College of Medicine in Phoenix, AZ.

“This collaborative work, spanning multiple institutions and surveying the molecular processes of aging at the systems level, adds to the body of evidence produced around the importance of dietary choline in healthy aging,” said Nikhil Dave.

“What I found particularly compelling about this project was that multiple organs, whose malfunction can have implications for brain health, were negatively impacted by a choline-deficient diet,” said Jessica Judd.

A prolific and mysterious killer

Alzheimer’s disease is the leading cause of dementia and the fifth leading cause of death among Americans aged 65 and older. Today, Alzheimer’s affects 6.5 million in the U.S. alone and is projected to strike close to 14 million Americans by 2060. By then, the costs of managing Alzheimer’s are expected to exceed a $20 trillion, threatening the healthcare infrastructure while causing immense suffering.

The accumulation of sticky protein fragments (which form amyloid-beta plaques) outside neurons, and the buildup of an abnormal form of the protein tau within the bodies of neurons (tau tangles), have long been recognized signposts of Alzheimer’s disease. These brain alterations are typically followed by neurodegeneration, involving the damage and destruction of neurons. Plaques are believed to damage cell-to-cell communications in the brain while tangles block the transport of vital nutrients essential for proper cell function and survival.

In addition to amyloid-beta plaques and neurofibrillary tangles, the disease causes cell death in the brain and increasing cognitive impairment. The current work also found dysregulation of proteins in the hippocampus, a key structure affected in Alzheimer’s disease, tied to learning and memory. Both normal and AD mice showed dysregulated proteins in the hippocampus on a choline-deficient diet, with the AD model showing severe effects.

The recent, dramatic increase in Alzheimer’s disease incidence is of grave concern. Although deaths from stroke, heart disease and HIV decreased between 2000 and 2019, deaths from Alzheimer’s increased more than 145%. In addition to the toll on patients caused by the disease, Alzheimer’s has placed an immense burden on those caring for the sick. In 2021 alone, 16 billion hours of care were provided by over 11 million family members and other unpaid caregivers.

The first outward symptoms of the disease are usually related to language, memory, and thinking problems, as brain regions associated with these tasks tend to be among the first affected. Yet researchers now know that by the time the disease causes observable symptoms, it has been quietly ravaging the brain for 20 years or more.

Many factors contribute to the development of Alzheimer’s disease, from genetic predisposition to age, lifestyle and environmental influences. For reasons that remain murky, females face an increased risk of developing the disease.

Gratitude may improve your health

Recent studies have identified diet as a significant factor associated with preventing cognitive decline. In earlier research, Velazquez and his colleagues demonstrated that when mice were fed a high choline diet, their offspring showed improvements in spatial memory, compared with a normal choline regimen in the womb. Intriguingly, the beneficial effects of choline supplementation are transgenerational, not only protecting mice receiving choline supplementation during gestation and lactation, but also the subsequent offspring of these mice, suggesting inherited modifications in their genes.

Subsequent studies in the Velazquez lab showed that choline administered to female mice throughout life yielded improvements in their spatial memory, compared with those receiving a normal choline regimen.

The new study examines mice at 3-12 months, or early to late adulthood (roughly equivalent to 20-60 years of age for humans). In the case of both normal and transgenic mice displaying symptoms of Alzheimer’s, those exposed to a choline-deficient diet exhibited weight gain and adverse effects to their metabolism. Damage to the liver was observed through tissue analysis, as was enlargement of the heart. Elevated soluble, oligomeric and insoluble amyloid-beta protein were detected, as well as modifications to tau protein characteristic of those leading to neurofibrillary tangles in the brain.

Further, choline-deficient mice performed poorly in a test of motor skills, when compared with mice receiving adequate choline in their diet. These adverse effects were heightened in the transgenic mice. Translating these findings to humans, this implies that people who are predisposed to Alzheimer’s disease or in the throes of the illness should ensure they are getting enough choline.

The study also involved a detailed exploration of proteins in the hippocampus, an area of the brain acutely affected by Alzheimer’s disease, as well as proteins detected in blood. Dietary choline deficiency altered important hippocampal networks. These pathologies include disruption of pathways associated with microtubule function and postsynaptic membrane regulation—both essential for proper brain function. In blood, proteins produced in the liver that play a role in metabolic function were particularly dysregulated with the choline-deficient diet.

“Our work provides further support that dietary choline should be consumed on a daily basis given the need throughout the body,” Velazquez says.

Ultimately, controlled human clinical trials will be essential for establishing the effectiveness and appropriate dosages of choline, before encouraging lifelong choline supplementation. Nevertheless, the powerful new findings offer hope that choline may be one tool in the arsenal needed to defend the brain from neurodegeneration and age-related cognitive decline.