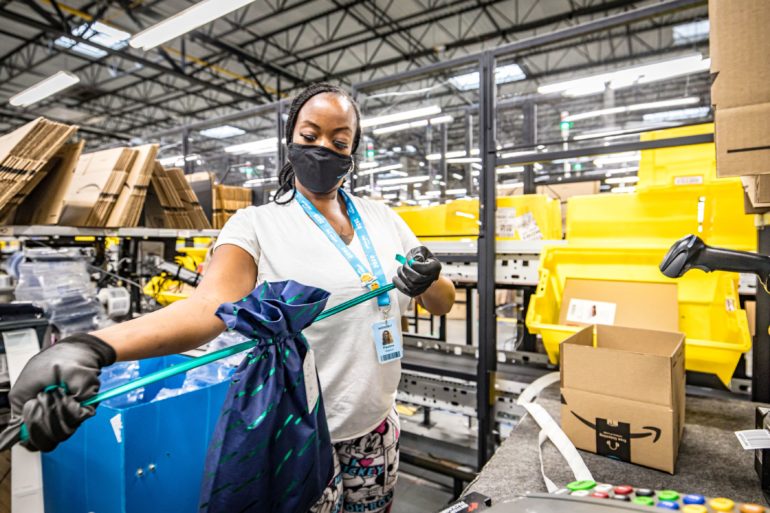 Black Friday is set to kick a holiday season unlike any other into high gear.

The pressure is on for Amazon and other retailers to prove they can navigate above-average online orders tied to the pandemic combined with the holiday shopping rush. More consumers than ever are expected to do their gift buying online this year, which could mean that products fly off the virtual shelves faster and shipping capacity becomes scarce.

Amazon is entering the holiday season in a much stronger position than it started off with at the beginning of the year. The early months of the coronavirus pandemic served as the biggest test yet on Amazon’s warehouse and delivery capacity. It struggled to keep up with demand, which resulted in a rare disruption to its vaunted two-day delivery promise.

Since then, Amazon has spent several months ramping up its fulfillment and logistics systems to make sure it has a smooth holiday season. The company has increased transportation capacity, staffed up its warehouses significantly and put more selection in its warehouses closer to customers.

The company has been busy expanding its warehouse footprint to have more space to store goods. So far this year, the company has opened more than 75 new fulfillment centers, sort centers, regional air hubs and delivery stations in the U.S. and Canada.

Amazon said it would hire 100,000 seasonal employees to help manage holiday demand this year. It hired 200,000 temporary workers during last year’s holiday season. But the company has already been on a hiring spree since the height of the coronavirus pandemic, bringing on 175,000 new operations jobs between March and April, then an additional 100,000 workers in September.

It means that Amazon could be one of the few retailers to outlast what some are calling “shipageddon,” or the capacity shortage expected to hit major shipping carriers this holiday season.

“Amazon is a well-oiled machine,” said Andrea Leigh, vice president of strategy and insights at e-commerce advisory firm Ideoclick and a former Amazon executive. “They’re not going to be the ones that are going to fall down this holiday.”

Even so, Amazon may still make some minor tweaks to help lighten the holiday load.

Earlier this week, Amazon highlighted some of its alternative delivery options that allow holiday shoppers to retrieve their own packages from brick-and-mortar retail locations and neighborhood “hubs.” The company also pointed to its “Amazon Day” service, which lets shoppers receive all of their Amazon orders on a single day, instead of throughout the week.

Some interpreted the move as a way for Amazon to save some last-mile delivery capacity amid the holiday delivery rush, which Amazon denied. The company said the services are “about providing more choice for customers.”

Leigh said she’s also noticed Amazon has made it more expensive for shoppers to make package returns via scheduled pickup. Currently, Amazon first suggests that shoppers drop off their returns at a Kohl’s, an Amazon Locker or a UPS Store, which is free, in the returns window on its site.

An Amazon spokesperson denied that the company is pushing shoppers to drop off their packages or increasing the cost of scheduled pickup.

“This is not true,” the spokesperson said. “Amazon offers customers a variety of free, easy, convenient ways to return an item from shipping it back to dropping it off — it’s all about what’s most convenient for the customer.”

Amazon may also increase incentives for shoppers who choose “no-rush shipping” at checkout or subtly push shoppers to use it by making it the default shipping option at checkout, Leigh said. The company already added a banner to the checkout window advertising a $3 digital credit if consumers are willing to wait a few extra days for their package to arrive.

“Amazon can’t just push people into weeklong deliveries, because there’s already plenty of people who complain about Prime and not getting things in two days,” Kaziukenas said. “If they did it aggressively, that would only increase.”

If consumers aren’t willing to wait a few extra days, Amazon can offload some of the demand to its third-party sellers — a strategy some merchants say the company has already deployed, according to Bloomberg.

An Amazon spokesperson denied that it’s diverting orders outside its fulfillment network.

“Stringing together a few anecdotes doesn’t mean something is broadly true,” the spokesperson said. “We’ve invested heavily in our fulfillment and logistics capacity to provide fast delivery this holiday season, and have not changed how offers are presented to customers to shift volume from Amazon fulfilment to seller fulfilment.”

Amazon could also rely on some of the tools it used to meter demand during the pandemic as it heads into the final weeks and days of the holiday shopping season. Between March and May, Amazon made a series of tweaks to get shoppers to order less, including removing “Daily Deals” from the homepage, as well as stopping coupons and product recommendations.

“It’s not unlikely that we may see some version of that again later into Q4, because it’s just a very effective way for them to manage sales on the site,” Kaziukenas said. “It’s almost like a dial they can turn.”

Real challenges may come later on

For Amazon, the true challenge may not materialize until mid-December. That’s when major carriers UPS, FedEx and the Postal Service will start to enforce holiday shipping deadlines. After Dec. 15, carriers can no longer guarantee that ground-delivery orders will arrive before Christmas Day.

The shipping cutoff could drive a surge of last-minute gift buyers to Amazon as it becomes one of the few sites that can ensure on-time delivery in the eleventh hour, thanks to its dedicated delivery army.

“Dec. 16 is going to be like Black Friday for Amazon,” said James Thomson, a consultant for third-party sellers and former head of Amazon Services, in an interview. “It’s going to be unlike anything that’s ever been seen. Not only because it’s right before Christmas and it’s a big online year and Covid, but because everybody else is dependent on carriers that don’t have the capacity to get the job done.”

Amazon still relies on the USPS, UPS and FedEx to deliver some packages. But its growing in-house logistics network, which spans trucks, planes, delivery vans and contracted delivery drivers, has stepped in to cover a growing share of deliveries.

Deliveries through Amazon’s logistics network account for more than 50% of its shipments, both in the U.S. and globally, Amazon said.

The company’s dedicated delivery fleet will come in handy like in previous holidays but especially this year, as many more consumers shop from their couch and don’t feel safe running to the store for last-minute gifts.

“Their ability to make a promise and say it will arrive by Tuesday, and sure enough it arrives by Tuesday — they’re going to be able to do that much better than anyone else,” Thomson said.