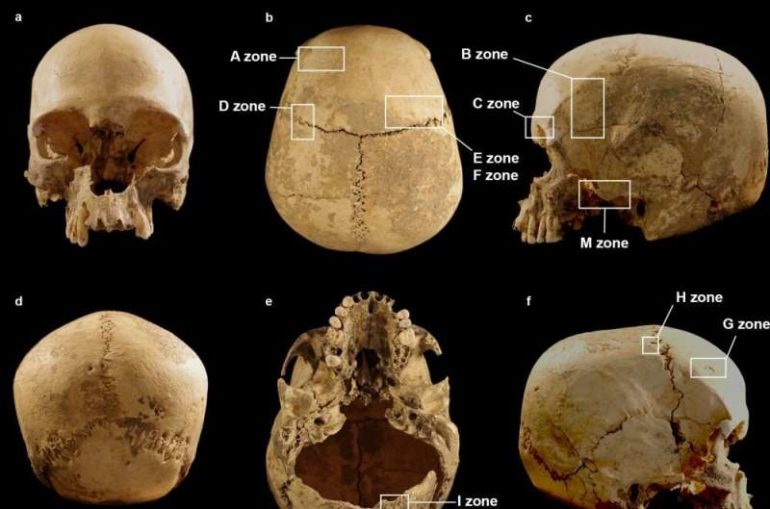 A lone cranium in an Italian cave wound up there after being washed away from its original burial site, according to a study published March 3, 2021 in the open-access journal PLOS ONE by Maria Giovanna Belcastro of the University of Bologna, Italy and colleagues.

In 2015, archaeologists discovered a single human cranium (a skull without a lower jaw) in a gypsum cave in Northern Italy called Marcel Loubens cave. Caves are known to have been used for funerary practices in ancient Italy, but the fact that there are no other human remains in this cave has raised questions about how this skull came to be there, inspiring the researchers in this study to conduct a detailed analysis on the bone.

The structure of the bone indicates that it belonged to a woman between 24 and 35 years old at death. Carbon dating places the remains between 3630-3380 BC, during the Eneolithic period. Several lesions on the bone appear to be damage caused during the removal of soft tissues after death as part of a funeral ritual, while other damage and encrusted sediment on the bone are evidence that it was moved by natural processes not long afterward.

With this evidence, the researchers reconstructed the journey of the skull. After being treated and laid to rest in a burial place, the skull of this corpse rolled away, most likely moved by water and mud down the slope of a sinkhole and into the cave. Later, continued sinkhole activity created the modern structure of the cave, with this bone still preserved within. Besides revealing this fascinating story, this specimen also likely represents evidence of funerary treatment of a corpse in Italy during this time period.

The authors add: “An intriguing archaeological cold case: an isolated human cranium was found in the natural Marcel Loubens gypsum Cave (Bologna area, northern Italy) at the top of a vertical shaft, reached by an artificial 12-metre technical climb. How and when did it get there? Whose was it?

The cadaver (or head) of an early Eneolithic young woman was likely manipulated and dismembered in a funerary or ritual context and the skull, after a long and bumpy ride, accidentally ended up in the cave in the position in which it was found!”


Citation:
Journey of a skull: How a single human cranium wound up alone in a cave in Italy (2021, March 3)
retrieved 3 March 2021
from https://phys.org/news/2021-03-journey-skull-human-cranium-wound.html