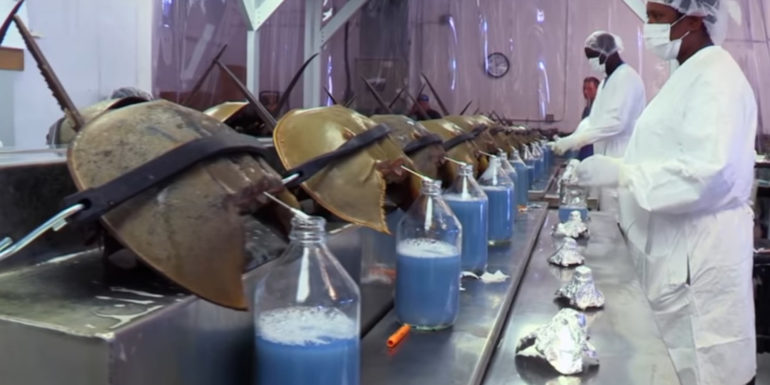 You don’t survive for 450 million years without learning a trick or two. In the case of horseshoe crabs, one of those is developing blood with remarkable antibacterial properties. Humans haven’t been around nearly as long, but we learn fast, including how to harness those properties in ways that save our lives, but aren’t so great for the crabs.

The most obviously unusual aspect of crab blood is that it is bright blue, a consequence of using copper-based hemocyanin to transport oxygen where vertebrates use iron in hemoglobin. Instead of white blood cells to fight infection, many invertebrates have amebocytes, and Atlantic horseshoe crabs (Limulus polyphemus) have evolved these to such a peak of refinement that they are of enormous medical value.

Horseshoe crab amebocytes coagulate around as little as one part in a trillion of bacterial contamination. Even better, the reaction takes 45 minutes, not two days as with mammalian equivalents. Coagulan, the chemical that makes this possible, is used for testing medical equipment and vaccines prior to use, without which many more people would die from infections. Unfortunately, coagulan synthesis is in its infancy so a quarter of a million crabs are harvested each year for their blood, as shown in this video:

There is also a longer version here.

Unfortunately, overharvesting in North America has led to a decline in crab populations, with worrying implications if this continues. In order to sustain the species, the harvesters take 30% of the blood from each crab, after which they are returned to the ocean. While this portion of blood is…