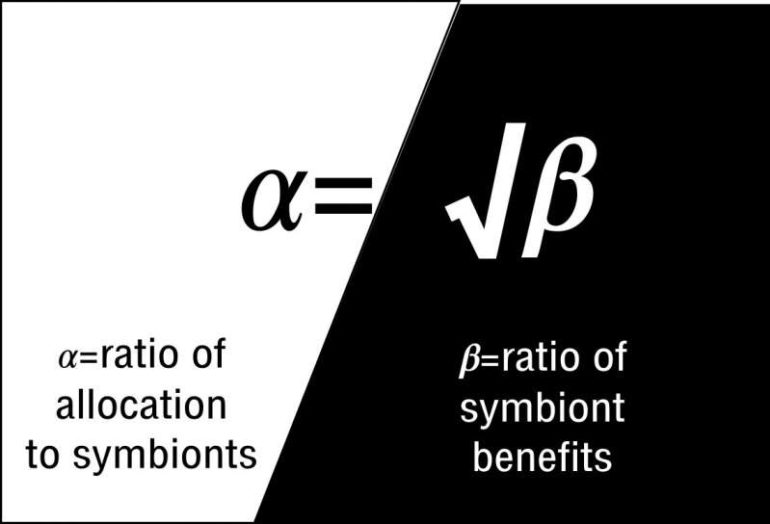 “Equal pay for equal work,” a motto touted by many people, turns out to be relevant to the plant world as well. According to new research by Stanford University ecologists, plants allocate resources to their microbial partners in proportion to how much they benefit from that partnership.

“The vast majority of plants rely on microbes to provide them with the nutrients they need to grow and reproduce,” explained Brian Steidinger, a former postdoctoral researcher in the lab of Stanford ecologist Kabir Peay. “The problem is that these microbes differ in how well they do the job. We wanted to see how the plants reward their microbial employees.”

In a new study, published July 6 in the journal American Naturalist, the researchers investigated this question by analyzing data from several studies that detail how different plants “pay” their symbionts with carbon relative to the “work” those symbionts perform for the plants—in the form of supplying nutrients, like phosphorus and nitrogen. What they found was that plants don’t quite achieve “equal pay” because they tend not to penalize low-performing microbes as much as would be expected in a truly equal system. The researchers were able to come up with a simple mathematical equation to represent most of the plant-microbe exchanges they observed.

“It’s a square root relationship,” said Peay, who is an associate professor of biology in the School of Humanities and Sciences. “Meaning, if microbe B does one-quarter as much work as microbe A, it still gets 50 percent as many resources—the square root of one-quarter.”

When the researchers tested their equation against 13 measurements of plant resource exchange with microbe partners, they were able to explain around 66 percent of the variability in the ratio of plant payments to two different microbes.

“The biggest surprise was the simplicity of the model,” said Steidinger. “You don’t get a lot of short equations in ecology. Or anywhere else.”

The fruit of frustration

When asked about the motivation for developing this equation, Steidinger summed it up with one word: Frustration.

“There is a lot of really interesting literature in a field called ‘biological market theory’ that deals with how plants should preferentially allocate resources. But for the folks who actually run experiments, it is difficult to translate these models into clean predictions,” said Steidinger. “We wanted to make that clean prediction.”

An informal survey of the Peay lab members encouraged the researchers to start with the assumption of equal pay because most people agreed it was reasonable to guess that plants treat all microbes the same. To reach their final equation, Steidinger and Peay then factored in the diminishing returns seen in the fertilizer models and assessed them through the lens of biological market theory literature—which uses human markets as a mathematical analogy for exchanges of services in the natural world.

“It turns out if the plant is flush with resources—in this case, the sugars it feeds to its microbes—and if the nutrients are valuable enough, the plant pays its microbes according to a square-root law,” said Peay.

The square-root model is a strong start to addressing Steidinger’s original frustration but it is not quite at the level of realism he wants to eventually achieve.

“For instance, our model allows a useless microbe to be fired without the plant losing resources,” said Steidinger. “But, just as in the human world, it takes an investment to hire a microbe and that initial investment is a gamble that microbial layabouts can consume at their leisure.”

In an attempt to explain why plants follow the square-root model, the researchers turned to a law in psychology. Weber’s Law addresses how humans perceive differences in stimuli, such as noise, light or the size of different objects. It explains that, the stronger the stimuli, the worse we are at identifying when it changes. This law has been shown to hold for many non-human animals as well—describing, for example, how birds and bats forage for food and how fish school. Now the researchers suggest it’s a good analogy for their plant payment scheme too.

“Our model says that plant should go easy on low-performing microbes, seemingly overpaying the 25-percent-as-good microbe with 50 percent as much resources,” said Peay. “Well, it’s long been known that humans and non-human animals sense differences in quantity in a way that might bias them towards similar leniency.”

China is cracking down on mobile web browsers

In other words, the researchers suggest that like a human trying to detect the volumes of specific noises in a loud room, a plant making optimal payment decisions may be relatively insensitive to differences in the quality of its microbial employees. And the researchers argue that this insensitivity may be for the best, as it encourages plants to maintain a certain level of microbial diversity, which can help give the plant options for dealing with environmental changes it encounters throughout its lifetime.

“I think what we’re seeing is plants behave like animals not because they have the same perceptional limitations—and certainly not because they think like animals—but because we face similar challenges in making the best choices when there are diminishing returns on investment,” says Steidinger.