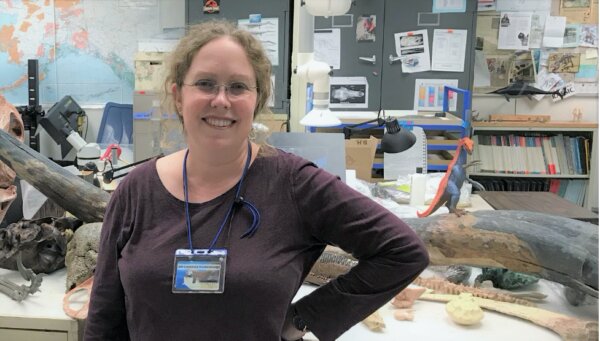 Polar bears are often considered the poster-child species for climate change impacts. With global warming and sea-ice declines, it becomes harder for polar bears to hunt their preferred prey—seals. Increased global temperatures are having the greatest impact on Arctic and Antarctic environments, with arctic polar bears projected to decline by 30 percent by 2050.

Larisa DeSantis, paleontologist and associate professor of biological sciences, with former undergraduate student Ansley Petherick, set out to assess if and how the diet of polar bears differed during periods of rapid warming.

The study, “Dietary ecology of Alaskan polar bears (Ursus maritimus) through time and in response to Arctic climate change” published in the journal Global Change Biology on April 1, showed that polar bears have maintained highly specialized diets of soft blubber and flesh—even during previous periods of Arctic warming.

“We were really surprised that polar bears consumed soft foods, even during the Medieval Warm Period, a previous period of climate change that occurred approximately 1,000 years ago,” DeSantis said.

By using a technique called dental microwear texture analysis, which analyzes microscopic wear on tooth surfaces to infer the textural properties of foods an animal consumed when it was alive, the researchers tracked dietary behavior of polar bears over hundreds to thousands of years. They examined polar bear skulls from museums like the University of Alaska Museum of the North in Fairbanks, Alaska, in collaboration with archeologists at the University of Alaska and Portland State University.

“Looking to the diets of polar bears in the past helps us to understand and contextualize any changes that might be occurring in the present,” Petherick said. “Polar bears have historically consumed seals, and our work shows that in the past they have preferentially eaten very soft tissues, like energy-rich blubber.”

Polar bears became highly specialized after they diverged from brown bears approximately half a million years ago. Their skulls became elongated, and their molars are actually smaller than is typical for their body size. Eating blubber doesn’t cause major damage to the bears’ teeth and can be identified from the study of tooth wear surfaces.

“Polar bears are so specialized on hunting seals that they may have a harder time adapting to the warming Arctic,” said DeSantis, who specializes in dental microwear among carnivores. “The shift to eating hard foods in a handful of bears in the 21st century is also concerning. Polar bears may be reaching a tipping point and may now be forced to consume less-preferred foods.”

Unlike polar bears, grizzly bears are well adapted to eat hard foods like plant tubers or to scavenge carcasses when resources are limited. The changing terrain brought about by the warming climate also means that grizzly bears can venture farther north and compete with polar bears for whatever food is available.

“That situation does not favor the success of the highly specialized polar bear,” Petherick said. “The public has given a great deal of attention to the plight of the polar bear under global climate change, and rightfully so. These apex predators are specialized to a sea-ice hunting lifestyle, melting in the Arctic threatens their whole way of life.”

Polar bears, historically, are not the first threatened apex predator in the Western hemisphere.

“Unfortunately, history and pre-history repeats itself,” DeSantis said. “Highly specialized sabertooth cats went extinct at the end of the Pleistocene. Only animals that were already generalized or able to adapt survived. Specialists like the polar bear are at greater risk of extinction, especially if their habitat is literally melting away.”

Can polar bears and narwhals cling on as the ice shrinks?