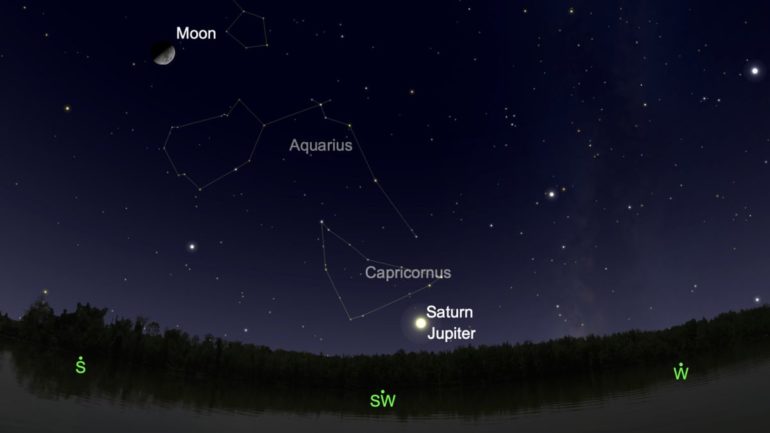 This year, stargazers will have the chance to see a Christmas “kiss” beneath interplanetary mistletoe when Jupiter and Saturn will appear closer to one another and brighter than they have in 800 years in an event known as a “great conjunction”.

What is happening and how rare is it?

On the 21 December solstice, the planets will look like one brilliant star as Jupiter’s and Saturn’s 12- and 29-year orbits bring them together. The last great conjunction was in May 2000, but its position in the sky meant it was difficult to see. The great conjunction of 1623 (when Galileo Galilei was still alive) was also hard to spot because, the Perth Observatory explains, it appeared close enough to the sun that it would have been “lost in the sun’s glare”.

“You’d have to go all the way back to just before dawn on 4 March 1226 to see a closer alignment between these objects visible in the night sky,” according to Patrick Hartigan, an astronomer from Rice University in Texas.

That is suspiciously near to Christmas day. Is there any relation to the Star of Bethlehem?

Funny you should ask. The Star of Bethlehem that guided the three wise men to the place of Jesus Christ’s birth may have been a great conjunction, too. As the Encyclopaedia Britannica explains, several conjunctions occurred “within 10 years of the chronological point now taken as the beginning of the Christian era”.

One of these was a conjunction of Jupiter and Saturn, which in 7BC were within one degree of each other three times in eight months. The Star of Bethlehem could also have been Venus and Jupiter, which in 2BC, “would have appeared to observers in Babylon to have merged just before setting in the general direction of Bethlehem to the west”.

How can I see it?

In 2020, the celestial phenomenon will be visible from anywhere on Earth, but conditions will be best near the equator, according to Hartigan. The Christmas “kiss” – as astronomer Dr Brad Tucker from the Australian National University has called it – will appear low in the western sky for roughly an hour after sunset.

Nasa said people should look for them low in the south-west in the hour after sunset when “the two giant planets will appear just a tenth of a degree apart – that’s about the thickness of a dime held at arm’s length.”

Tucker explained what to look for as “a thin crescent moon and two bright objects right next to it”.

After more than 20 years, scientists have solved the full-length structure of a Janus kinase

Fans can start practising now, because the planets are already edging closer together. All that is required are a night with clear skies and a vantage point with a clear horizon – no buildings or trees in the way, according to the Cambridge Independent.

Jupiter is the larger planet, and those with very good eyesight – or a pair of binoculars – will be able to distinguish it from Saturn. To others, the planets will appear as a single star. Planets tend to shine more steadily – or twinkle less visibly – than stars, so that might help you differentiate.

Enough science. What does this mean for my horoscope?

So you want to know what astrological havoc – or magic – the meeting of these planets might portend for your future.

According to astrology superstar Susan Miller, “The Grand Conjunction sets the tone for the ethos for the next 20 years affecting the arts, music, theatre, literature, entertainment, designer fashion, food, music, mathematics, science, politics, and the government agenda. In other words, everything!”