How to watch UFC 262: live stream Oliveira vs Chandler (and the rest) online today 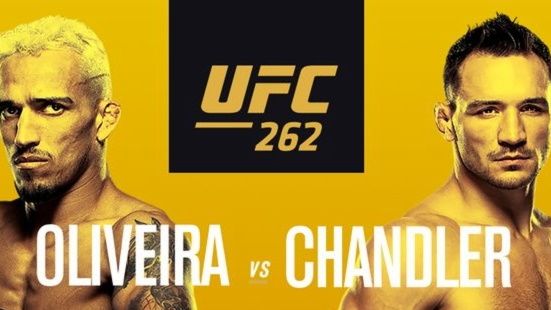 The Octagon heads to Texas today with a lightweight title bout between Charles Oliveira and Michael Chandler headlining UFC 262. Read on to discover how to find a UFC live stream and watch every match online with ESPN+ having exclusive coverage in the US.

With UFC legend Khabib Nurmagomedov having retired after successfully defending his title for a third time when he defeated Justin Gaethje at UFC 254, the lightweight belt now sits vacant and will be up for grabs at the Toyota Center in Houston in front of a full-capacity crowd on Saturday night.

Former three-time Bellator lightweight champion Chandler has only made one previous UFC appearance, but that debut was a sensational calling card first round knock out of Dan Hooker that has helped to fast track him to this title match

Oliveira meanwhile comes into the clash off the back of a formidable run, winning eight consecutive fights, seven of which came by stoppage. The Brazilian fighter holds the UFC record for submission victories, but that stat mask the fact that the 31-year-old is one of MMA’s most vertaile competitors.

UFC 262 live stream: how to watch Oliveira vs Chandler in the US

See UFC 262 exclusively on ESPN+ PPV
The exclusive rights for US coverage is with ESPN Plus UFC, meaning it is the one place to watch it. Early prelim coverage starts at 6.30pm ET / 3.30pm PT, followed by the main card at 10pm ET / 7pm PT, with Oliveira vs Chandler expected to enter the Octagon some time from 12am ET / 9pm PT – depending on the pace of the other fights.

There are three options on cost, which depend on whether or not you already subscribe to the service.

If you already enjoy the fruits of ESPN Plus, then it’s very straight forward. It’s a classic pay-per-view scenario, and you’ll need to spend $69.99 to watch UFC 262.

If you don’t yet subscribe to ESPN Plus, then you can take advantage of this great value offer. You’ll need to go for the UFC Bundle, costing you $89.98. That gets you both the UFC 262 PPV and a year-long subscription to ESPN+ that would normally cost $60 alone!

Your final option is to buy access to UFC 262 for $83.98 and, with it, get one month of access to the Disney Plus Bundle. So that’s a jam-packed 30 days of everything on Disney Plus – think all of Marvel, Pixar, The Simpsons, Star Wars and stacks more – the full catalog of live sports and documentaries on ESPN+, AND the hundreds of box sets and films on Hulu.
View Deal

How to live stream UFC 262 without PPV in Europe

As we say, you’re kind of stuck if you’re in the US. It’s PPV or bust.

Not so in Europe – probably because it’s on during the middle of the night! Instead, it’s sports streaming specialist DAZN that has the rights.

So if you’re a UFC fan in any of Austria, Italy, Germany or Spain, then get yourself over to the DAZN website.

Even better news…you can actually watch absolutely FREE in certain regions (we can confirm that is the case in Germany, Austria and Spain, for example). That’s thanks to a 30-day free trial, that you can take advantage of if you’ve never had a subscription before.View Deal

How to watch Oliveira vs Chandler: live stream UFC 262 in the UK

BT Sport has exclusive broadcast rights to UFC events right now, and the great news is that this weekend’s UFC 262 action won’t be a PPV event in the UK!

You’ll need to tune into BT Sport 1 for all the action from Vegas, with coverage beginning on the channel with their build-up preview show at 12.30am on Saturday night followed by coverage of the prelims prelims 1am midnight ahead of the main show at 3am in the early hours of Sunday morning. Oliveira vs Chandler are expected to enter the Octagon after 5am.

There are a host of pay-per-view providers offering a Oliveira vs Chandler live stream in Canada this month.

You’ll find UFC 262 and Oliveira vs Chandler available on PPV in Australia, with the main provider being Foxtel Main Event and will set you back AUD$54.95.

The main Oliveira vs Chandler card is set to take place at 12pm AEST on Sunday, May 16 which means you won’t have to get up early to catch the main event.

Oliveira vs Chandler are expected to make their way toward the Octagon around 1.30 pm AEST.

Oliveira vs Chandler live stream: how to watch UFC 262 in New Zealand now

Sky Arena is offering New Zealand viewers a Oliveira vs Chandler live stream – with the PPV priced at NZ$39.95 for all the main card action.

You’ll want to make sure you’re watching from at least the 2pm NZST main card start time on Sunday, May 16 to get all the action.

The headline Oliveira vs Chandler fight is expected any time from 3.30pm NZDT, depending on how the rest of the card plays out.

When is Oliveira vs Chandler? UFC 262 date and time

Oliveira vs Chandler preview and predictions

Having only fought once in UFC, Chandler’s critics say its hard to justify his appearance in tonight’s title fight. Nevertheless,  Chandler’s record as a champion in Bellator speaks for itself and his aggressive fighting style will almost certainly cause Oliveira problems.

While Chandler appears to be the harder hitter, Oliveira’s ground skills are unparalleled, and if can get his opponent on the mat, the Brazilian will likely take the belt.

Who is Charles Oliveira?

Having worked his way through the ranks in a number of Brazilian promotions, Oliveira made his UFC debut in 2010, but was initially written off as a middling contender, chalking up an unimpressive 10-8 record between 2012 and 2017.

The 31-year-old has since gone on to elevate his reputation with an eight-fight win streak that has earned him this opportunity to become champion.

Who is Michael Chandler?

Missouri-born Michael Chandler is a former three-time Bellator lightweight champion. His impressive UFC debut in January, saw him knock out Dan Hooker in the first round at UFC 257.

That win served to enhance his reputation as one of MMA’s heaviest hitters, while his aggressive, attack-first style has made him a huge hit with fans.

Oliveira vs Chandler latest odds: who is the favorite to win?

With his impressive win streak, the bookies are unsurprisingly favouring Oliveira to win title this fight with his odds currently hovering around the 8/11 mark, with Chandler taking the belt balanced out at around 11/10.

Oliveira’s last visit to the Octagon saw him register a unanimous points decision against Tony Ferguson back in December at UFC 256.

Chandler’s last fight was his explosive debut appearance in this promotion back in January at UFC 257, where he delivered a Performance of the Night display to snuff out Dan Hooker via TKO in the first round.

The Oliveira vs Chandler fight tops a stacked UFC 262 bill which also sees Tony Ferguson looking to bounce back from his two recent defeats against the impressive Beneil Dariush in another massive lightweight clash.

The bill also boasts another potential “Fight of the Night” contender with Edson Barboza’s featherweight match-up with Shane Burgos with both fighter’s looking to tee up a title bid in the 145 lbs division.

Sadly a welterweight showdown between Leon Edwards and Nate Diaz that was due to be a co-headline fight on the card has had to be put back following an injury to Diaz.