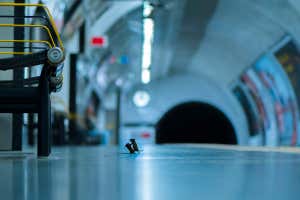 The dim light of the London Underground illuminates these two mice tussling over a morsel of food in this year’s winning entry for the Wildlife Photographer of the Year LUMIX People’s Choice Award. Aptly named “Station Squabble”, photographer Sam Rowley was rewarded with this fleeting sight after patiently lying in wait on the platform, where mice can often be seen scurrying about in search of delicacies dropped by the millions of commuters that use the underground each day.

Among the highly commended entries to the award was the image below by Aaron Gekoski. Taken at Safari World in Bangkok, Thailand, it shows an orangutan in a rare moment of quiet, before it is forced to take to the stage again in front of a paying audience. Safari World continues to put on shows of orangutans boxing, dancing and playing the drums twice a day, despite international calls for it to stop.

Curious black eyes poking out from the snow, shown below, greeted photographer Francis De Andres in Svalbard, an archipelago in the Arctic Ocean. The extreme weather doesn’t seem to faze these arctic reindeer, who are well adapted to the freezing temperatures, which can reach -20°C in some areas.

The Wildlife Photographer of the Year exhibition, a showcase of the world’s best nature…