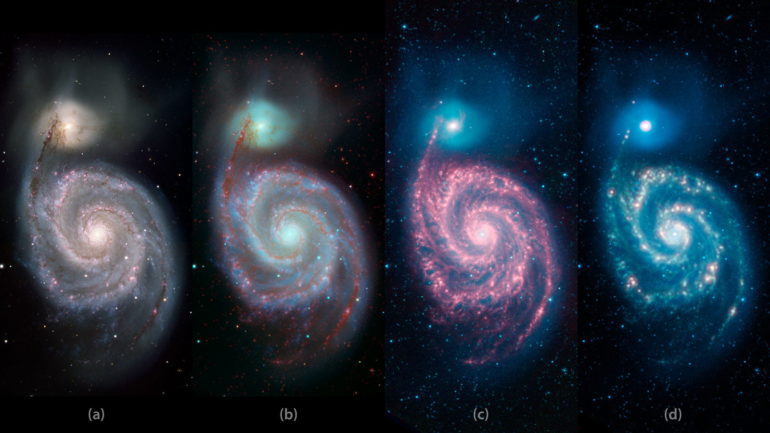 Have you ever wondered why sometimes telescopes capture light in the visible spectrum, and other times in infrared? NASA has released these images of the Whirlpool galaxy, located in the constellation Canes Venatici, which demonstrate the value of collecting data at different wavelengths.

The image shows the same galaxy as seen through different wavelengths of light. On the left, in image (a), you see the Whirlpool in the visible light spectrum, at 0.4 microns (shown in blue) and 0.7 microns (shown in red).

This would be how the galaxy would appear to your eye if you observed it through a powerful telescope. In this case, the image was captured with the Kitt Peak National Observatory 2.1-meter (6.8-foot) telescope. The dark swirls you see between the stars are made of dust which blocks a lot of the visible light coming from stars behind it.

New study shows sick gorillas transmit illnesses to others nearby

In image (b), you see a combination of two data sources. Firstly is the Kitt image (a), and added to this is the data from the Spitzer Telescope which records infrared wavelengths. By combining these two data sources, you can see details that were not visible in the first image. Where…