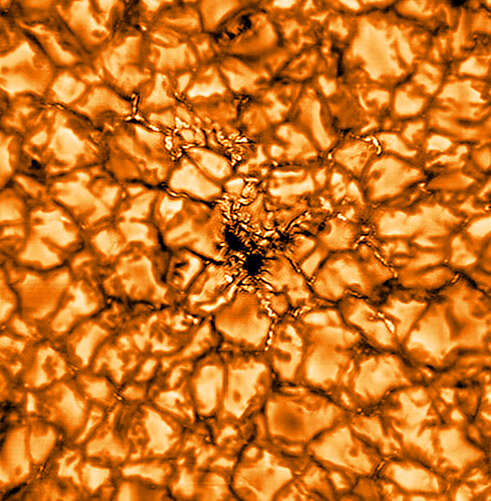 The year 2020 will certainly have plenty of negative memories associated with it but if we are looking for positives, these first nine months have delivered us some incredible observations of the Sun, from Earth and from Space. The newly upgraded GREGOR telescope has just added to these with a fantastic contribution.

GREGOR, the largest solar telescope in Europe, was able to resolve details as small as 50 kilometers (31 miles) on the surface of the Sun. Given the size of the Sun and its distance from us, this is like observing a needle on a soccer field in high resolution from an altitude of 1 kilometer. The incredible new upgrades are detailed in Astronomy & Astrophysics.

“This was a very exciting, but also extremely challenging project. In only one year we completely redesigned the optics, mechanics, and electronics to achieve the best possible image quality,” lead author Dr Lucia Kleint, who leads the German solar telescopes on Tenerife, said in a statement.

Telescopes are very complex instruments so upgrading them requires a long time, both to work out the best options and also to build the correct solution to the optical limitations. The team had a technical breakthrough during lockdown earlier this year when they were stranded in the observatory. The extra time allowed them to improve GREGOR by substituting two optical elements that have been designed and polished to a 6-nanometer precision – roughly, less than 1/10,000th of the width of a human hair.

“The project was rather risky because such telescope upgrades usually take years, but the great team work and meticulous planning have led to this success. Now we have a powerful instrument to solve puzzles on the Sun,” said co-author Dr Svetlana Berdyugina, professor at the Albert-Ludwig University of Freiburg and Director of the Leibniz Institute for Solar Physics (KIS).

The upgraded instrument reopened in July and allowed researchers to take the highest resolution images ever taken of the Sun by a European telescope, revealing spectacular details of sunspot evolution and structures in solar plasma. It will now allow solar scientists to study magnetic fields, convection, turbulence, solar eruptions, and sunspots in amazing detail. GREGOR, together with the Daniel K. Inouye Solar Telescope, rocket mission Hi-C, and space missions like the Parker Solar Probe and the Solar Orbiter, is opening an incredible new chapter on our study of the Sun.