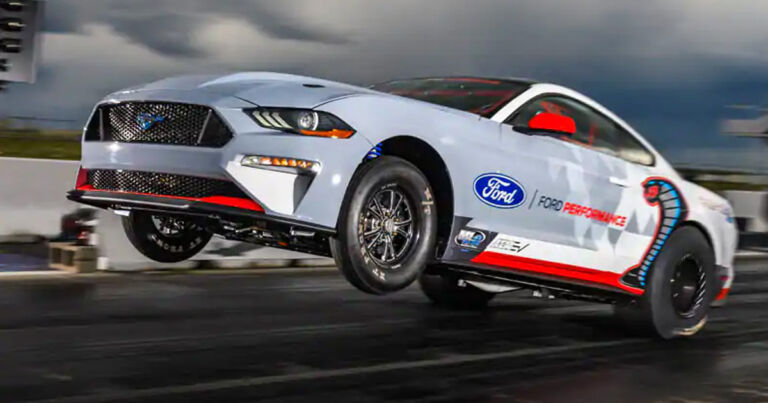 Ford is gunning to become the name brand of choice when it comes to the new generation of American all-electric muscle cars — and with its one-off Mustang Cobra Jet 1400 prototype, dubbed the “all-electric action hero,” it might just have a shot to take first place.

The vigorous electric powertrain on wheels delivers a rubber-melting 1,400 horsepower and over 1,100 pound feet of torque, served up immediately with a single press of a pedal.

During a private test, Ford engineers were able to squeeze just over 1,500 horsepower out of the 800 volt powertrain, the company claims.

The Cobra Jet features four motors that spin at up to 10,000 revolutions per minute. Its battery pack can put out 350 kW — per motor.

It’s so much unbridled performance, the car can barely keep itself grounded. In a new video uploaded by Ford’s Performance division, the vehicle pops a wheelie as it screams down the drag strip.

“Since revealing the car, we’ve continued to fine-tune it and now know we’re just scratching the surface of what we may be able to achieve with this much electric horsepower in a drag racing setting,” Mark Rushbrook, global director at Ford Performance Motorsports, said in a statement.

There’s only a slim chance you’ll be able to buy one any time soon, though. Ford has, however, announced the Mustang Lithium, a 900 horsepower all-electric muscle car. There’s also the Mustang Mach-E.