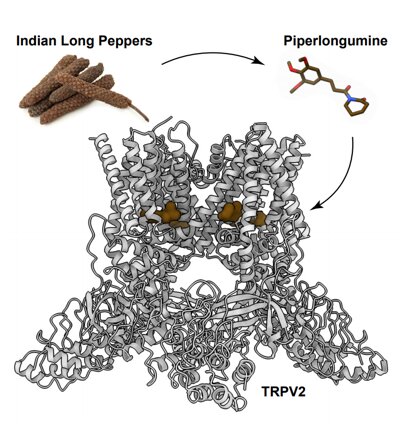 Piperlongumine, a chemical compound found in the Indian Long Pepper plant (Piper longum), is known to kill cancerous cells in many tumor types, including brain tumors. Now an international team including researchers from the Perelman School of Medicine at the University of Pennsylvania has illuminated one way in which the piperlongumine works in animal models—and has confirmed its strong activity against glioblastoma, one of the least treatable types of brain cancer.

The researchers, whose findings were published this month in ACS Central Science, showed in detail how piperlongumine binds to—and hinders the activity of—a protein called TRPV2, which is overexpressed in glioblastoma in a way that appears to drive cancer progression. The scientists found that piperlongumine treatment radically shrank glioblastoma tumors and extended life in two mouse models of this cancer, and also selectively destroyed glioblastoma cells taken from human patients.

“This study gives us a much clearer picture of how piperlongumine works against glioblastoma, and in principle enables us to develop treatments that can be even more potent,” said study co-senior author Vera Moiseenkova-Bell, Ph.D., an associate professor of Pharmacology and faculty director of the Electron Microscopy Resource Laboratory and Beckman Center for Cryo Electron Microscopy at Penn Medicine.

The study was a collaboration led by the laboratory of co-senior author Gonçalo J. L. Bernardes, DPhil, of the Institute of Molecular Medicine, University of Lisbon and the University of Cambridge.

“We are thrilled with the prospect of bringing our findings from bench to bedside to make a real impact on the health of people suffering from this horrendous disease,” Bernardes said.

The project began as a broad investigation of how piperlongumine exerts an anticancer effect. Bernardes and colleagues used an advanced machine-learning strategy to determine that the compound likely interacts with a family of proteins called TRP ion channels.

Ion channels are tiny molecular tubes that typically sit within cell membranes and allow incoming or outgoing flows of charged molecules (ions), such as calcium, potassium, and sodium. The channels usually are sensitive to some stimulus—a class of chemicals, mechanical force, or temperature, for example—which opens or closes the channels, effectively regulating the ion flow. Initial experiments by Bernardes and colleagues revealed that piperlongumine acts as an inhibitor—a channel closer—of a type of TRP ion channel called TRPV2, which exists in many cell types but has functions that are not well understood.

The researchers then turned to Moiseenkova-Bell, whose lab specializes in cryo-electron microscopy (cryo-EM) and has deep experience using that technology to determine the high-resolution structural details of TRP ion channels. She and her team were able to show precisely where piperlongumine binds to TRPV2 to inhibit its activity.

Bernardes and colleagues, in another set of experiments, examined a broad array of cancers and determined that glioblastoma multiforme, the most common form of brain cancer and one that is notoriously difficult to treat, overexpresses TRPV2 and is highly sensitive to its loss. Moreover, they linked higher levels of TRPV2 to greater aggressiveness in the tumor and poorer prognosis for the patient.

Brain cancers like glioblastoma are hard to treat with ordinary drugs in part because drug molecules usually don’t cross easily from the bloodstream into the brain. The team therefore devised a hydrogel-type scaffold that could be filled with piperlongumine and implanted. They showed in two different glioblastoma mouse models that their piperlongumine-filled scaffold, which releases piperlongumine in the area of a tumor for about eight days at a time, destroyed the glioblastomas almost completely and greatly extended mouse survival beyond that of untreated mice. The researchers obtained similar results against glioblastoma cells from human patients.

Bernardes and colleagues are now working to develop their approach in further preclinical studies, with the hope of one day testing it in clinical trials with glioblastoma patients. In addition, Moiseenkova-Bell’s structural findings will enable the researchers to experiment with piperlongumine and modified versions of it to develop an even stronger and more selective inhibitor of TRPV2.

Moiseenkova-Bell and her lab are also investigating molecular mechanisms of TRPV2 gating and more generally what TRPV2 does in the human body.

Why is data analysis so crucial for a company today?