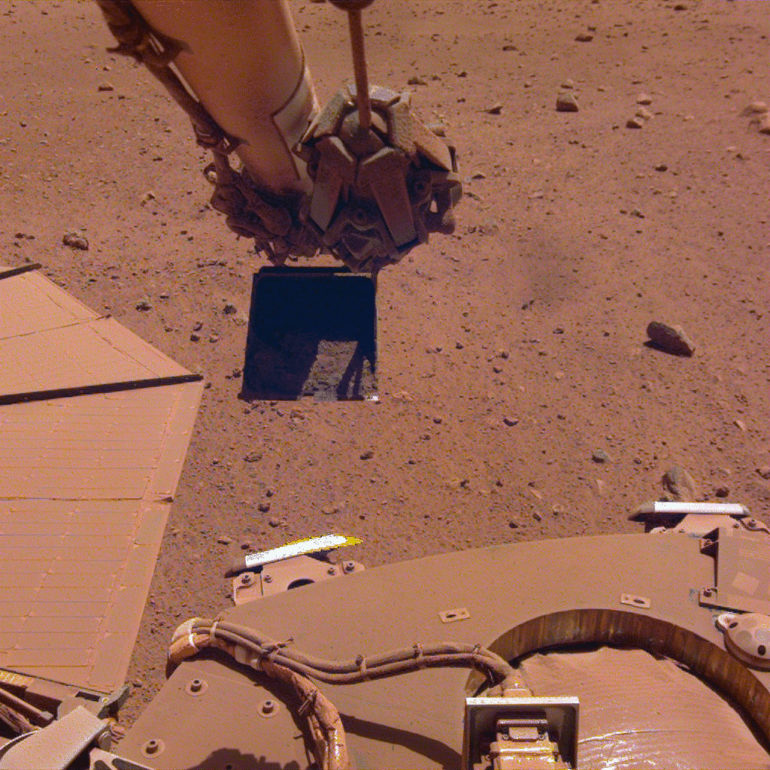 The team behind NASA’s InSight Mars lander has come up with an innovative way to boost the spacecraft’s energy at a time when its power levels have been falling. The lander’s robotic arm trickled sand near one solar panel, helping the wind to carry off some of the panel’s dust. The result was a gain of about 30 watt-hours of energy per sol, or Martian day.

Mars is approaching aphelion, its farthest point from the Sun. That means less sunlight reaches the spacecraft’s dust-covered solar panels, reducing their energy output. The team had planned for this before InSight’s two-year mission extension. They’ve designed the mission to operate without science instruments for the next few months before resuming science operations later this year. During this period, InSight will reserve power for its heaters, computer, and other key components.

The power boost should delay the instruments being switched off by a few weeks, gaining precious time to collect additional science data. The team will try to clear a bit more dust from the same solar panel this Saturday, June 5, 2021.

Dust in the Wind

InSight’s team has been thinking up ways to try to clear dust from its solar panels for almost a year. For example, they tried pulsing the solar panel deployment motors (last used when InSight opened its solar panels after landing) to shake the dust off but didn’t succeed.

More recently, several members of the science team started pursuing the counterintuitive technique of trickling sand near—but not directly on top of—the panels. Matt Golombek, a member of the InSight science team at NASA’s Jet Propulsion Laboratory in Southern California, which manages the mission, noted that it might be possible to strike dust on the panels with sand grains that would “saltate,” or hop off the solar panel surface and skip through the air in the wind. The larger grains might then carry off the smaller dust particles in the wind.

To try the technique, the team used the scoop on InSight’s robotic arm to trickle sand next to InSight’s solar panels on May 22, 2021, the 884th sol of the mission, at around noon Mars time—the windiest time of day. It was easiest for InSight’s arm to be positioned over the lander’s deck, high enough for the winds to blow sand over the panels. Sure enough, with winds blowing northwest at a maximum of 20 feet (6 meters) per second, the trickling of sand coincided with an instantaneous bump in the spacecraft’s overall power.

“We weren’t sure this would work, but we’re delighted that it did,” Golombek said.

While it’s no guarantee that the spacecraft has all the power it needs, the recent cleaning will add some helpful margin to InSight’s power reserves.

InSight’s panels have outlasted the two-year prime mission they were designed for and are now powering the spacecraft through the two-year extension. Relying on solar panels for power enables such missions to be as light as possible for launch and requires fewer moving parts—thus, fewer potential failure points—than other systems. Equipping the spacecraft with brushes or fans to clear off dust would add weight and failure points. (Some members of the public have suggested using the Ingenuity Mars Helicopter’s whirring blades to clear off InSight’s panels, but that’s not an option, either: The operation would be too risky, and the helicopter is roughly 2,145 miles, or 3,452 kilometers, away.)

However, as the Spirit and Opportunity Mars rovers showed, gusts and whirlwinds can clear solar panels over time. In the case of InSight, the spacecraft’s weather sensors have detected many passing whirlwinds, but none have cleared any dust.

Plankton will store more carbon as Earth’s climate warms, but storage beyond the end of the century is uncertain

By August, as Mars moves in its orbit closer to the Sun, InSight’s solar panels should be able to gather more energy, allowing the team to turn the science instruments back on. Depending on the available power, they might begin by turning some on for short periods at key times during the day, as they’ve been doing to save energy.

Whether the instruments are on or off, InSight operations will pause again around Oct. 7, when Mars and the Earth will be on opposite sides of the Sun. Known as Mars Solar Conjunction, this period happens every two years. Because plasma from the Sun can interrupt radio signals sent to spacecraft at that time, all of NASA’s Mars missions will become more passive, continuing to record data and send updates to engineers on Earth, though no new commands will be sent back to them. The moratorium on Mars commands will last several weeks until late October.

InSight is meeting the challenge of winter on dusty Mars