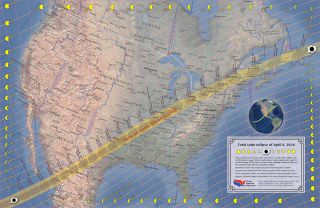 Wednesday (Aug. 21) marked the two-year anniversary of the Great American Solar Eclipse, and if you are eager to view the next celestial sensation to cross the North American skies, get ready for another eclipse treat on April 8, 2024.

According to a study led by researchers at the University of Michigan last summer, about 88% of American adults viewed the total solar eclipse in 2017 either directly or digitally. The total solar eclipse could be seen from Oregon to South Carolina along a 70-mile-wide (113 kilometers) path that appeared for up to 2 minutes and 40 seconds as the moon passed between the Earth and the sun, blocking all of the sun’s light, so that only its ethereal coronal halo could be seen. Outside of the path of totality, skywatchers got to enjoy the sight of a “bite” being taken out of the sun.

The 2017 solar eclipse was the first in nearly a century to cross the entire contiguous United States, the previous one having occurred in 1918. Although the 2024 solar eclipse won’t travel coast to coast within the United States, it will sweep across the North American continent, beginning in Mexico and traveling northeast toward Canada.

Solar eclipses are possible thanks to a coincidence: The moon, as seen from Earth, is almost the exact same size as the orb of the sun. The moon varies in its distance from our planet, and when it passes in front of the sun at a point when it’s farther from Earth than average, the moon’s apparent smaller shape doesn’t block the entire sun, and people on Earth view an annular solar…