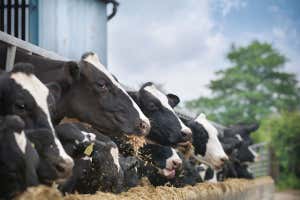 The amount of nitrogen pollution emitted just by global livestock farming is more than the planet can cope with, prompting scientists to say we need to eat less meat and dairy produce.

Fertilisers made for agriculture are high in nitrogen, but their use can contribute to air and water pollution, climate change and ozone depletion. Livestock waste is also a source of nitrogen pollution.

Aimable Uwizeye at the UN Food and Agriculture Organization and his colleagues found that the livestock sector accounts for about a third of all humanity’s nitrogen emissions, which are also released by burning fossil fuels and other activities.

The emissions from livestock farming amount to about 65 teragrams (Tg) of nitrogen a year. That means meat and dairy production alone breaches the lower limit of the 62 to 82 Tg a year considered to be the “planetary boundary” for nitrogen emissions, or the safe global level beyond which humanity’s future prosperity is endangered. Nitrous oxide, for example, is exacerbating global warming.

“The livestock sector contributes substantially to nitrogen emissions,” says Uwizeye. His team says that while there are technical fixes in agriculture, they may not be enough on their own to keep within planetary boundaries for nitrogen pollution, and some parts of the world will need to eat and produce less meat and…