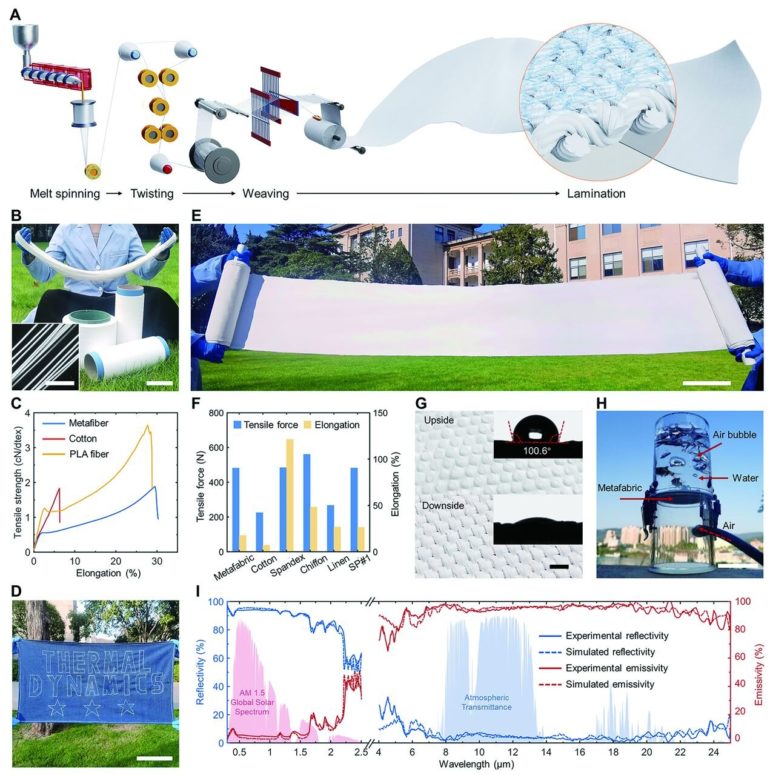 A team of researchers affiliated with multiple institutions in China has developed a micro-fiber based metafabric that provides wearers with daytime radiative cooling. In their paper published in the journal Science, the group describes making their fabric and their test results.

Currently, clothes manufacture use breathable, light colored materials when they make clothes meant to help customers remain cool in warm temperatures. The light colors help to reflect sunlight while the breathable aspect allows air to circulate around the skin. In this new effort, the researchers sought to improve on reflective clothes by designing a material capable of allowing mid-infrared radiation (MIR) produced by the body to escape into space.

Prior research has shown that when some types of radiation are emitted from an object, that object becomes cooler. Thus, clothes that can emit radiation would become cooler, helping to cool the person wearing them. Near-infrared radiation is one such form of radiation—it is emitted by the sun and warms the objects that absorb it. But it also cools the objects that emit it. Unfortunately, the cooling potential of near-infrared radiation is lost when it is emitted into the air around the object—it heats up water and other particles in the air, warming the body that is surrounded by it. MIR, on the other hand, is not captured by the atmosphere; it makes its way out into space. It was for this reason that the researchers chose to focus their work on a fabric that would emit the MIR emitted by human skin—though they also added reflective material to reflect sunlight.

The final design added titanium dioxide powder to polymer fibers to make them reflective, and adding polylactic acid to allow the material to emit MIR. The researchers created a fabric using a weaving technique that allowed air to circulate.

The researchers tested their material by using it to create a vest. One side of the vest was made of cotton, the other with the material they had developed. A volunteer wore the vest outside in the sun for an hour. Measurements of his skin temperature showed it to be almost 5 degrees Celsius cooler on the new material side. The researchers also note that in addition to reducing heat, clothes made of their material would be biodegradable.