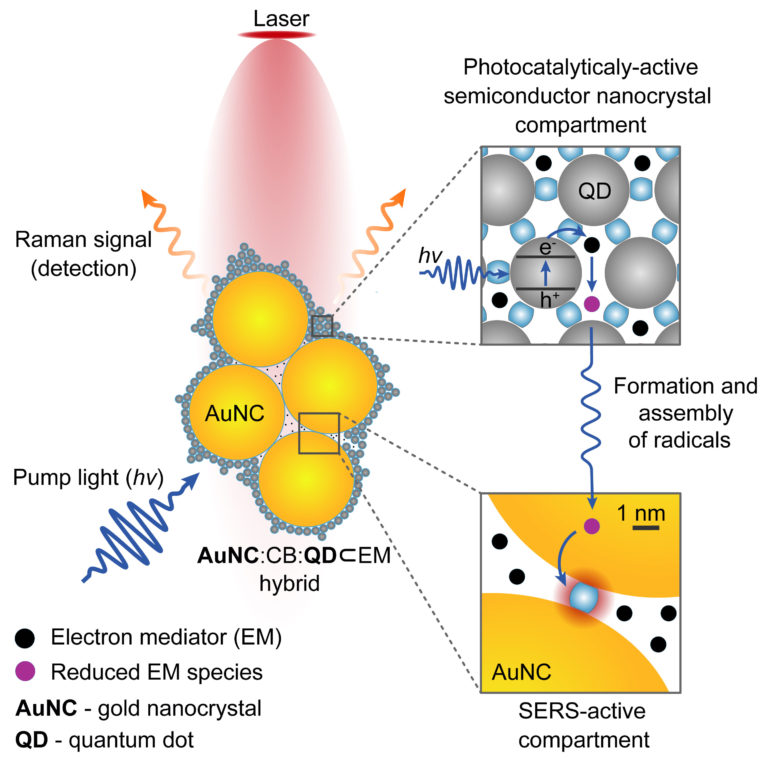 Researchers have made a tiny camera, held together with ‘molecular glue’ that allows them to observe chemical reactions in real time.

The device, made by a team from the University of Cambridge, combines tiny semiconductor nanocrystals called quantum dots and gold nanoparticles using molecular glue called cucurbituril (CB). When added to water with the molecule to be studied, the components self-assemble in seconds into a stable, powerful tool that allows the real-time monitoring of chemical reactions.

The camera harvests light within the semiconductors, inducing electron transfer processes like those that occur in photosynthesis, which can be monitored using incorporated gold nanoparticle sensors and spectroscopic techniques. They were able to use the camera to observe chemical species which had been previously theorized but not directly observed.

The platform could be used to study a wide range of molecules for a variety of potential applications, such as the improvement of photocatalysis and photovoltaics for renewable energy. The results are reported in the journal Nature Nanotechnology.

Nature controls the assemblies of complex structures at the molecular scale through self-limiting processes. However, mimicking these processes in the lab is usually time-consuming, expensive and reliant on complex procedures.

“In order to develop new materials with superior properties, we often combine different chemical species together to come up with a hybrid material that has the properties we want,” said Professor Oren Scherman from Cambridge’s Yusuf Hamied Department of Chemistry, who led the research. “But making these hybrid nanostructures is difficult, and you often end up with uncontrolled growth or materials that are unstable.”

The new method that Scherman and his colleagues from Cambridge’s Cavendish Laboratory and University College London developed uses cucurbituril—a molecular glue which interacts strongly with both semiconductor quantum dots and gold nanoparticles. The researchers used small semiconductor nanocrystals to control the assembly of larger nanoparticles through a process they coined interfacial self-limiting aggregation. The process leads to permeable and stable hybrid materials that interact with light. The camera was used to observe photocatalysis and track light-induced electron transfer.

“We were surprised how powerful this new tool is, considering how straightforward it is to assemble,” said first author Dr. Kamil Sokołowski, also from the Department of Chemistry.

To make their nano camera, the team added the individual components, along with the molecule they wanted to observe, to water at room temperature. Previously, when gold nanoparticles were mixed with the molecular glue in the absence of quantum dots, the components underwent unlimited aggregation and fell out of solution. However, with the strategy developed by the researchers, quantum dots mediate the assembly of these nanostructures so that the semiconductor-metal hybrids control and limit their own size and shape. In addition, these structures stay stable for weeks.

“This self-limiting property was surprising, it wasn’t anything we expected to see,” said co-author Dr. Jade McCune, also from the Department of Chemistry. “We found that the aggregation of one nanoparticulate component could be controlled through the addition of another nanoparticle component.”

When the researchers mixed the components together, the team used spectroscopy to observe chemical reactions in real time. Using the camera, they were able to observe the formation of radical species—a molecule with an unpaired electron—and products of their assembly such as sigma dimeric viologen species, where two radicals form a reversible carbon-carbon bond. The latter species had been theorized but never observed.

“People have spent their whole careers getting pieces of matter to come together in a controlled way,” said Scherman, who is also Director of the Melville Laboratory. “This platform will unlock a wide range of processes, including many materials and chemistries that are important for sustainable technologies. The full potential of semiconductor and plasmonic nanocrystals can now be explored, providing an opportunity to simultaneously induce and observe photochemical reactions.”

“This platform is a really big toolbox considering the number of metal and semiconductor building blocks that can be now coupled together using this chemistry– it opens up lots of new possibilities for imaging chemical reactions and sensing through taking snapshots of monitored chemical systems,” said Sokołowski. “The simplicity of the setup means that researchers no longer need complex, expensive methods to get the same results.”

Researchers from the Scherman lab are currently working to further develop these hybrids towards artificial photosynthetic systems and (photo)catalysis where electron-transfer processes can be observed directly in real time. The team is also looking at mechanisms of carbon-carbon bond formation as well as electrode interfaces for battery applications.

A catalyst that controls chemical reactions with light