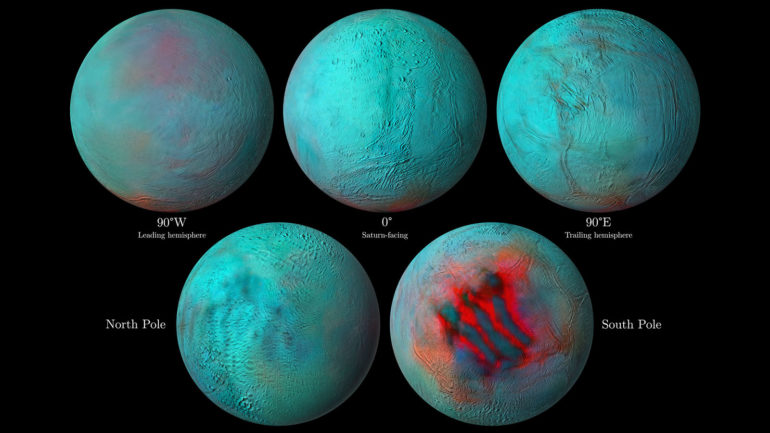 By digging through detailed infrared images of Saturn’s icy moon Enceladus — courtesy of NASA’s Cassini spacecraft, which met its demise back in 2017 after 13 years of Saturn exploration — NASA scientists say they’ve found “strong evidence” of fresh ice in the moon’s northern hemisphere.

The ice, thought to have originated and resurfaced from Enceladus’ interior, could be good news for the prospect of life on Enceladus, which is considered by many scientists to be one of the most promising places to look for life in the solar system.

The dataset, the most detailed global infrared views ever produced of the moon according to the agency, was created using data collected by Cassini’s Visible and Infrared Mapping Spectrometer (VIMS). It includes scans of variable wavelengths, including visible light and infrared.

In 2005, scientists first made the discovery that Enceladus shoots giant plumes of ice grains and vapor from a suspected subsurface ocean hiding underneath a thick crust of ice.

The new infrared signals perfectly match the location of this activity, made highly visible in the form of neon red “tiger stripe” gashes on the moon’s south pole.

Similar features have also been spotted in the northern hemisphere as well, leading scientists to believe that the same process is happening on both hemispheres.

“The infrared shows us that the surface of the south pole is young, which is not a surprise because we knew about the jets that blast icy material there,” Gabriel Tobie, VIMS scientist at the University of Nantes, France and co-author of a new paper about the findings published in the journal Icarus, said in a NASA statement.

How does a cell move? ‘Pull the plug’ on the electrical charge on the inner side of its membrane, say scientists

“Now, thanks to these infrared eyes, you can go back in time and say that one large region in the northern hemisphere appears also young and was probably active not that long ago, in geologic timelines,” he added.

In October 2019, a team of researchers from the Free University of Berlin found traces of organic compounds in the moon’s icy plumes that appear to be the building blocks of amino acids, the precursors of Earth-based lifeforms.